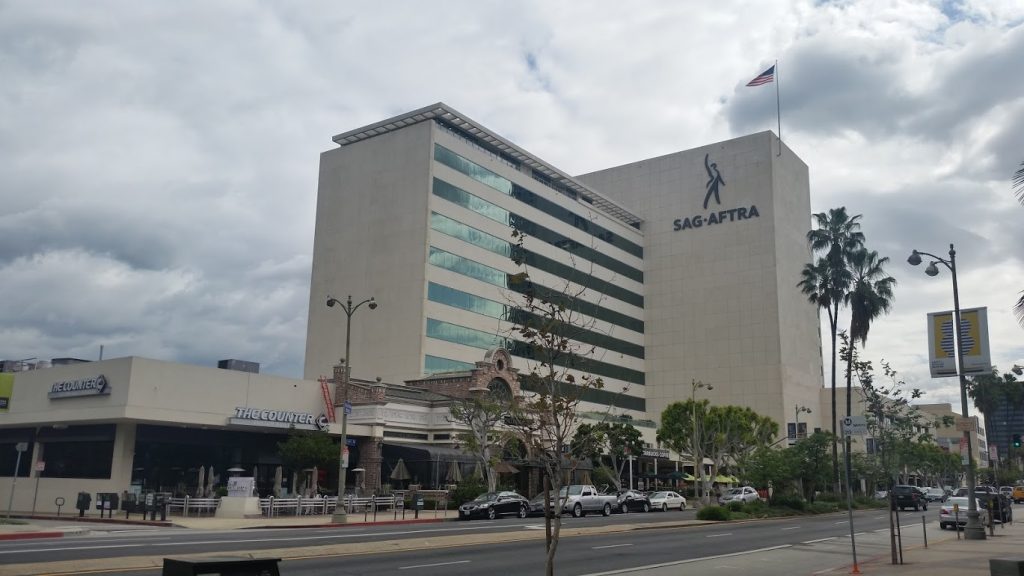 The labor union faced criticism over its “woefully inadequate” procedures for filing a harassment or discrimination complaint in 2017 when the first sexual assault allegations against former film producer and convicted rapist Harvey Weinstein emerged. [2][3] After its merger in 2012, SAG-AFTRA removed explicit references to “sexual harassment” as a cause for the board of directors to suspend or expel members from its constitution, changing the wording to “actions antagonistic to the interests or integrity of the union.” [4]

The Screen Actors Guild-American Federation of Television and Radio Artists (SAG-AFTRA) is a labor union that was formed in 2012 when the Screen Actors Guild, the labor union for film actors, merged with the American Federation of Television and Radio Artists, a labor union for on-screen television figures. SAG-AFTRA represents approximately 160,000 active members[5] and is controlled by a national board, executive committee, 25 local boards, and national and local committees. It also has a biennial convention to address amendments and resolutions. [6]

SAG-AFTRA reached a “tentative” agreement with 11 video game companies that it was boycotting for 11-months, between 2016 and 2017, on behalf of voice actors. The labor union began negotiations with large video game companies including EA, Activision, Disney Character Voices, Take-2 Interactive, and Warner Brothers in February 2015 before beginning a boycott of the industry in October 2016 after negotiations failed. [13]

SAG-AFTRA sought residuals and bonuses for voice actors that worked on a game that sold 2 million sales, downloads, or received 2 million subscribers, which capped at 8 million. The labor union also sought for less transparency on what voice actors would be working on, and compensation for vocal stress received during recording. [14]

The labor union came to an agreement in September 2017 when it reached a deal with the 11 companies it had been boycotting.

SAG-AFTRA did not manage to secure the residual payments for voice actors it had sought, but did come to an agreement that a “bonus payment” for its members would be paid based on the number of sessions worked for a game “beginning with a $75 payment on the first session and totaling $2,100 after 10 sessions worked.” [15]

The gaming news website Polygon interviewed several voice actors under the condition of anonymity due to “union rules.” Those interviewed described the strike as “frustratingly permanent,” and thought that SAG-AFTRA would not endanger its more important financial arrangements as according to one voice actor, they were “not the priority.” [16]

According to another actor who spoke to Polygon, the strike did not seem to affect the large companies as they were continuing to advertise “non-union interactive projects that paid huge salaries compared to almost any other post in any other category.” Polygon also stated that “everyone we spoke to repeatedly spoke about just wanting to do the work,” and that the voice actors interviewed were not “happy about the bread crumbs [sic] and incremental raises made.” [17]

For the condition of compensation due to vocal stress, the agreement amounted to “an employer commitment to continue working with SAG-AFTRA on the issue.” The condition of transparency was slightly improved as the deal ensured that a video game company would reveal the “codename” of the project to the voice actor, but not the actual name of the project nor its specific role. [18]

Harvey Weinstein, a former film producer and co-founder of Miramax Films, was sentenced to 23 years in prison in March 2020, after being convicted of a first-degree criminal sex act and third-degree rape of a woman while he was in the film industry. [19] Following the public revelation of allegations against Weinstein in October 2017, sexual harassment and assault complaints to SAG-AFTRA rose 500% over six weeks;[20] the public awareness of sexual misconduct allegations against producers and actors was credited with sparking the “MeToo” campaign against sexual misconduct. [21]

Before its merger with AFTRA, the Screen Actors Guild suspended Seymour Cassel for two years after it was deemed that he had engaged in “conduct unbecoming a member” for the “sexual harassment” of three female union staffers. This action was in line with SAG’s constitution, which allowed board members to expel or suspend members that committed “sexual harassment,” or those who acted in a way “unbecoming of a member.” [22]

After the merger, SAG-AFTRA changed its constitution to remove “sexual harassment” and “conduct unbecoming of a member.” Even after the accusations against multiple members of the union had occurred in 2017, the constitution of SAG-AFTRA stated that members could be expelled or suspended for “engaging in actions antagonistic to the interests or integrity of the union.” [23]

New York-based television, film, and theater actor Morgan Spector, criticized SAG-AFTRA in 2017 for its “woefully inadequate” procedures for filing a harassment or discrimination complaint. The labor union stated that those who wished to file a complaint would have to “consult with outside counsel,” or complete a complaint questionnaire which would then be discussed with “the EEO & Diversity staff” to discover if SAG-AFTRA should file a claim on the member’s behalf. [24]

This was eventually amended when the union created a code of conduct to combat sexual assault in 2018. SAG-AFTRA created the seven-page code to “end the pervasive culture of inaction and silence.” [26]