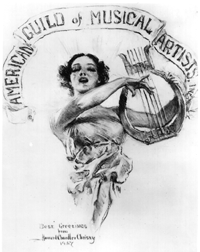 The American Guild of Musical Artists is a labor union that represents ballet dancers, opera singers, orchestra performers, and other performing artists. It is a member union of the Associated Actors and Artistes of America, a small union federation known as the 4As which also includes the Actors’ Equity Association (AEA), the American Guild of Musical Artists (AGMA), the American Guild of Variety Artists (AGVA), the Guild of Italian American Actors (GIAA), and Screen Actors Guild-American Federation of Television and Radio Artists (SAG-AFTRA). The AGMA is affiliated with the large left-leaning labor federation AFL-CIO indirectly through its membership in the 4As, which is an AFL-CIO affiliate. [1] [2]

The American Guild of Musical Artists was founded in 1936 as an association of solo musical artists. In 1937 the AGMA was chartered as a member union of the Associated Actors and Artistes of America (the “4As”) to cover the fields of grand opera, concert, and recital and began organizing performers across the country. The organization negotiated its first contract with the Southern California Symphony Association followed by the Chicago Opera Company and the Philadelphia Civic Grand Opera Company. [3]

The American Guild of Musical Artists collectively bargains on behalf of over 60 ballets, operas, orchestras, and choirs. Prominent organizations with which the union bargains include the Chicago Symphony Orchestra, the Metropolitan Opera, the New York Philharmonic, the San Francisco Symphony Chorus, and the New York City Opera. [4]

The AGMA remains an affiliate of both the 4As and the AFL-CIO. [5] The union is also a member of the Department of Professional Employees, AFL-CIO. [6]