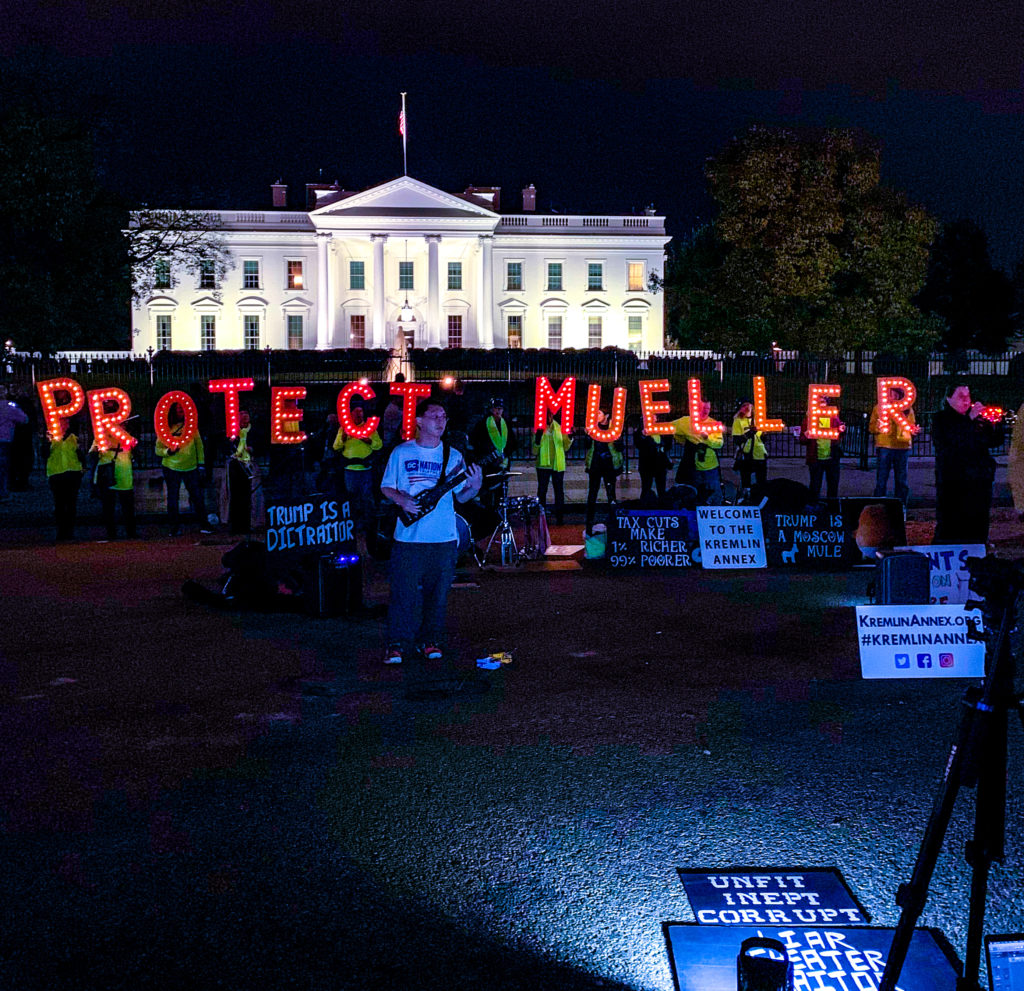 Kremlin Annex is a weekly protest group that gathers on the north side of the White House to protest President Donald Trump. Over time the protests have gone from alleging conspiracy between President Trump and the Russian Federation to a demonstration activity for general left-of-center issues. Kremlin Annex continues to hold protests at the White House despite dwindling numbers over 2019.

The Kremlin Annex is operated and funded by Party Majority PAC, created by former Hillary Clinton independent expenditure ally Adam Parkhomenko in 2017. The PAC funds the sound equipment and security for major guests and estimates that weekly costs for the protests range from $4,000 to $5,000. In addition to protests against President Trump, Kremlin Annex has staged protests against Supreme Court Justice Brett Kavanaugh and the government’s response to Hurricane Maria. One protester described President Trump’s actions as “literally reminds me of a slowly-rolling Soviet Union coming to the United States.” [1] The Kremlin Annex protests have raised $100,000 through 4,000 activists. [2]

After 90 days of activities, Kremlin Annex protests included Trump “baby balloons” and a four-foot cardboard cutout of President Trump and Vladimir Putin. Comedian Kathy Griffin was part of the protest and was also joined by an 18-person mariachi band playing protest songs against President Trump. [4]

In August of 2018, Rosie O’Donnell and Javier Munoz also joined the Kremlin Annex protests.  That same month, the National Park Service required that the protests move from the sidewalk in front of the White House to a portion back from the White House. [5] Rosie O’Donnell appeared at Kremlin Annex with 55 Broadway musical performers to sing “musical numbers from Les Miserables and The Sound of Music.”

After 13 months of protesting the Kremlin Annex, five activists were present at the White House. After almost a year of protests, the activists have resorted to “beating drums and cymbals, blaring a trumpet and horn, and shouting ‘liar’ and ‘traitor’ at the top of their amplified voices.”  During that same period, the Kremlin Annex protests began providing a platform for “furloughed workers and any other impacted folks who want to speak out.” [6]

In 2016, Mr. Parkhomenko mocked Senate Majority Leader Mitch McConnell (R-KY) after he slipped on some stairs despite McConnell having suffered from polio as a child. Parkhomenko did not back down from his statements and used his criticism to highlight how McConnell allegedly was trying to “take away people’s healthcare.” [8]

In October of 2018, Mr. Parkhomenko reportedly acted as a liaison between Democratic National Committee members and controversial activist lawyer Michael Avenatti who at the time was potentially running for President in 2020. Mr. Parkhomenko endorsed Michael Avenatti: “he’s absolutely the person I’m supporting in the 2020 primary, should he decide to run.” [9] In 2019, the federal government charged Avenatti with various offenses, including attempting to extort $20 million from Nike[10] and embezzling money from a high-profile client. [11]