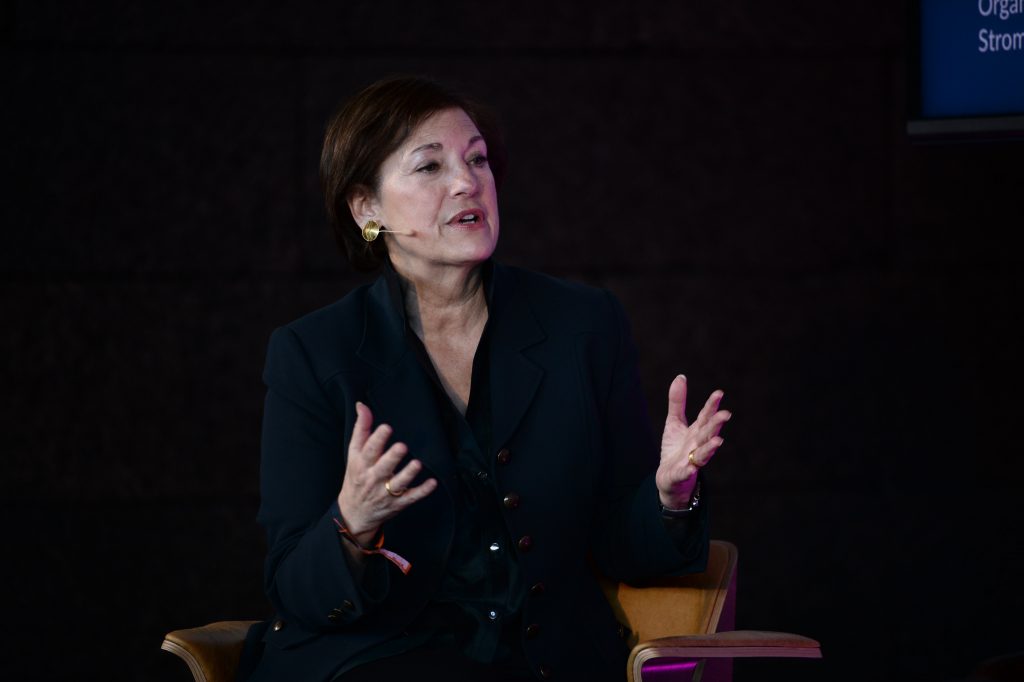 Zoe Baird is the president of the John and Mary R. Markle Foundation. She has held that position since 1998.

Prior to that, Baird served in the administration of U.S. President Jimmy Carter, the administration of U.S. President Bill Clinton, and in various positions in corporate America. She was Bill Clinton’s first nominee for Attorney General. However, she was forced to withdraw her nomination after it was revealed that she hired illegal immigrants and did not pay applicable Social Security taxes. [1]

Zoe Baird was born in Brooklyn in 1952. Her parents were a labor union official and an office administrator. [2]

Baird attended the University of California, Berkeley where she graduated Phi Beta Kappa with the highest honors in Political Science and Communications and Public Policy in 1974. She would later graduate law school at the University of California, Berkeley in 1977. [3] After graduating law school, Baird would clerk with U.S. District Judge Albert C. Wollenberg from 1977 to 1978. [4]

After her clerkship, Baird joined the U.S. Justice Department during the Carter administration. She was the attorney-advisor to the Office of Legal Counsel from 1979 to 1980. In that capacity, she prepared the legal opinions to the Attorney General on the constitutionality of government actions or conflicts between agencies. [5]

She was later promoted to associate counsel to the White House. In that capacity, she advised on issues such as the Iran hostage crisis and uranium sales to India. She would serve in that role until the end of the Carter administration in 1981. [6]

Baird stayed in Washington, D.C. to join the law firm O’Melveny & Myers. While there, she worked on U.S. Supreme Court cases. [7]

In 1986, she would enter corporate America, joining the legal department of General Electric. She handled legal matters and helped recruit in house attorneys from private law firms. [8]

In 1990, she left General Electric and became senior vice president and general counsel for the insurer Aetna. She would leave the company in 1996 for a stint at Yale Law School. [9]

In 1993, President Bill Clinton nominated Baird to be U.S. Attorney General. After her nomination, it came out that she hired an illegal immigrant couple from Peru as a baby sitter and a driver. In addition to hiring the illegal immigrants, she did not pay the applicable Social Security taxes. [10]

The Immigration and Naturalization Service ordered Baird to pay a $2,900 fine for hiring the couple. She also paid $8,000 in back Social Security taxes. [11]

Baird was forced to withdraw her nomination for Attorney General after 11 Senators from both parties opposed her nomination. Senator David Boren (D-OK) said that his office received 1,000 constituent calls about the Baird nomination and 80 percent of those calls opposed her. [12]

Baird would go on to serve on various commissions and panels under the Clinton administration. She joined the President’s Foreign Intelligence Advisory Board and served from 1994 until 2000. She would also serve on boards related to intelligence, terrorism, and weapons of mass destruction. [13]

In 1998, the John and Mary R. Markle Foundation named Baird its president. At the time, the foundation was focused on making grants on behalf of children’s education. Instead, she wanted to transform it to an organization that studies how the internet is used to address public needs. [14]

Her tenure came under criticism in 2002. When she took over the foundation, she promised to spend $100 million in three to five years. By 2002, only $40 million had been spent and nearly half of that went to administrative costs such as salaries and consulting fees. [15]

Activists also questioned the foundation’s effectiveness on promoting internet governance issues. One activist with the Center for Digital Democracy even called them “missing in action.” [16]

There was also massive staff turnover when Baird came on board. 33 out of 43 staffers left the organization. Some of those staffers complained of paralyzing micromanagement, indecision, and obsession with image. [17]

Baird currently sits on the board of the Council on Foreign Relations, serves as a senior trustee of the center-left Brookings Institution, and serves as a member of the Aspen Strategy Group. [18]

Baird sat on the board of the left-wing Mexican American Legal Defense and Education Fund (MALDEF) between 1998 and 2003. [19]

In 2016, Baird gave the maximum contribution to Hillary Clinton’s campaign for president. [20]