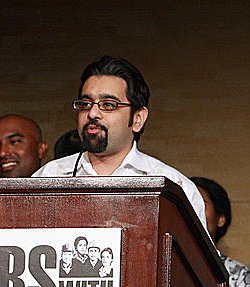 Saket Soni is a left-of-center community organizer responsible for organizing, and ultimately mobilizing, left-leaning constituencies on issues such as immigration and labor, having been profiled as the “architect of the next labor movement” by USA Today. [1] He specializes in mobilizing the aforementioned constituencies within the context of various national disasters, such as Hurricane Katrina. [2]

Soni has founded several left-leaning organizations which work together to execute his strategies, including New Orleans Workers’ Center for Racial Justice (NOWCRJ), Resilience Force, and the National Guestworker Alliance (NGA). [3] He is active in publishing his positions across a variety of outlets, and authored And Injustice For All: Workers’ Lives in the Reconstruction and Never Again: Lessons of the Gustav Evacuation. [4] His commentary reaches the audiences of National Public Radio, Time, the New York Times, Los Angeles Times, The Hill, The Nation, Latino Journal, Talking Points Memo, and CNN.com. [5]

Soni’s labor advocacy is motivated by his belief that climate change is caused by humans. In response to an October 2020 presidential debate, Soni took to Twitter to criticize the lack of climate change discussion and predicted that in one year from the debate, natural disasters will force “thousands of Americans out of their homes.” [7]

Saket Soni has spent the duration of his career as a community organizer, beginning with his time spent working with the Coalition of African, Arab, Asian, European, and Latino Immigrants of Illinois (CAAAELII). [8] The organization has since dissolved. [9] Soni’s time in Chicago served as a springboard from which to launch his career, and ultimately form several other organizations which work together to mobilize targeted left-leaning constituencies across issues such as immigration and labor. Organizations founded by Soni for such purposes include the New Orleans Workers’ Center for Racial Justice (NOWCRJ), Resilience Force, and the National Guestworker Alliance (NGA). [10]

The Coalition of African, Arab, Asian, European, and Latino Immigrants of Illinois (CAAAELII) is a Chicago-based community organization founded in 1998 to mobilize left-leaning constituencies in an effort to influence immigration issues. [11] Saket Soni first began his career as a community organizer at CAAAELII;[12] however, the organization has since suspended operations and formally dissolved. [13]

Soni first founded the community organizing group New Orleans Workers’ Center for Racial Justice (NOWCRJ). [15] In 2006, NOWCRJ was founded in the wake of Hurricane Katrina (which Soni claims was a “man-made disaster”) and serves the community organizer’s interests in post-disaster economies. [16] The Board of Directors at NOWCRJ is composed of the following members: John Cavanagh, Don Everard, Crystal Plati, Ted Quant, and Rosario Elizalde. [17]

NOWCRJ focuses its work in the following initiatives: legal and policy advocacy, Congress of Day Laborers, and Stand With Dignity (stylized STAND with Dignity). [18] The National Guestworker Alliance (NGA), another component of Soni’s network of organizations, is a project of NOWCRJ. [19]

Resilience Force is another component of left-wing community organizer Saket Soni’s network of organizations which mobilize left-leaning constituencies across a host of issue areas. [20] Like the New Orleans Workers’ Center for Racial Justice (NOWCRJ), Resilience Force supports his campaigns in post-disaster areas, and is a project of the National Guestworker Alliance (NGA), another component of Soni’s network. [21] The organization is operated by a staff of four, consisting of the following members: Jeff Pinzino, a left-wing fundraiser affiliated with the Illinois Coalition for Immigrant and Refugee Rights and Midwest Academy, which trains left-wing community organizers; the former Executive Director of the South Florida Federation of Labor (AFL-CIO) Cynthia S. Hernandez; Daniel Castellanos, who helped found the NGA; and Javiera Alarcon, formerly of the Stewart R. Mott Foundation, MoveOn.org, and the Institute for Policy Studies. [22]

Soni co-wrote an article in response to the COVID-19 pandemic that describes what he advocates for through Resilience Force. The article argues congress should institute a jobs program resembling the New Deal for COVID recovery workers. It states the program would cost over a trillion dollars and act as a permanent part of America’s infrastructure following COVID-19. The article goes on to state that it is needed to reduce America’s vulnerability to disasters and should prioritize equity standards for hiring ethnic minorities. Additionally, the article argues that there is a need for a more comprehensive disaster response infrastructure due to human-caused climate change. [23]

Saket Soni founded National Guestworker Alliance (NGA) in 2011 as part of a network of organizations seeking to mobilize left-leaning constituencies across a host of issue areas. [24] Resilience Force is a project of the NGA,[25] which itself is a project of the New Orleans Workers’ Center for Racial Justice (NOWCRJ), and organizes left-leaning constituencies in an effort to influence labor and immigration issues. [26]

The campaigns executed by NGA to mobilize left-leaning constituencies in these areas include the following: Beat The Blacklist (stylized #BeatTheBlacklist), Jamaican Worker Justice, McDonald’s Must Pay, Breaking Chains at Walmart, Justice At Hershey’s (stylized [email protected]’s), Trafficking In Tennessee (stylized Trafficking in TN), and Signal International. [27] NGA is listed as an ‘Allied Group’ of the largest federation of labor unions in the United States, the left-leaning AFL-CIO, and the organization explicitly labels these partners as “progressive organizations.” [28] NGA is a fiscally sponsored project of the left-leaning NEO Philanthropy,[29] meaning NGA outsources the organization’s finance and administration roles to NEO Philanthropy, and NEO Philanthropy in turn acts as an umbrella organization for NGA, accepting and administering funds on behalf of NGA. [30]

In March 2021, Soni was named as a defendant in a lawsuit against the Netflix documentary “Immigration Nation.” Soni was accused of having knowingly made false allegations in the documentary against Winterfell Construction for not paying its immigrant workers. Winterfell Construction’s Tommy Hamm, who filed the lawsuit, claims that he attempted to help the workers receive payment for their work, contradicting statements made in the documentary. As a result, Hamm stated that his company’s reputation and business has been ruined and has received death threats. [31]