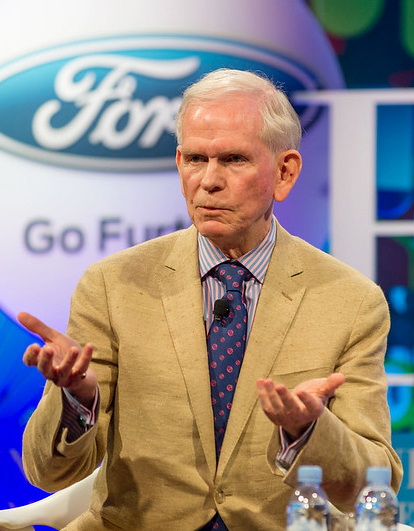 Jeremy Grantham is a British investor and philanthropist who is a major contributor to numerous left-wing organizations that work on environmental issues. He is the co-founder of the investment firm Grantham, Mayo, and van Otterloo.

He controls an endowment worth hundreds of millions of dollars through the Grantham Foundation for the Protection of the Environment and the Jeremy and Hannelore Grantham Environmental Trust. Those funds are used to fund various left-of-center groups and projects that work on environmentalist and climate change issues.

Despite his climate change and environmentalist stances, his investment firm remained heavily invested in oil and gas as of 2013. Grantham told The Guardian: “We need oil. If we took oil away tomorrow, civilization ends.” [1]

Jeremy Grantham was born in 1938 in Hertfordshire, England and was raised by his Quaker grandparents in Doncaster, England. [2] He received a degree in economics from the University of Sheffield in the early 1960s and a brief stint working for the oil company Shell, he received an MBA from Harvard Business School. [3]

Grantham began taking a concern in environmental issues after a vacation to the Amazon and Borneo in the 1990s. There he was struck by the deforestation that was rampant in both places. He began to express his views in quarterly newsletters published by his firm that warned about the depletion of resources and the devastation of the environment. He also founded the Grantham Foundation for the Protection of the Environment and began moving his own personal wealth to back environmentalist causes. [5]

Among the left-wing and environmentalist groups that Grantham has funded are the Sierra Club, the Nature Conservancy, 350.org, Greenpeace, and the World Wildlife Fund. Grantham has also funded left-wing groups focusing on environmental reporting such as Media Matters, the Center for Investigative Journalism, Grist, and National Public Radio.

In 2013, he had planned to get himself arrested to protest a pipeline. But he was advised that if he was arrested, it would cause difficulties with his green card and would give him serious problems while traveling. [7]

Grantham is a critic of modern capitalism. He believes that it leads to short-term thinking and that it puts the profits of corporations ahead of any other considerations. In addition, he believes that long-term issues can only be solved through heavy government regulations. He also describes himself as “to the left of Karl Marx” on income inequality. [9]

Grantham views the election of U.S. President Donald Trump as the “final flowering of corporatism.” He believes the tax cuts have been “lopsided” in benefiting the wealthy. He also believes the Trump administration has put more pressure on unions and rolling back environmental regulations. Finally, he argued that the U.S. withdrawal from the Paris Agreement made the U.S. a “rogue state.” [10]

He also believes there is a well-funded right-wing propaganda machine that is deeply embedded in American society. He has been funding left-wing media to try and counter it because they are “ignorant in comparison.” [11]