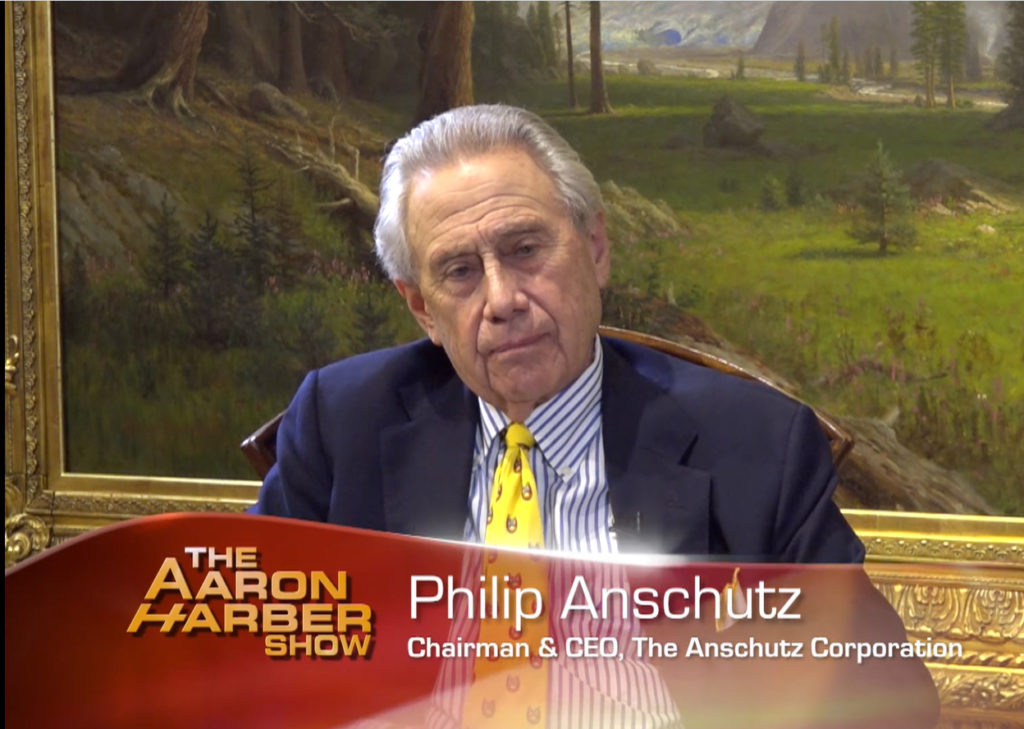 Philip F. Anschutz (born 1939) is a businessman and the president of The Anschutz Corporation, a holding company based in Denver, Colorado. Anschutz is a prominent donor to Republican politicians and a supporter of conservative advocacy causes, being perhaps best known for his ownership of the Washington Examiner and, from 2008 until its closure in 2018, the Weekly Standard.[1]

Philip Anschutz owns a number of businesses under the umbrella of his Anschutz Corporation.

Around 2000, Anschutz, who was a major owner of movie theatres through the Regal Entertainment Group, began to produce films.[5] In 2004, he told an audience at a Hillsdale College seminar: “My wife and I now have a number of grandchildren who are growing up surrounded by the products of this culture. So four or five years ago I decided to stop cursing the darkness—I had been complaining about movies and their content for years—and instead do something about it by getting into the film business.”[6]

Anschutz added that “our company, by the way, makes G and PG and, occasionally, very soft PG-13 movies. They are primarily family films—films that families can see together.  We expect them to be entertaining, but also to be life-affirming can carry moral messages.”[7]

In 2001, Anschutz acquired a majority stake in Walden Media.[8] Anschutz is reportedly more active in productions than most investors; Variety reported in 2004 that “one media mogul was taken aback” when Anschutz “tried to pitch him a film project, a task that should have been left to underlings.”[9] Producer Ken Wales told Christianity Today in 2007 that Anschutz personally insisted that director Michael Apted direct a film about 18th-sentury anti-slavery crusader William Wilberforce, which was released in 2006 as Amazing Grace.[10]

Walden Media’s largest project was a series adapting C.S. Lewis’s Chronicles of Narnia novels. Lewis’s stepson, Douglas Gresham, who was involved in the negotiations, told Variety that Lewis’s estate supported selling the film rights to Anschutz because he both had the money to fund the films and was a Christian, as Lewis had been. Gresham said he admitted Anschutz “for bringing Christianity into the mainstream of everyday life as something that’s quite acceptable and normal.”[11]

The first Narnia film, The Lion, The Witch, and the Wardrobe, earned $745 million in ticket sales when released in 2005. The second and third films, Prince Caspian and The Voyage of The Dawn Treader, had dwindling sales, and the series ended with the remaining four films unmade.[12]

In 2010, Walden Media co-produced Waiting for ‘Superman,’ a documentary about the problems of public schools produced by Participant Media, backed by Jeff Skoll.  Promotion for this documentary was paid for by grants from the Gates, Ford, and Broad Foundations.[13]

In 2004 Anschutz purchased Journal Newspapers, a chain of newspapers based in the suburbs of Washington, D.C. He used the purchase as a basis for forming the Clarity Media Group, headed by former Denver Post publisher Ryan McKibben.[14]

In 2009, Clarity Media purchased the political magazine The Weekly Standard from News Corporation. In 2018, Clarity Media closed the magazine, with Ryan McKibben saying “double-digit declines” in subscriptions to the magazine “in all but one year since 2013” made the magazine no longer financially viable.[21]

In 2011, Anschutz purchased the historic Broadmoor Hotel, a resort property in Colorado Springs. Forbes in 2016 reported that he had spent $175 million upgrading the property. Anschutz told Forbes that he first visited the Broadmoor when he was five.[22]

He said that to ensure his intentions for the hotel would be honored, the Broadmoor would be controlled by a hundred-year trust, with future generations of trustees committed to upholding the hotel’s “four pillars” of history, tradition, service, and excellence. He said that “we’ve done everything we can” to ensure preservation of the Broadmoor to the next century.”[23]