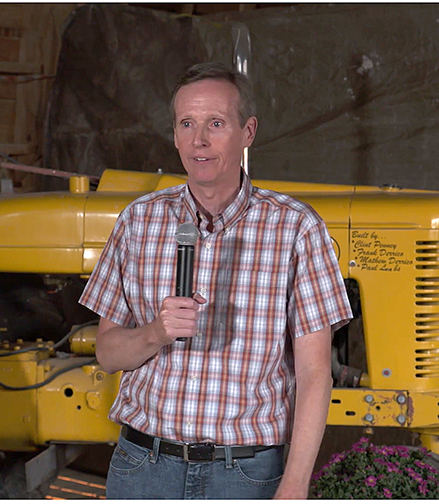 Michael “Mike” McCabe is a Democratic Party activist and the former founding executive director of the left-leaning Wisconsin Democracy Campaign, a position he served in for fifteen years. McCabe now serves as the founder and director of Blue Jean Nation, a platform he founded in 2015 that has allowed him to simultaneously launch a campaign as a progressive Democrat for Wisconsin Governor in 2018. McCabe lost his bid for the Wisconsin Democratic gubernatorial primary on August 14, 2018.[1]

McCabe claims that Blue Jean Nation was inspired by Blue Jeans in High Places: The Coming Makeover of American Politics, a book he authored in 2015.

McCabe was born in Stoughton, Wisconsin in 1960 and initially lived in Evansville. However, most of his childhood was spent on a 200 plus acre farm in Curtiss, Wisconsin.[2] He spends an entire chapter in his book recounting his experience in Clark County[3] and made his announcement speech for governor at the farm in Curtiss where he grew up.[4]

Prior to establishing the Wisconsin Democracy Campaign, McCabe held several policy positions. Among other positions, he worked for six years as communications director and legislative liaison for the Madison school district, as a newspaper reporter and legislative aide for three Republican members of the Wisconsin State Assembly, and as a Peace Corps volunteer in the West African nation of Mali.[5] In the early 1980s, he ran a statewide civic education program for the Taxpayers Alliance.[6]

McCabe has previously run for public office as a Democrat, running in a Democratic state Assembly primary in 1998. He lost to now- U.S. Representative Mark Pocan (D-Wisconsin).[7]

In 1995 McCabe helped form the Wisconsin Democracy Campaign, which claims to specialize in tracking the flow of campaign donations in state elections.[8] Beginning as a staffer, he took over as director in 1999.[9] Under McCabe’s leadership, the Campaign advocated for more public financing of political campaigns and additional limits on campaign speech.[10] McCabe was viewed as having very little appetite for compromise, with one observer noting that when approaching campaign finance reforms, “Mike was more of that school of thought that if it wasn’t [all-or-nothing], reforms wouldn’t have a chance to reform again.”[11] McCabe’s philosophy often placed the Wisconsin Democracy Campaign to the left of other recognized liberal Wisconsin advocacy groups such as Wisconsin Common Cause.[12]

Despite denouncing outside groups that impact legislation without disclosing donors, as executive director McCabe did not hesitate to accept funding from the Foundation to Promote Open Society associated with liberal financier George Soros.[13] McCabe publicly defended accepting the grants from Soros’s group in an appearance before the Wisconsin Supreme Court in late 2009.[14] In addition, while often decrying the influence of lobbyists, McCabe himself served as a registered Wisconsin lobbyist on behalf of the Democracy Campaign as recently as the 2013-2014 legislative session.[15]

While serving as director of the “nonpartisan” organization, McCabe was referenced four times in a 2013 speech by Sen. Bernie Sanders (I-Vermont) at the Fighting Bob Fest!, an annual gathering of Wisconsin progressives that celebrate the legacy of Wisconsin progressive stalwart Bob La Follette.[16] Sanders specifically referenced McCabe’s comments regarding “La Follette’s agenda and the importance of developing a grassroots agenda.” Sanders’ proclamation that “Mike is Quite Right!” now serves as a rallying cry for his gubernatorial campaign.

After leaving the Democracy Campaign, McCabe started Blue Jean Nation, a 501(c)(3) organization that claims to “house the politically homeless.”[17] Despite claiming in its creed “both major political parties are failing America,” under McCabe’s leadership Blue Jean Nation has a decidedly Democratic lean.[18] Pursuant to the Blue Jean Nation’s Common Creed, there is not a desire for three parties, but “at least one that truly works for the people.”[19] In order to carry out that mission, McCabe has selected a number of Democrats to serve on the Blue Jean Nation’s board of directors. In fact, five out of eight board members are former Democratic candidates for office.[20]

“Book of the Nation”

The “Book of the Nation” is McCabe’s 2015 book Blue Jeans in High Places: The Coming Makeover of American Politics. [21] While McCabe does reserve some judgment for Democrats, it is clear his real aim is to discredit Republicans while encouraging Democrats. In one of the oft-quoted lines from his book, he notes “[w]e have one party that is scary and another that is scared.”[22]

McCabe claimed that the idea to run for Wisconsin Governor wasn’t his, but that he was instead popularly “drafted.”[24] As proof, he cited a letter from Wisconsin activists—Wisconsinites Unite to Draft Mike McCabe for Governor—which includes numerous teachers, professors, public employees, and even a member of the Green Bay chapter of Black Lives United.[25]

Despite McCabe claiming to have never been a member of a political party, he declared his candidacy for Wisconsin Governor as a Democrat in Fall 2017. This prompted a public fight with the Democratic Party of Wisconsin, which insisted that membership lists would only be released to candidates that are active party members.[26] McCabe has refused to pay the minimal $25 fee to join the party, instead relying on his filing of a Declaration of Candidacy as proof of his party membership.[27] McCabe’s campaign manager used the public spat to compare McCabe’s candidacy to that of Bernie Sanders’, noting “DPW is making the same mistake the DNC made in 2016. They apparently haven’t learned a thing from what just happened last year.”

While McCabe emphasizes the theme of principle over party, noting along the way his commitment to not accept any campaign contribution over $200, to not live in the Governor’s residence if elected, and to take a salary one dollar less than the average Wisconsin salary, his platform includes several recognizable progressive policy positions. Among other things, he emphasizes “geyser economics” whereby “prosperity gushes up, it does not trickle down,” substantially boosting the minimum wage, promising “BadgerCare should be there for all Badgers,” setting a goal for Wisconsin to be “the first in the nation to be fully powered by renewable energy,” ending “taxpayer-subsidized private schooling” (otherwise known as Wisconsin’s Parental School Choice program), and committing to spending more on the state’s university system than its prison system.[28]

Wisconsin’s largest publication has opined that McCabe “is staking out turf on the left end of the Democratic spectrum, campaigning for ‘a living wage for every worker, health care for all, debt-free education and job training, and high-speed internet to every doorstep.’”[29]

Despite McCabe’s emphasis on running a “people powered” campaign, his efforts have often looked like that of most other gubernatorial campaigns. His claim to not raise more than $200 from individual donors is somewhat misleading – the limit only applies to single donations.[30]  McCabe’s campaign will still accept a total of $1,000 from a campaign donor.[31] In 2017, almost 40% of his campaign events were not open to the public and media, with 50 campaign stops held behind closed doors.[32] In order to fund the campaign, McCabe has already loaned it $25,000.[33]