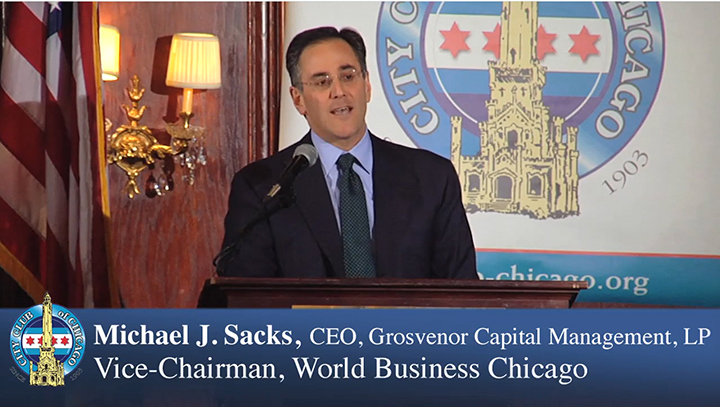 Michael Sacks is a hedge fund manager and major Democratic donor living in Chicago. He is married to Cari, a philanthropist. Sacks and his wife are major players in Chicago politics, supporting leading Democrats in the city with donations. They were major supporters of former Mayor Rahm Emanuel (D) and were influential in his administration. [1] Sacks was a major supporter of former President Barack Obama. He his wife were major super bundlers to his campaigns. [2]

In 2013, Sacks and his wife were accused of steering PAC contributions to then-Illinois Governor Pat Quinn (D) in exchange for Quinn steering state pension funds to Sacks’s company. [3] In 2015, Sacks was accused of using his political connections with Emanuel to secure management contracts for Chicago city teachers’ pensions. [4] In 2015, Sacks’s daughter was chosen to be a White House intern by President Barack Obama after Sacks and his wife donated nearly $700,000 to the Obama Foundation. [5]

Sacks is also a part owner of the Chicago Sun-Times newspaper. [6]

Sacks got his law degree and MBA from Northwestern University in 1988. [7]

He joined Grosvenor Capital Management in 1990, eventually becoming its CEO and chairman. [8]

Sacks and his wife Cari are major Democratic donors, donating to candidates both nationally and in Illinois. In the 2012 presidential campaign, the Sacks raised more than $200,000 for President Barack Obama’s reelection. [9] They even hosted a fundraiser for the Obama campaign at their Chicago apartment. [10]

During the Emanuel administration, Sacks was a major advisor to Emanuel. Sacks was named vice chairman of World Business Chicago, which is the economic development arm of the city of Chicago that is loaded with dozens of top business leaders. [14]

Also throughout Emanuel’s tenure as mayor of Chicago, Emanuel reported taking transportation, sports tickets, or meals as gifts from Sacks on his annual disclosure form. [15]

In 2013, the Illinois teachers’ pension system received permission to transfer their pension fund to the control of Grosvenor Capital Management. [17]

The decision was made after then-Illinois Governor Pat Quinn (D) received $70,000 from Personal PAC, a pro-abortion super PAC that was run at the time by David’s wife, Cari. [18]

In the nine years before Quinn became governor, the Sacks gave $157,200 to Personal PAC. In the six years Quinn was in office, the Sacks gave $833,000 to the PAC and its independent expenditure arm. [19]

Both the state of Illinois and federal law have a ban on using campaign contributions to influence how governments manage their money. The laws also have a ban on using PACs as conduits to funnel the money. [20] Cari Sacks denied a media report that the contributions were used to steer contracts to her husband’s company. She said that she and her husband had contributed to Personal PAC since 1990 and that she only increased her contributions after the Citizens United Supreme Court decision. [21]

In 2015, then-Mayor Rahm Emanuel (D) proposed shifting the pension fund for Chicago city teachers into a state-run fund. Emanuel sold the proposal as a way for the state to equitably fund the pension fund. Before the merger proposal, the city paid a larger share of the pension than other Illinois cities. [22]

The state pension fund was run by Sacks’s company Grosvenor Capital Management. Emails from Emanuel’s office released in May 2015 showed that Emanuel and Sacks exchanged more than 1,500 emails since 2011 and many of those emails were pension-related. [23]

The merger proposal drew criticism due to Sacks’s contributions to Emanuel. Some Chicago city officials asked for an investigation into whether or not the donations from Sacks violated federal laws against “pay to play.” [24]

In 2015, Sacks’s daughter, Rachel, received an internship at the Obama White House. The internships, which are seen as prestigious, are only awarded to 150 students. [25]

The internship was awarded after Sacks and his wife donated $666,000 to the Obama Foundation, which was building Obama’s presidential library after he left office. [26]

Sacks also sits on the board of the Obama Foundation. [27]