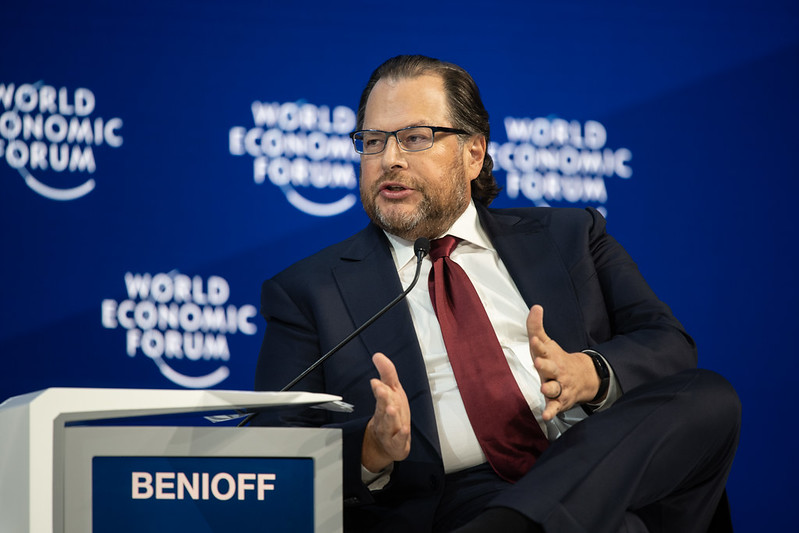 Born and raised in the San Francisco Bay area, Marc Benioff started programming applications as a teenager and developed videos games for the Atari game system in high school. After graduating from the University of Southern California, he went to work at Oracle Corporation for more than a decade, becoming the youngest vice president in the company’s history. [1]

In 1999, Benioff co-founded Salesforce.com, an enterprise cloud computing company that offers software suites designed to increase integrate sales, marketing, personnel, and information technology software for companies, non-profits, and government agencies. [2] Benioff’s innovation was to pioneer the software distribution by which corporate software purchasers could pay per-user, per-month fees for services that would be delivered to them immediately via the Internet that would become the dominant model for software use. [3]

Salesforce.com went public in 2004 and the stock has gained nearly 1,800 percent since then. Benioff retains a 4 percent stake in Salesforce.com and his net worth was estimated in 2020 to be $7.5 billion. [4]

Benioff holds a number of left-progressive political views, some of which he has carried out through his businesses. Benioff is a major donor to the Democratic Party and its candidates: He reportedly “bundled” approximately $500,000 to President Barack Obama’s re-election campaign and had contributed $300,000 to other Democratic candidates and party organizations as of 2014. [5]

In 2019, Benioff courted attention for asserting that “capitalism is dead” and calling for a new form of capitalism that rejects “Milton Friedman capitalism, that’s just about making money,” in favor of capitalism that focuses on “the social good” and “stakeholders instead of shareholders.” [6] He has called his business philosophy “a millennial view of the world. Millennials want meaning in work. They want to feel like they improve the state of the world.” [7]

Benioff has called for tech company executives to exercise greater control over the use of their products, and called Facebook “the new cigarettes,” advocating for its regulation by the government. [8] He has been vocal in advocating for government regulation of social media platforms to combat allegedly misleading content, saying that “A lot of these revelations [about use of social media platforms by foreign entities to influence U.S. elections] are surprising to them, that their technology was manipulated and used in this way. In the same way, we have to look at how these technologies are being used by everyone.” [9]

In 2019, at Benioff’s urging, Salesforce.com banned customers that sell a wide range of firearms to private citizens from using its software. [10]

Locally, Benioff supported San Francisco’s 2018 Proposition C, which levied higher taxes on businesses to raise funds for addressing homelessness, and says he was “shocked by the resistance” to the campaign among tech industry leaders. [11] Benioff gave more than $2 million to support passage of the law and got into widely publicized Twitter fight with Twitter CEO Jack Dorsey, who opposed the law. [12]

After then-Indiana Governor Michael Pence signed the Indiana Religious Freedom Restoration Act, Benioff announced that the company—then the largest technology employer in the state—would provide relocation packages to any Salesforce.com employee working in Indiana. He also pledged to reduce the company’s investments in Indiana, calling the law “brutal,” “unfair,” and “unjust” because it permitted certain religious objectors to refrain from participating in same-sex marriage ceremonies. The law was later amended. [13] Benioff also threatened to reduce business investment in Georgia if the state passed a similar law in 2016, and successfully lobbied the state’s Governor to veto it. [14]

At Salesforce.com, Benioff instituted a “1-1-1 model” of corporate philanthropy, whereby the company contributes one percent of its equity, employee hours, and product to community organizations. Benioff says that the model came out of his “discontent” at Oracle. [15]

Benioff and his wife, Lynne, have also given more than $66 million to programs to address homelessness in the Bay Area. That includes a $30 million gift to found the Benioff Homelessness and Housing Initiative at the University of California-San Francisco (UCSF), which conducts research on causes of homelessness and policies to address homelessness. [16] Benioff also gave $6.1 million to convert the Bristol Hotel, a 58-unit hotel in San Francisco’s Tenderloin District, into housing for the homeless. [17]

Benioff has supported left of center advocacy groups working on gun control and immigration issues. He gave $1 million to support March For Our Lives, a gun control rally held in Washington, D.C. on March 24, 2018 in the wake of a shooting at a high school in Parkland, Florida. [18] In 2015, Benioff gave the California Endowment $500,000 to provide legal representation and trauma counseling to unaccompanied minors in California who had migrated from Central America. [19] In 2018, he was criticized by liberal expansionist immigration activists after Salesforce.com signed a contract to provide software to the U.S. Customs and Border Protection agency. He responded by stating, “I think every company’s going to need to be able to have a structured conversation around humane use.” [20]

Benioff is also chairman of the Salesforce Foundation. [22] The foundation made about $1.8 million in largely small-dollar grants in 2017, mostly in employee-directed donations. [23]