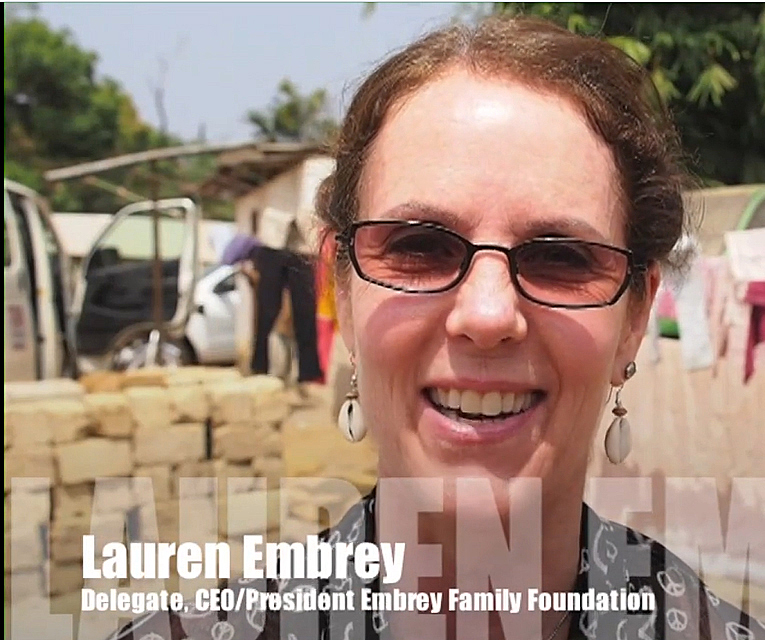 Lauren Embrey is a left-leaning advocacy philanthropist and the president of the Embrey Family Foundation. As of early 2020, she sits on the board of the liberal donor convening Democracy Alliance. [1]

Embrey has quoted the Bible to justify funding for Planned Parenthood and accused the news media of sexism in covering female political candidates. She is also an opponent of the Trump administration’s immigration policies.

In 2004, Lauren’s father, J. Lindsey Embrey, a wealthy Dallas real estate developer, established a family foundation. He died in 2005, and Lauren and her sister Gayle took over the foundation. Their first move in running the foundation was to establish the Embrey Human Rights Program at Southern Methodist University in 2006. The Embrey Family Foundation went on to give $1 million to the Dallas Women’s Foundation. [2]

In an op-ed from 2016, Lauren Embrey wrote about growing up. “I was living in Texas, which culturally seemed to be denying the realities of the women’s movement.” She said she gradually began to see changes beginning in the 1990s. [3]

The family foundation has funded Planned Parenthood. Embrey even quoted the Bible in 2015 to champion continued funding for the nation’s largest abortion provider: “The Proverbs tell us to speak for those who cannot speak for themselves. This is why The Embrey Family Foundation began funding Planned Parenthood in 2009.” [4]

The foundation also partnered with the Women’s Media Center and the Women’s Campaign Fund to start the “Name It, Change It” campaign as a rapid response system to call out alleged sexism in political campaigns. The “Name It, Change It” campaign started in 2016 when Hillary Clinton was the Democratic presidential nominee. In an op-ed Laruen Embrey complained “sexist news was creating barriers to women’s leadership in government.” [5]

Embrey signed onto a letter from a group forming Grantmakers Concerned with Immigrants and Refugees to oppose the Trump administration’s enforcement of immigration laws. [6]

Embrey sits on the boards of the AT&T Performing Arts Center, the Dallas Holocaust Museum, the Dallas Theater Center, TACA, and The Letot Center Foundation Board in Dallas; the Texas Futures Project in Austin; and the Women’s Media Center. [7]

She formerly sat on the boards of the Equal Rights Amendment Coalition and PEN America in New York City. [8]

Embrey is also a member of the Clinton Global Initiative, the Women Donors Network, Women Moving Millions, the Threshold Foundation, and Synergos Institute’s Global Philanthropist Circle. [10] As of early 2020, she sits on the board of the liberal donor convening Democracy Alliance. [11]

Embrey produced U.S. premiere of Truth in Translation in 2007 at Southern Methodist University. She was also the executive producer for Playground, a documentary film on commercial sexual exploitation of children in America. She further produced a documentary on The Apollo Theater in New York. Embrey has worked with Chicken and Egg Pictures, Impact Partners, and the Sundance Institute on film production. Embrey has also been involved with the Global Arts Corps. [12]

She also works with iDeal Partners Film Fund, based in New York, and has been an actress and producer at the Theatre Quorum in Dallas. [13]