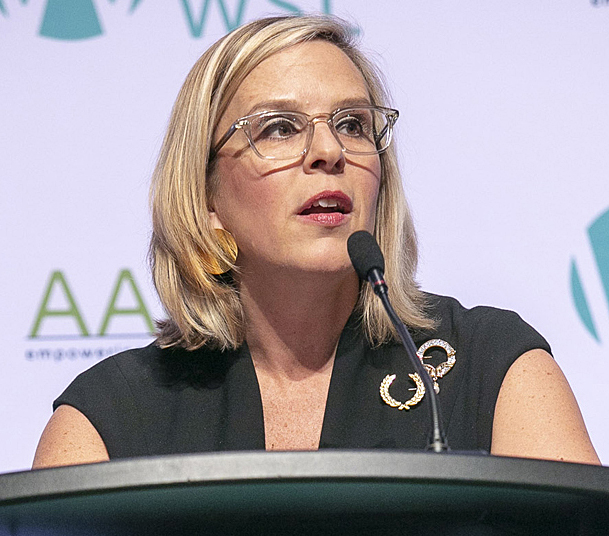 Kimberly Churches is an academic and activist who works as chief executive officer of the American Association of University Women (AAUW), a left-of-center advocacy group. Prior to joining AAUW, she worked for the Brookings Institution, a center-left think tank.

Kimberly Churches had a career in academia and think tanks before taking over the American Association of University Women (AAUW) in June 2017. [1] Before taking charge of AAUW, Churches was the managing director at the Brookings Institution, a center-left public policy think tank. During her career in academia, she held jobs such as the associate vice chancellor at the University of Denver and director of development at the University of North Florida. She also previously worked as a division director for the American Heart Association. [2]

Churches is also the chair of the board for Build Metro D.C., an organization that focuses on education and entrepreneurship in underserved communities in the greater Washington, D.C. She is on the board of the Virginia Center for the Literary Arts, and a member of the International Women’s Forum, which represents women leaders across 33 countries. [3]

Churches advocates teaching more about women’s history to pre-K through high school students, saying, “Very frequently when our P-12 schools are teaching American history it becomes all about the founding fathers, and you don’t see replicated photos of the women who helped to pave the way.” [4]

During her time in a fundraising role, she had to defend the think tank against an investigation by the New York Times. The newspaper obtained thousands of pages of internal memos and confidential correspondence between Brookings and large corporate donors JPMorgan Chase, K.K.R, Microsoft, and Hitachi. [6]

The Times reported documents “show that financial support often came with assurances from Brookings that it would provide ‘donation benefits,’ including setting up events featuring corporate executives with government officials…” The paper further reported in the 2016 story that the Brookings budget doubled to $100 million over the last 10 years. [7]

Churches told the Times, “Helping a corporation’s for-profit agenda is not in any way our agenda.” However, Churches said some of the correspondence with donors “could be misconstrued” by some to read like a fee-for-service agreement, the Times reported. [8]

AAUW research alleged that almost half of students in grades 7-12 experienced “some form of sexual harassment,” usually verbal, during the past year. She warned schools are “vastly underestimating” the problem. [9]

Churches promoted the claim, writing in Fortune: “If left unchecked, harassment is a learned behavior that continues into adulthood. When our students attend a school where harassment occurs and isn’t addressed, this establishes a norm … That is reflected in the climate we see on college campuses and in workplaces—public, private, and nonprofit—across the country.” [10]

In a Time essay, Churches wrote employers should address the matter for their own bottom line. “If women are faced with sexism and harassing behavior in the workplace, that’s taking away time they could be using towards the organization’s ROI (return on investment),” she wrote, later adding, “This is a cultural problem that when the next generations come up, they’re going to lose certain employee pipelines if they don’t work on that culture problem.” [11]

Churches touts the AAUW’s WorkSmart program to educate women about negotiating better salaries by learning what the market will bear based on their experience, and what value they would offer to an organization. [12]

Cities partnering with the program include Boston; Tempe, Arizona; the District of Columbia; San Francisco; and Long Beach, California. Churches said the goal is to train 10 million women nationally by 2022 to negotiate better salaries. [13]