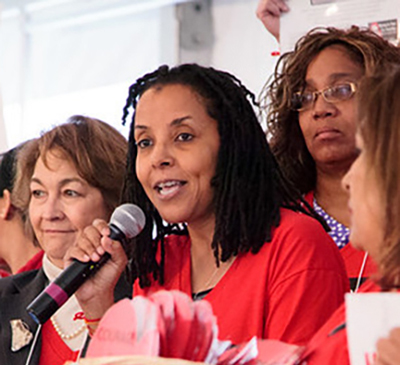 Kica Matos is the vice president of initiatives at the left-of-center Vera Institute of Justice, an organization originally created to promote bail reform that has since shifted much of its focus to advocating for expansionist immigration policies. [1]

As vice president of initiatives at the Vera Institute of Justice, Matos has been a national advocate for expanding immigration to the United States. [2]

Matos referred to the 2020 election as “a historic election threatened by efforts to disenfranchise voters.” Matos also claimed that the 2020 election was an election influenced by “the systemic racism of its institutions, including the American immigration system.” Matos has criticized the United States immigration system for not providing free legal services for the tens of thousands of asylum seekers and illegal immigrants who are subject to deportation. [4] Matos has called upon city and state governments to provide free legal services for illegal immigrants and for legal immigrants who are subject to deportation for committing crimes while in the United States. [5] Matos stated that such funding is necessary to provide a “powerful counter-narrative to the federal government’s relentless anti-immigrant policies and dangerous, divisive rhetoric.” [6]

Before joining the Vera Institute of Justice, Matos was the director of immigration rights and racial justice at the Center for Community Change, a left-of-center criminal justice and immigration policy organization. While working at the Center for Community Change, Matos coordinated the formation of the Fair Immigration Reform Movement, [7] the largest network of far-left and left-of-center organizations committed to increasing immigration to the United States. [8]

In 2013, Matos delivered a speech in Washington, D.C. in which she said that “our nation’s immigration policy is broken” and that any resolution requires granting legal status to the 11 million persons illegally present in the United States. Matos went on to state that the institutions that are meant to serve justice “conspire” to make undocumented immigrants and unemployed members of society more invisible. [9] Matos spoke at the steps of the Supreme Court while the Court heard oral arguments in McCutcheon v. FEC, a case involving speech rights. [10]

Matos provides speaking services, where she provides lectures on left-wing social policy, the future of democracy, and immigration. Matos charges a speaking fee between $7,500 and $10,000. [11]

On her website, Matos advertises her interview  on China Global Television Network, a television network that is owned and operated by China Central Television (CCTV), which is owned by the Chinese Communist Party. [12] In the interview, Matos called for comprehensive immigration policy change for the 11 million illegal immigrants in the United States and accused President Trump of “criminalizing and demonizing” immigrants, calling the Trump administration “xenophobic.” Matos also voiced support for the Black Lives Matter movement in the interview. [13]