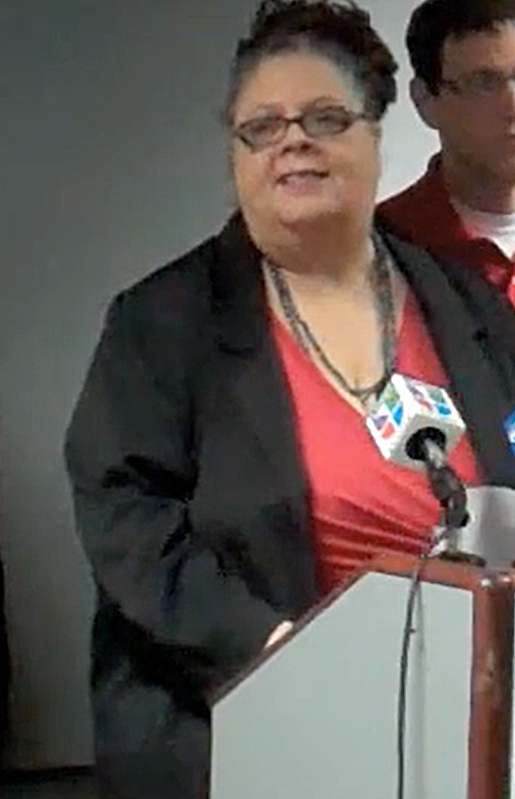 Karen G. J. Lewis (born Karen Jennings) was a teachers union activist based in Chicago, Illinois, who worked as president of the Chicago Teachers Union, an affiliate of the American Federation of Teachers, the second-largest teachers union in the United States. In 2012, she organized a teachers’ strike to protest education reform efforts by then-Chicago Mayor Rahm Emanuel (D). [1]

In February 2021, she died after having suffered from brain cancer.[2]

Lewis grew up in Hyde Park, Chicago. She attended Kenwood High School (now Kenwood Academy) and participated in black student walkouts in the late 1960s. She left high school in her junior year after Mount Holyoke College, a women’s college near Springfield, Massachusetts, offered her early admission. In 1972, she transferred to Dartmouth College in Hanover, New Hampshire. After graduating, she moved to Tulsa, Oklahoma, where she worked as a substitute teacher, a social worker, and various other jobs until 1980, when she left Tulsa to live in Barbados for a year. Shortly after returning to the United States, she moved to Chicago, where she enrolled in medical school at the University of Illinois at Chicago. She dropped out after two years, but pursued her interest in chemistry and eventually got a job as a chemistry teacher. [3]

Lewis was raised Lutheran, but converted to Judaism in the 1990s, when she said she was “looking for something spiritual” and was drawn to the “idea that you could question God.” [4]

Lewis married real estate inspector Arnold Glenn, whom she met while visiting family in Tulsa, Oklahoma, shortly after graduating from Dartmouth College. However, they were separated by the time she left for Barbados in 1980, and they divorced in 1984 after her return. In 2001, she remarried, this time to a fellow teacher at the Lane Tech College Prep High School in Chicago. [5]

Lewis taught at different Chicago schools for nearly two decades and was preparing to retire when she became involved with a radical-left faction of the Chicago Teachers Union called the Caucus of Rank-and-File Educators, or CORE, which opposed reforms to the education system which it perceived as reducing the influence of teachers and the teachers union. In 2010, CORE nominated Lewis to run for the union presidency against the incumbent. Lewis won, and took over as president in June 2010. [6]

During her tenure as president of the Chicago Teachers Union, and later as president emerita, Lewis worked to preserve benefits for union members and resist the adoption of additional teacher evaluation methods.

In September 2012, Lewis led a Chicago Teachers Union strike to oppose a proposed policy that would increase the effect of student test scores on teacher evaluations. The union also demanded increases to salaries, seniority pay, and health insurance coverage. The city eventually reached a deal with the union that included a smaller pay increase and most other benefit increases. The deal also kept the impact of test scores on evaluations lower than the city had pushed for. Lewis said the strike was “an opportunity for people across the nation to have their voices heard” and a move “in the right direction,” but also called the deal an “austerity contract” because the salary increase was smaller than the union had demanded. Labor relations professor Robert Bruno of the University of Illinois at Urbana-Champaign assessed the deal as a victory for the union, and said that “on every issue, the teachers got a more favorable outcome than the school system.” [7]

Lewis continued to attack then-mayor Rahm Emanuel (D) on education policy and other issues well after the strike. In March 2013, she labeled him a “racist” and “the murder mayor,” blaming him for “the murder rate in this city” and claiming that “he’s murdering schools, he’s murdering good jobs. He’s murdering housing.” [8]

In a June 2013 speech to the City Club of Chicago, a nonpartisan civic organization, Lewis alleged that “poverty and racism and inequality” hindered educational achievement in the Chicago public school system. She went on to attack “the effect [sic] that rich white people think they know what’s in the best interest of children of African Americans and Latinos.” She also accused “venture capitalists” of using “little black and brown children as stage props” at press conferences. At the same time, Lewis called for a progressive tax as an alternative to the state’s flat-rate income tax, as well as commuter and financial transfer taxes. Furthermore, she proposed raising property taxes, citing the fact that “a majority of the tax base for property taxes in Chicago, they’re mostly white.” Lewis further claimed that white property owners “don’t have a real interest in paying for the education of poor black and brown children” to justify her proposal. Lewis has insisted that “there is nothing radical” about her and that she only wants “every student in Chicago to get the best education we have to offer.” [9]

In 2014, Lewis considered running for mayor of Chicago and formed an exploratory committee. An early survey by the Chicago Tribune found that she led then-mayor Rahm Emanuel by four points, mirroring previous polls in which the public backed Lewis over Emanuel on education issues. In October 2014, however, she was diagnosed with a brain tumor and announced that she would not be running. Her condition also forced her to step down from her duties as teachers’ union president. [10]

In January 2015, Lewis unexpectedly issued a statement that she would be returning to work as union president after undergoing treatment for cancer. American Federation of Teachers president Randi Weingarten issued a statement welcoming Lewis back and thanking interim president Jesse Sharkey for stepping up in her absence. [11]

Lewis stepped down permanently in 2018 after suffering a stroke and other health problems. [12]

In October 2016, the teachers union nearly went on strike again, this time over pension funding. However, union leadership and city officials reached a last-minute deal which Lewis described as “not a perfect agreement” but “good.” [13] The union had previously staged a one-day walk-out in April over stalled contract negotiations. The city called the walk-out “an act of conspicuous lawlessness,” citing labor rules prohibiting teachers from striking before the month of May. Lewis said that the disruption was meant to put pressure on then-Illinois Governor Bruce Rauner (R), who was in the middle of a budget dispute with Democratic state legislators. [14]

Chicago teachers went on strike again in October 2019. The strike lasted for eleven days, partly because union leadership and city officials continued to fight over whether to extend the school year to include days missed even after reaching a deal. [15] Chicago officials agreed to most of the union’s conditions, including a raise for teachers, smaller class sizes, and more support staff such as nurses, social workers, and librarians. The concessions came at a cost of roughly $500 million to the city, which remains in significant debt ($838 million as of 2020.)[16]

Lewis, who remained president emerita of the union, wrote an open letter supporting the striking teachers and attacking Chicago Mayor Lori Lightfoot (D). Lewis claimed that Lightfoot had run on the union’s education platform but that she was now failing to meet her promises. Lewis stated that union members “have resolve and will not relent” in securing their interests and addressed them directly to suggest that they evaluate any potential deal on whether it builds the union’s power. [17]

Lewis resigned from the presidency of the Chicago Teachers Union in 2018 after receiving surgery to treat glioblastoma, a type of brain cancer. In February 2021, it was announced that she had died at the age of 67.[18]