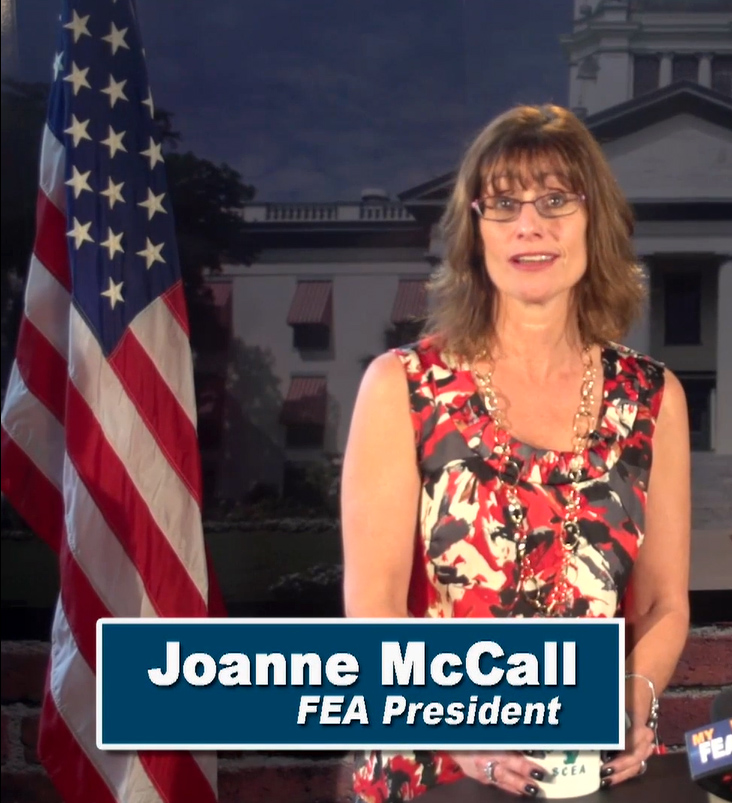 Before becoming involved in labor unionism, McCall worked as a school speech and language pathologist in Sumter County, Florida for 20 years. In 2015, McCall was elected to a three-year term as president of the Florida state teachers’ union, the Florida Education Association (FEA), after serving a term as the organization’s vice president. The FEA supports small class sizes, which require more teachers per school, and opposes market intervention in education through private school subsidy and charter school programs and private contracting for school services. [1][2] In 2018, McCaul lost her reelection bid to then-FEA vice president Fed Ingram. [3]

During her term, McCall received criticism from other union leaders for her management of the FEA and its electoral support of various candidates. In one such move, McCall decided to have FEA donate to former Florida Democratic gubernatorial candidate Gwen Graham without the joint endorsement of the United Teachers of Dade (UTD) and Broward Teachers Union (BTU). Similarly, in 2016, McCall’s FEA endorsed Jose Javier Rodriguez, the Democratic candidate for Florida State Senate District, and donated $150,000 to his campaign, even though Rodriguez was running against UTD’s endorsed candidate, Republican Miguel Diaz de la Portilla.

McCall was also criticized for her behavior in lobbying the Florida government. BTU president Anna Fusco took issue with how McCall’s FEA handled state-level lobbying in the wake of the Marjory Stoneman Douglas High School shooting in February 2018. In an interview with the Miami Herald, Fusco claimed that McCall and her staff encouraged other labor unions not to lobby the state government, instead attempting to control lobbying efforts on their own. Fusco claimed that McCall refused to “include her local leaders to execute the plan” and “called off” support “at the last minute,” leaving local union leaders “on the back burner.” [4]

In June 2019, shortly following her loss to Ingram, McCall returned to classroom work at Godby High School in Leon County, Florida. Soon after taking the job, McCall received an offer to become the executive director of the Pinellas Classroom Teachers Association, a local-level teachers’ union in Pinellas, Florida, and accepted. [5]

On July 3, 2020, the National Education Association (NEA), America’s largest labor union, posted a video on its YouTube channel featuring McCall asking the organization’s members to elect her as secretary-treasurer. [6]