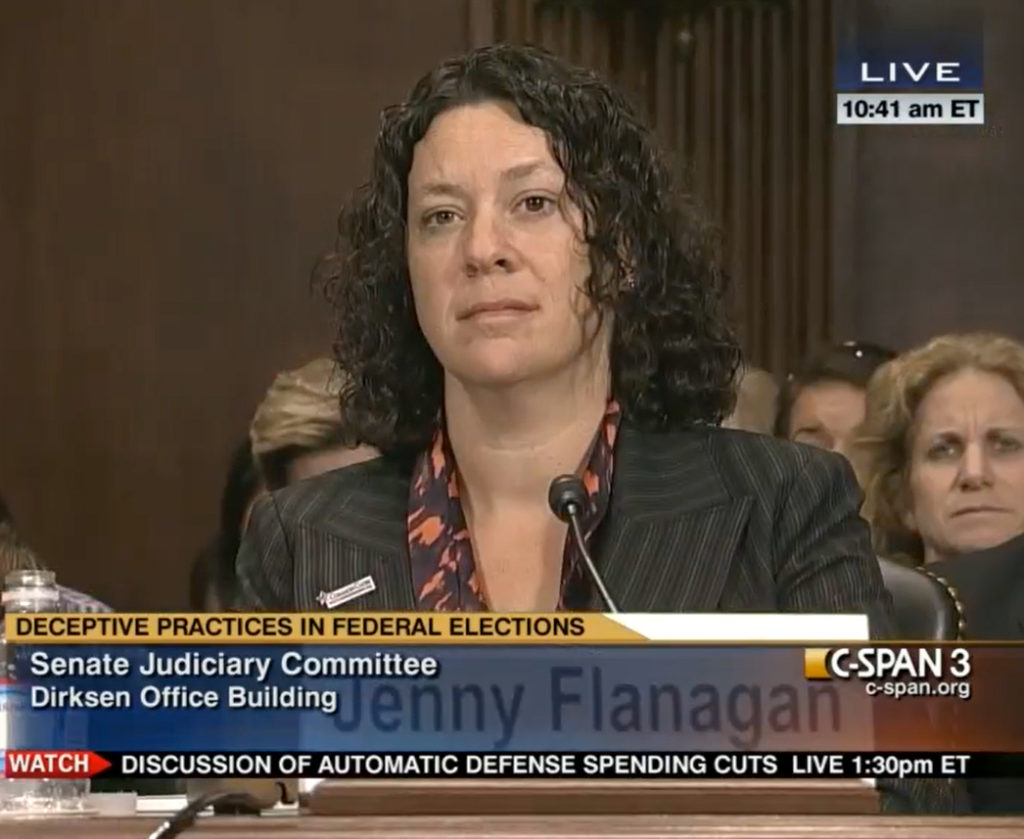 Jennifer “Jenny” Flanagan is a left-of-center activist who previously served as Deputy Secretary of State for Colorado, a position she held from January 2019 until approximately early March 2020. Flanagan specializes in election policy and is the former vice president of state operations in Colorado for Common Cause, a national left-of-center voter litigation and mobilization advocacy organization. Flanagan left the Colorado state government in 2020 and currently serves as the director of the Trusted Elections Fund, a funding collective supporting left-leaning election administration policies. Trusted Elections is managed by the New Venture Fund (part of the “dark money” network run by the for-profit consultancy Arabella Advisors). [1] [2]

Flanagan first joined Common Cause in 2004, working as associate state director for Colorado before becoming executive director of Common Cause Colorado. While leading Common Cause Colorado, Flanagan focused on passage of a Colorado ethics law and lobbying state and local officials to implement left-leaning voting practices in Colorado. Flanagan was also an early founder of the left-leaning election policy campaign Just Vote! Colorado Election Protection, a Colorado-based election monitoring program established in 2004. [4]

In 2011, Flanagan joined the national staff of Common Cause, first working as the director of voting and elections, and then as the vice president for state operations. Flanagan ran a large election advocacy effort for Common Cause in 2012 while working alongside other left-leaning groups such as Lawyers Committee, Pico (now known as Faith in Action), Black Youth Vote, and the Election Protection Coalition. [5]

In January of 2020, Flanagan announced her resignation from the Colorado Secretary of State’s office and left the job in early March of 2020 to join the new Trusted Elections Fund. [7]

The Trusted Elections Fund is a funding collaborative for center-left donors created as a response to reported interference in the 2016 elections by foreign entities. Trusted Elections is a project of the New Venture Fund, a 501(c)(3) nonprofit created and managed by Arabella Advisors, a Washington, DC-based for-profit consultancy that works with major left-of-center foundations and donors. Trusted Elections has announced planned investments toward what it perceived as the greatest risks in the 2020 election, including foreign hacks of voting machines, disputed results, election day violence, and interruptions to election day that could be blamed on the 2020 Coronavirus Pandemic. In addition to Flanagan’s role as the director, Trusted Elections also has a steering committee led by left-leaning foundations such as the Democracy Fund, Wellspring Philanthropic Fund, and the Spitzer Charitable Trust. [8]