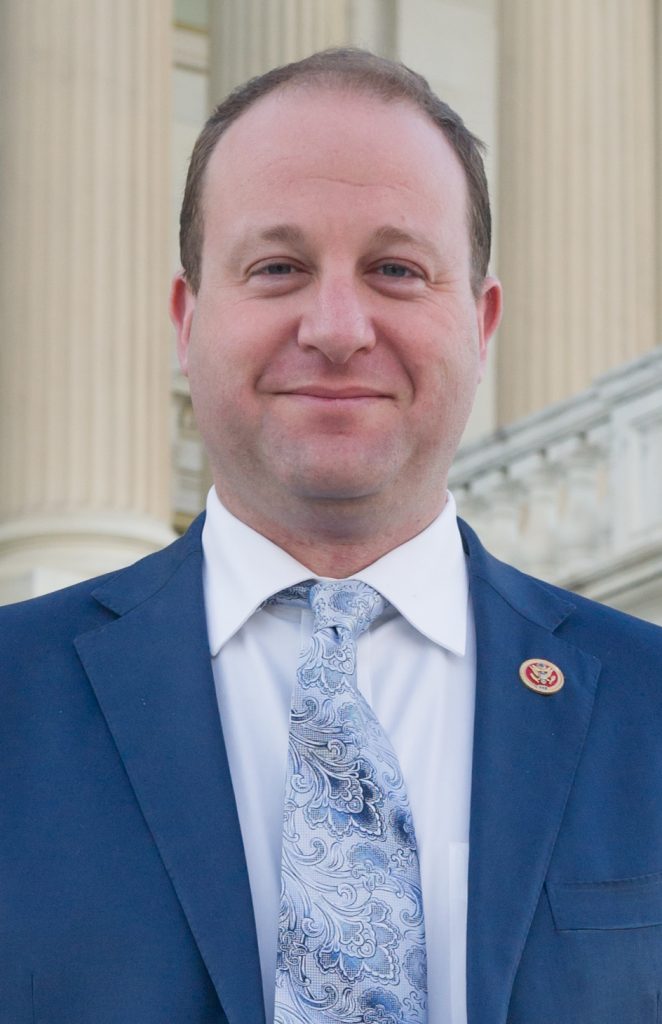 Jared Polis is a liberal politician, internet businessman, and political donor. From 2009 to 2018, he served as the Democratic U.S. Representative for Colorado’s 2nd district, which is dominated by the university town of Boulder. In the 2018 midterm election, Polis was elected governor of Colorado.

Polis earned a fortune through a series of internet businesses that he sold right before the dot-com crash of the late 1990s.[1] Polis used his personal fortune to buy an entrance into politics, in what Politico called a “clumsy display of naked ambition – uncouth even by Washington’s standards.”[2] In 2008, Polis spent nearly $6 million of his own money to win a seat in the House of Representatives.[3]

In Congress, Polis has been stridently left-wing, supporting government-controlled single-payer healthcare,[4] the 2009 economic stimulus,[5] and gun control;[6] voting 100 percent in alignment with Planned Parenthood[7] and the American Civil Liberties Union (ACLU). [8] He also supported President Obama’s $2 trillion tax increasing budget.[9] Polis has pushed environmentalist energy policies and said that he would expel 9 of 10 innocent students accused of sexual assault on campus just to get rid of the one student who was guilty: [10]

Jared Polis is a multi-millionaire politician who represented Colorado’s 2nd congressional district from 2009 to 2019. In June 2017, Polis announced his intent to run for governor of Colorado in 2018.[11] He won election as Colorado governor in the November 2018 election.

Polis has a domestic partner named Marlon Reis, and with two children, was the first ever openly gay parent elected to the United States Congress.[12]

Polis was born on May 12, 1975 in Boulder, Colorado, to self-described “flower children” parents Stephen Schutz and Susan Polis Schutz. He grew up in La Jolla, California, an affluent San Diego suburb. Polis started a Young Democrats Club at his exclusive private school, La Jolla Country Day. He graduated from high school at age 16 before earning a B.A. in Political Science from Princeton University in 1996. Polis credits his parents, who were active Vietnam War protesters, as his inspiration to enter politics.[13][14]

As a teenager, Polis spent a summer in Russia in 1992, the year after the collapse of the Soviet Union. During his time in Russia, he traded privatization vouchers on the Russian commodities exchange.[15] Polis allegedly made money off of selling these privization vouchers, which many considered a “botched, scandal-ridden [effort at mass] privatization, which wrecked Russia’s economy and led to the domination of the economy by ex-KGB oligarchs.”[16]

Polis then made a fortune at an early age during the dot-com boom of the late 1990s. In 1998 he sold an Internet service company, which he started from his dorm room, for $22 million. The following year 1999, he and his parents sold their electronic greeting card site BlueMountainArts.com for an estimated $780 million, netting Polis $160 million at the age of 24. Within two years the company that bought BlueMountainArts from Polis sold the site for $35 million and filed for bankruptcy.[17]

Polis has often used his fortune to buy political power.[21] In 2014, Politico Magazine described Polis’s “brash” use of his personal fortune to buy his entrance into politics as a “clumsy display of naked ambition – uncouth even by Washington’s standards.”[22]

Similarly, the Washington Post wrote that Polis was “willing to open his wallet” for a cause he believes in and that “often that cause is himself.”[23]

Politico Magazine quoted a highly placed Colorado Democrat who criticized Polis as “great at passing laws that don’t apply to him” in reference to his support for various Colorado ballot measures.[24]

In 2000, he bankrolled a state ballot initiative to require annual increases in state spending.[25] In 2006, he pushed through a referendum that banned lobbyists from giving gifts to elected officials and created the state’s independent ethics commission, and which has resulted in a myriad of legal challenges.[26]

In 2014, Polis was said to have spent a few million dollars backing controversial so-called “local control” ballot measures to regulate and ban natural gas extraction. The measures notably lined up with the priorities of the liberal wing of the Democratic Party like billionaire environmentalist Tom Steyer[27] but alienated centrist Democrats, most notably Colorado Gov. John Hickenlooper.[28]

In 2004, Polis was part of a small group of millionaires known as the “gang of four” who collectively poured $2.5 million and raised an additional $1 million for four outside spending 527 groups[30] that played a large part in winning control of Colorado’s state legislature for the Democratic Party.[31]

After his election to the U.S. Congress in 2008 through 2014, Polis gave $1,865,855 to the Democratic Congressional Campaign Committee (DCCC), making him the 9th biggest fundraiser in the House Democratic Caucus.[32]

In 2014, Polis’s chief of staff was quoted saying that Polis was, “either going to move up or move out,” in reference to his desire to be named chairman of the DCCC.[33] Subsequently, in February 2017, Polis was named a regional vice-chair.[34] Four months later, Polis announced his intention to seek the governorship of Colorado. [35]

One Democratic Colorado power player said the secret to Polis’s success is simple: “He’s bought every seat he’s ever had.” [36]

In 2000, Polis, an alumnus of expensive and exclusive private schools, “bought himself a seat on the state Board of Education at the age of 25”[37] spending nearly $1 million on state-wide political ads for an unpaid seat on the board.[38] He defeated his Republican opponent, who spent $11,000 to his $1 million, by just 90 votes in a recount.[39]

In 2008, Polis was accused of buying his congressional seat.[40] Polis spent nearly $6 million of his own money outspending his two opponents combined to win the Democratic primary,[41] the most expensive House primary race in the nation in 2008.[42][43]

Polis was a Democratic candidate for the Colorado gubernatorial election in 2018. He was one of five Democrats currently in the race. Polis immediately indicated that he planned to spend his own money on his gubernatorial candidacy[44] and gave his campaign $250,000 in donations, something election observers expected would only be the first payment in “a looming cash deluge.”[45] Polis won the 2018 election against Republican gubernatorial candidate Walker Stapleton.

Polis has been vocally supportive of government-controlled “single payer” health care since his initial congressional campaign, and he voted in favor of Obamacare.[46] In 2013, Polis told constituents and voters at the beginning of Obamacare’s open enrollment, “If you are currently insured and like the plan you have, you’ll likely be able to stick with your current plan,”[47] echoing a claim originally made by President Barack Obama that the left-leaning fact-checking website Politifact deemed the “Lie of the Year” in 2013.[48]

In 2009, Polis said he was proud to vote for the $787 billion economic stimulus package.”[49] In 2011, he introduced a bill to increase education spending by eliminating an $18.8 billion in defense spending, in part reducing the number of aircraft carriers and navy planes.[50] In 2012, Polis joined only 37 other members of the House in voting for a budget that mirrored President Obama’s recommendations and included nearly $2 trillion in tax increases.[51][52]

Polis supports gun control, notably politicizing a mass shooting at a Las Vegas concert by calling on Congress to enact tighter gun laws.[53] Polis wrote an editorial in 2015 calling for stricter gun laws, including restricting the 2nd Amendment constitutional protections for people on the FBI’s terrorism watch list.[54] The watch list has been criticized by civil libertarians and the left-of-center ACLU for a lack of due process.[55]

In a hearing on campus sexual assault in the House Committee on Education and the Workforce, Polis advocated for lowering the preponderance of the evidence standard, saying that if he were running a private university, he would expel a student “even if there is only a 20 or 30 percent chance” that student committed sexual assault.[56] He elaborated, “I mean, if there are 10 people that have been accused and, you know, under a reasonable likelihood standard maybe one or two did it, it seems better to get rid of all 10 people.”[57]

Polis’s statements “sparked controversy” and were widely criticized in a number of publications including the Denver Post[58] and the Washington Post,[59] and Polis was accused of supporting a “guilty until proven innocent” policy by civil rights groups[60].

Polis received a 2015 voting score of 92 percent from the American Federation of Labor and Congress of Industrial Organizations (AFL-CIO),[62] the nation’s largest union federation.[63]

Polis has a lifetime voting score of 100 percent from the Planned Parenthood Action Fund.[64]

Polis supports restrictions on political expenditures but has no problem availing himself of the law permitting candidates to spend without limit on their own campaigns, as evidenced by a $250,000 contribution he made to his gubernatorial campaign in June 2017.[66]

According to his 2011 personal financial disclosure, Polis had invested between $1 million and $5 million in the oil and gas industry.[67] In 2008 (before he was first elected), Polis was a managing director at Jove Partners,[68] which his opponents noted was invested in energy exploration, including oil and gas development.[69] However, Polis has campaigned on opposing gas exploration.[70]

Similarly, Polis’s Jove Partners was accused of war profiteering,[71] a stance that is antithetical to Polis’s position of “not one more dollar for Iraq.”[72]

Polis invested up to $35 million in Bridge International, a company that arranges surgeries abroad for American patients. Critics accused Polis of profiting off Obamacare because he would have reasonably expected the law to cause a spike in medical tourism. Polis also invested between $1 million and $5 million in sector funds for biotechnology, which realized a 25% increase due to Obamacare’s guaranteed 12-year patent protection for biotechnology company drugs.[73]