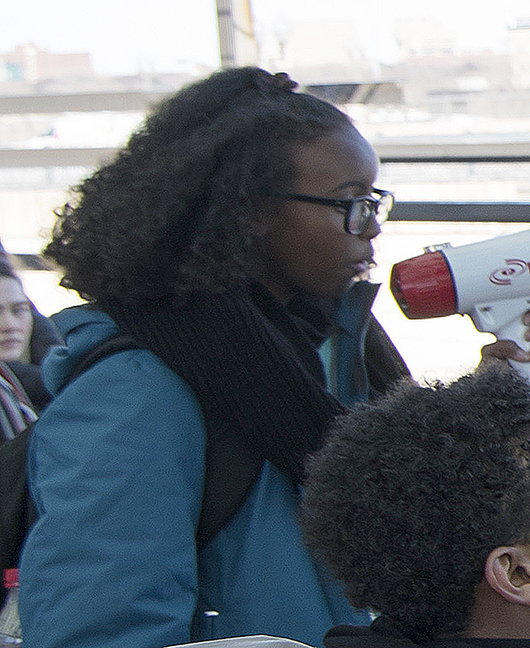 Isra Hirsi is an anti-capitalist climate change activist who is the daughter of left-wing U.S. Representative Ilhan Omar (D-MN). She was a co-founder and executive director of the Youth Climate Strike organization that now appears to be defunct.

In 2019 Hirsi cofounded the left-of-center environmental activist group Youth Climate Strike at the age of 16. The organization, which now appears to be defunct, was ostensibly led by children ages 12 to 16 and sought to emulate Swedish youth activist Greta Thunberg’s approach of “striking” from attending school in order to raise awareness about environmental issues. The group was very radical in its orientation and advocated for many policies that could be considered outside the mainstream, including the public ownership of the means of production. The group’s platform, ostensibly written by teenagers, includes points about “decolonization”, World Trade Organization treaties, the Global South, energy subsidy policies, and citations of Soviet Communist leader Vladimir Lenin. [1]

Hirsi is also identified as being a left-progressive political consultant, and as the former development director of the Gravel Institute, named after former U.S. Senator Mike Gravel (D-AK). [2] The organization advocates that the United States transition to a system of direct democracy and supports socialist-style property controls and the redistribution of wealth domestically and internationally. [3]

In 2019 Hirsi was named to the Fortune 40 under 40 list for her work as an environmentalist organizer due to her involvement with the Youth Climate Strike. [4] In 2019 she was also awarded the Brower Youth Award, presented by the left-of-center environmentalist group Earth Island Institute. During her acceptance speech she stated that her battle has been to force the climate strike movement to acknowledge privilege and whiteness and that her purpose is to “disrupt white spaces” and to introduce intersectionality. [5]  Hirsi has written about feeling “tokenized” and out of place because everyone else in her high school environmental club was white and stated that the lack of people who looked like her at the Washington, D.C., climate strike demonstrated that there is a need for “drastic change toward diversity” before it can “be intersectional and effective.” [6] She echoed similar points during her acceptance speech for the Voice of the Future Award at the Power Women Summit in 2019. [7]

Hirsi has also written that it is necessary for children to strike because adults do not take the climate issues seriously enough. She also compares the Green New Deal to the New Deal under FDR and claims that even though both were controversial, the New Deal was beneficial to American development. [8]

Hirsi was named to the 2021 Muslim Women to Watch List by the online publication MuslimGirl.com. [9]

Hirsi is an avowed anti-capitalist, stating so in her Twitter biography, which includes the Soviet hammer-and-sickle emblem as of mid-May 2021. [10]  Under her leadership tenure, Youth Climate Strike issued explicitly socialist demands, including the government takeover of privately owned land that is considered unproductive, the public seizure of livestock, “social ownership” of energy production that is managed by artificial intelligence, and government ownership of the means of production in general. [11]