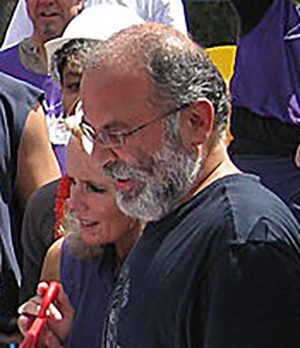 Hassan Jaber is the president and chief executive officer of the Arab Community Center for Economic & Social Services (ACCESS), a Detroit-based organization providing social services to Muslim communities in Detroit and across the United States.

Jaber immigrated to the United States from Lebanon in 1977 and has led ACCESS since at least the late 1990s. During his tenure at ACCESS, the organization has grown from a small local nonprofit to one with a national reach, 120 programs, and three national projects that include the Arab American National Museum, Center for Arab-American Philanthropy, and National Network for Arab American Communities. [1]

Jaber is a member of many local and national boards including an appointment by the Obama administration as a member of the National Advisory Committee on Racial, Ethnic, and Other Populations for the U.S. Census Bureau, a 32 person committee which advises the Census Bureau on “topics such as housing, children, youth, poverty, privacy, race and ethnicity, as well as lesbian, gay, bisexual, transgender and other populations.” [2]

He is connected to a number of organizations, including the Census Bureau, the United Way for Southeastern Michigan, the Henry Ford Hospital Network, Detroit Zoological Society, New Detroit, the Arab American Chamber of Commerce, and the 2020 Michigan Nonprofit Complete Count Committee. [3]