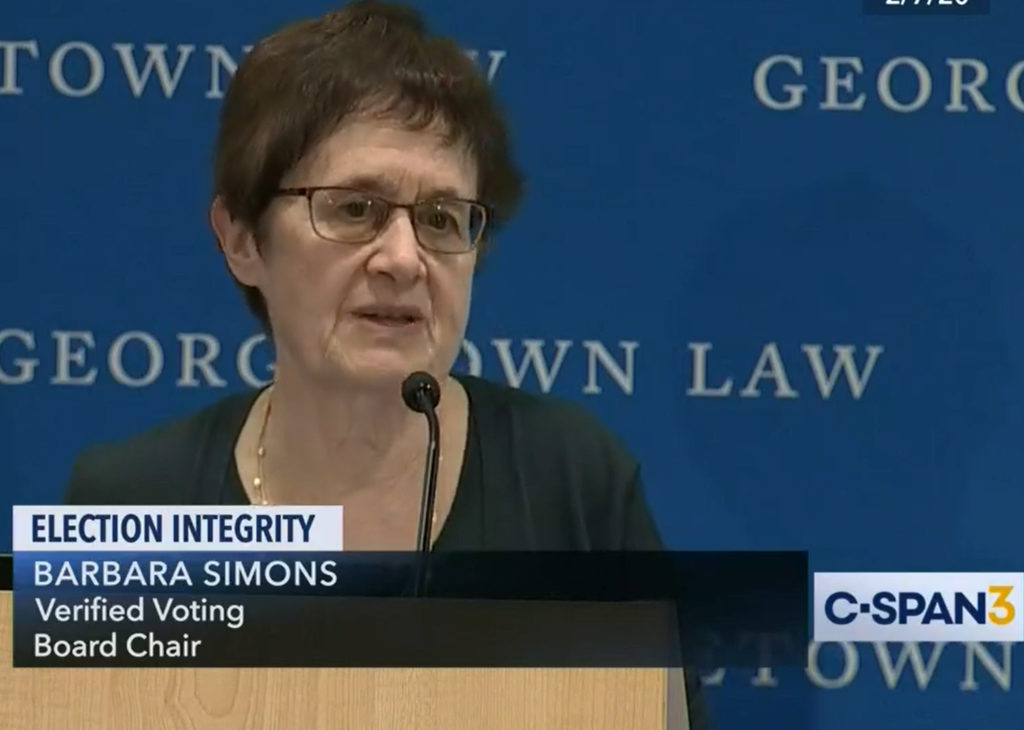 Barbara Simons is a computer scientist who serves on the board of Verified Voting, a nonprofit that advocates against electronic voting. Simons is an outspoken supporter of paper ballots, serving on the Board of Advisors to the United States Election Assistance Commission. In addition to her work on election administration, Simons is affiliated with several left-of-center organizations, including Democracy Alliance and the League of Women Voters.

Simons attended the University of California, Berkeley where she completed a doctoral degree in computer science in 1981. [1] In 2005, Simons was named the Berkeley College of Engineering Distinguished Alumna. [2] Simons spent most of her career as a research staff member at IBM’s Almaden Research Center. [3] Simons holds several patents and received an IBM Research Division Award for her work on clock synchronization. [4] In 1994, Simons was selected as one of the “Top 100 Women in Computing” by Open Computing. [5]

Simons turned to voting reform in 1999 when she served on then-President Bill Clinton’s Export Council Subcommittee on Encryption and National Workshop on Internet Voting. [6] Simons argued that internet voting was “very dangerous,” and following the push for internet voting after the 2000 presidential election, became an outspoken advocate against electronic voting machines, arguing that the United States should maintain a paper ballot system for elections to be secure. [7] Simons co-authored a report in 2004 to the Department of Defense which led to the cancellation of the department’s internet voting project (SERVE) due to concerns about vote security. [8] In 2008, Simons was appointed to the Board of Advisors to the United States Election Assistance Commission, where she continues to serve as a staff member. [9] [10]

In 2003, Simons joined the inaugural board of Verified Voting, a California-based nonprofit comprised of scientists which advocates for non-electronic voting. [11] During her time with Verified Voting, Simons co-authored Broken Ballots: Will Your Vote Count? in 2012 to critique American voting systems as insecure and unreliable. [12] [13]

Simons is a long-time voting reform advocate, known for her opposition to electronic voting. Simons has argued for not only a universal paper ballot system, but also manual post-election ballot audits to check the accuracy of the computerized machines which count ballots. [14] Simons claims that voting machines may make mistakes, may have software problems, and may be hacked, arguing that manual counting of paper ballots is the safest way to vote. [15] Security concerns aside, Simons has argued that internet voting will not increase voter participation, and that firms are selling digital voting technology by misrepresenting its impact on participation. [16]

In 2016, following Hillary Clinton’s loss in the presidential election, a coalition of left-of-center activists and organizations pushed for a full audit and recount of votes in key battleground states, on the grounds that some votes may have been skewed by foreign hackers. [17]

Simons led the effort for the recount, alongside Democratic megadonor Amy Rao. [18] Rao and Simons organized the effort for the recount, with Simons arguing in a private call with Clinton presidential campaign chair John Podesta that a recount in key battleground states should be instituted, given the supposed susceptibility of widely-used voting machines to malfunctions, miscounts, and malware. [19] Simons dismissed the verification of the machines as accurate, claiming that the only companies which verify machine performance are those which profit from the use of the equipment. [20]

Podesta and the Clinton campaign rejected the effort for a recount because researchers could not prove that it would change the election results. [21] Simons’s effort to institute a recount created the coalition that eventually led to former Green Party presidential candidate Jill Stein’s filing of a failed suit in Pennsylvania federal court to allow computer scientists to inspect Pennsylvania’s voting machines. [22] [23]

Aside from organizing the effort for a recount, Simons herself contributed analysis to a report on potential election interference to be presented to congressional committee chairs and federal authorities. [24] Polling expert Nate Silver and several other election analysts dismissed the effort, claiming that swing state results in the 2016 presidential election presented no cause for concern regarding foreign manipulation of ballot totals. [25] Nonetheless, Simons has continued to argue that Russia attempted to influence the 2018 midterm election and will try to interfere with 2020 elections. [26]

Simons served as president of the Association for Computing Machinery (ACM) from 1998-200, in addition to founding and chairing the organization’s United States Public Policy Committee for ten years. [33] [34] As president of ACM, Simons oversaw over 100,000 educators, researchers, and professionals aimed at advancing the field of computer science and organizing special interest groups to respond to modern challenges in computer machinery. [35]