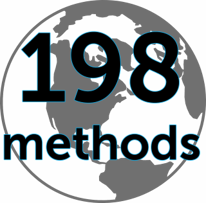 In August 2017, 198 Methods referred several organizations to constituents to give donations for emergency services after Hurricane Harvey made landfall in Texas. Its promotion was based on its assertion that “climate change is racist.” [1]

November 2017, 198 Methods published a report asserting that carbon emissions must be decreased by way of the Paris Agreement, wind energy, solar energy, and electric cars. It announced that it proposed to “delay, disrupt, and derail” gas pipeline construction. [2]

November 2019, 198 Methods opposed the nomination of David Bernhardt as Secretary of the Interior. [3]

On September 20, 2017, 198 Methods wrote a letter to Congress condemning several appointees and structural changes to the Federal Energy Regulatory Commission (FERC), as well as S1460, HR1900, and the Energy Modernization Act of 2015. [4]  The letter calls on Congress to conduct hearings in the FERC’s alleged “abuses of power” and to use findings to justify reforms to U.S. Code §717.

As part of 198 Methods’ opposition to FERC, it formed a campaign to oppose nominee James Danly from taking position as general counsel. The group encouraged constituents to tell elected officials “there’s no such thing as an acceptable Trump nominee!”[5]

In opposition to a coal power plant, 198 Methods supported and cited Swedish youth environmentalist activist Greta Thunberg to encourage breaking the law to risk arrest as part of their protest method. [6]

198 Methods created a donation campaign to oppose the construction of a natural gas power plant in Robeson County, North Carolina. [7] [8] The plant is considered the most cost-effective energy source for the area and brings in approximately $800 million in annual tax revenue. [9]

198 Methods called for a campaign to contact the Nuclear Regulatory Commission to prevent license renewal for Westinghouse to produce fuel rods for nuclear power plants. [10]

198 Methods called for Attorneys General throughout the country to file lawsuits against energy companies such as ExxonMobil, Chevron and Shell, accusing them of lying, and bearing liability for what they term a “climate crisis”. [12] [13]