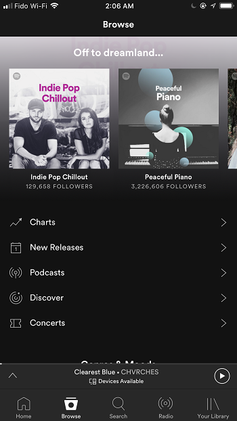 Screenshot of the Spotify for iOS app, currently displaying the Browse view. (link)

In May 2018, Spotify announced it would partner with various left-wing groups to combat “hate content” in its music streaming service. According to the firm’s policy, monitored “hate content” includes “that expressly and principally promotes, advocates, or incites hatred or violence against a group or individual based on characteristics” such as race, religion, or sexual orientation.[1]

On May 10, the company released a blog post on its website identifying the groups operating in partnership with Spotify to remove this content, all of which are left-wing advocacy organizations: the Southern Poverty Law Center, Anti-Defamation League, GLAAD, Color of Change, Showing Up for Racial Justice (SURJ), Muslim Advocates, and the European Union project International Network Against Cyber Hate.[2]