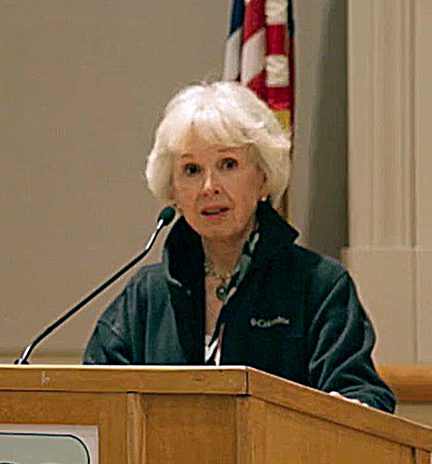 Sharon Tennison is the founder and president of Center for Citizen Initiatives, a pacifist organization that sponsors visits by Americans to Russia. She is an advocate of improved ties between the United States and Russia.

In addition to running the Center for Citizen Initiatives, she is a member of the American Committee for U.S.-Russia Accord, a left-progressive group that works for closer diplomatic ties between the United States and Russia. [1]

In 2021, Tennison was the largest single contributor to the political action committee formed by former Democratic presidential candidate and U.S. Rep. Tulsi Gabbard (D-HI). Like Tennison, Gabbard has advocated closer ties between the U.S. and Russia and a weaker U.S. presence in the world. [3]

Grassroots Diplomacy with the Soviet Union

Sharon Tennison is the founder and president of the Center for Citizen Initiatives, an organization that advocates for closer ties between the U.S. and Russia. The organization works to facilitate good will by sponsoring visits to Russia by American citizens. [4]

Tennison established the Center for Citizen Initiatives in 1983, at the height of the Cold War. The first visit consisted of 20 ordinary Americans who were sent to the Soviet Union to have conversations with Soviet citizens. The Soviet government made no effort to stop this. [5]

After the first visit, Tennison ultimately sponsored the visits of hundreds of ordinary Americans to the Soviet Union. In return, Tennison facilitated the visit of many Soviet citizens to the United States. The Christian Science Monitor credited this grassroots diplomacy as one of the factors that led to the thawing of relations between the U.S. and the Soviet Union and ultimately to the end of the Cold War. [6]

After the Cold War

After the collapse of the Soviet Union, Tennison sponsored a new project that sought to sponsor Russian entrepreneurs to visit the United States and learn from their American counterparts. Tennison was forced to shut the project down after funding dried up in the wake of the 2008 recession. [7]

In 2014, Russia annexed the Crimea region from Ukraine. The annexation led to significantly worse ties between Russia and the United States and other Western nations who saw the Russian annexation of Crimea as illegal. [8]

Tennison restarted her work in sponsoring visits of ordinary Americans to Russia. This time, unlike during the Cold War, she had a stronger network of contacts among the Russian people, but denies that she has official support from the Russian government. [9]

In 2016, Tennison and a fellow activist were detained by Russian authorities in Volgograd for violating the terms of their tourist visas when they held meetings about restarting visits between Russians and Americans. They were fined 2,000 rubles (roughly $26 at the time) each by a Volgograd court. The moves came amid what observers have called a crackdown by Russian authorities on Americans and other Westerners who were conducting research and other work using tourist visas. [10]

Tennison has developed a reputation for being an apologist for Russian President Vladimir Putin and his regime. She first met Putin in 1992 when Putin was working in the St. Petersburg mayor’s office. [11]

Tennison has blamed the Russian annexation of Crimea and other Russian aggressions on NATO expansion. [12] Tennison also credits Putin with turning around a “country flat on its belly” and has criticized the “demonization” of Putin and Russia by Western media. [13]

After Russia invaded Ukraine in 2022, Tennison blamed NATO expansion for the invasion. She lamented that NATO was on Russia’s borders in Ukraine, though Ukraine has never been a NATO member. [14]

In 2021, Tennison was the largest donor to the PAC run by former Democratic presidential candidate Tulsi Gabbard. Like Tennison, Gabbard is well-known for taking pro-Russian positions and criticizing U.S. foreign policy. During the Russian invasion of Ukraine, Gabbard repeated conspiracy theories about U.S.-funded biolabs in Ukraine. [15]