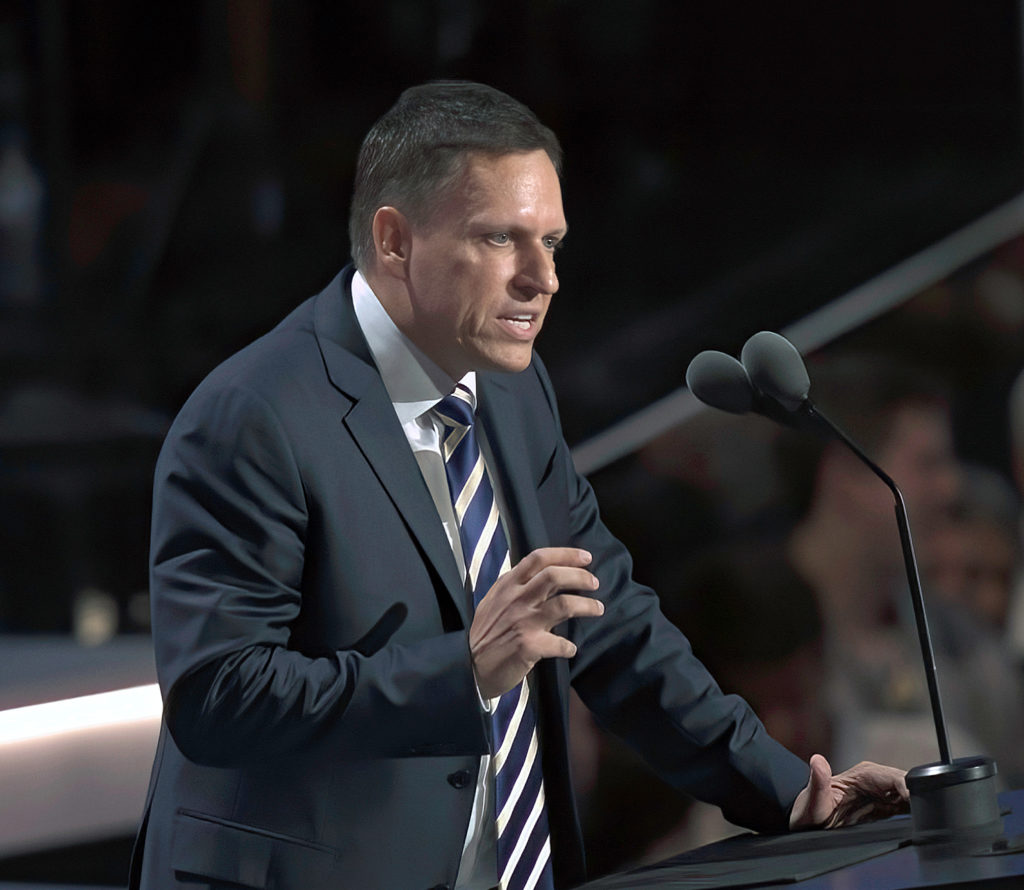 Peter Thiel is a technology investor and a mega-donor to Republican Party candidates. [1] Thiel co-founded PayPal in 1998 and in 2004 was the first outside investor in Facebook. He was on the Facebook corporate board from 2005 to 2022. [2]

Thiel was born in Frankfurt, Germany in October 1967, and his parents moved to Cleveland, Ohio when he was one year old. [5]

Thiel was heavily influenced by French philosopher Rene Girard, who taught at Stanford. Girard believed humans were deeply prone to copy and imitate one another. [8]

Thiel, who has called himself a proud gay Republican, is married to Matt Danzeisen, and they have two adopted children. [9] Thiel owns homes in Los Angeles and Miami. In 2021, he also bought a home in Washington, D.C., valued at $13 million, from former Secretary of Commerce Wilbur Ross. [10]

Thiel was previously a derivatives trader at Credit Suisse Financial Products, a securities lawyer for Sullivan and Cromwell, a speechwriter for former Education Secretary William J. Bennett, and a law clerk for Judge Larry Edmondson of the U.S. Court of Appeals for the 11th Circuit. [11]

Pivoting from law to business, Thiel raised $1 million from friends and family to launch Thiel Capital Management to invest in technology companies. He teamed with Max Levchin to launch PayPal in 1998. [12] After PayPal went public in 2002, eBay bought the company, with Thiel’s share valued at $55 million. He used funds from the PayPal sale to start Clarium Capital, a global macro hedge fund. [13] He is also a co-founder of Mithril Capital Management and Valar Ventures. [14]

In 2004, Thiel was the first outside investor in Facebook, buying a 10 percent interest in Facebook for just $500,000. He was on the Facebook (later known as Meta Platforms) corporate board from 2005 to 2022. [15] [16] Criticizing censorship on Facebook in October 2021, while still a board member, Thiel said, “I will take QAnon and Pizzagate conspiracy theories any day over a Ministry of Truth.” [17]

He launched Palantir Technologies, a data analytics company that that works in national security and global finance. The company went public in 2020. [18]

Thiel is the author of the #1 New York Times bestseller, “Zero to One: Nots to Startups, or How to Build the Future,” which sold about 3 million copies globally. [19] [20]

Thiel is a partner and managing director at Founders Fund, a Silicon Valley venture capital firm that has funded companies such as SpaceX, Airbnb, Affirm, and Stripe. [23]

In philanthropy, he has supported the Human Rights Foundation and the Committee to Protect Journalists. He has also supported GOProud, an organization of gay Republicans, and was a donor to the American Foundation for Equal Rights. [28]

In 1995, Thiel and David Sacks wrote “The Diversity Myth,” which argued against “the extreme focus on racism.” [29] In a 2009 essay for the Cato Institute, a libertarian think tank, Thiel wrote, “I no longer believe that freedom and democracy are compatible.” [30]

Thiel gave $1.25 million to Trump’s election effort and later served on then-President-elect Trump’s transition team. [32] Thiel reportedly recommended about 150 people for jobs in the Trump administration, but Trump only appointed about a dozen of those suggested. [33]

Thiel said while Trump was president: “There are all these ways that things have fallen short. It’s still better than Hillary Clinton or the Republican zombies.”  [34] However, he did not contribute money to President Trump’s re-election campaign in 2020. [35]

Thiel ties Kenneth Griffin of the hedge fund Citadel as the largest individual donor to Republican politicians, according to the New York Times. [37]