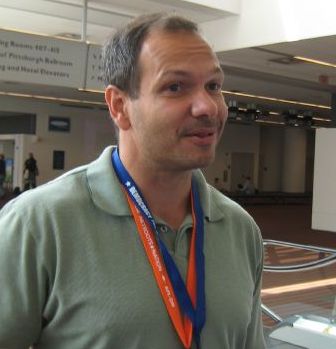 Mike Stark gesturing with his ice (link) by Neeta Lind is licensed CC BY 2.0 (link)

Stark’s methods have been criticized as aggressive. He has been described as a “Democratic tracker,” following Republican politicians and staffers with the aim of recording gaffes and political flubs, a method consistent with those employed by American Bridge.[1]

On October 16, 2018, Stark was arrested after he was accused of “grabbing and yanking” the arm of the female campaign manager for Nevada Republican gubernatorial nominee Adam Laxalt. According to his accuser, Stark attempted to enter a room in the East Las Vegas Community Center in order to film and question Laxalt when he “physically pushed his body on [her] multiple times” and twisted her arm aggressively. Stark was charged by the Las Vegas Police Department with battery and fired by American Bridge shortly thereafter.[2]