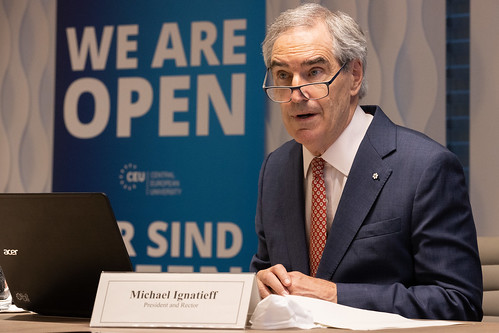 Michael Ignatieff is a writer, former Canadian politician, and former president of the Central European University. [1] He acted and later served as the leader of the Liberal Party of Canada and Leader of the Opposition from 2008 until 2011; he resigned after a “historic defeat” in the 2011 Canadian federal election that had seen the Liberal Party relegated to third-largest and cost it the status of Official Opposition. [2] [3]

His political opponents criticized Ignatieff for referring to Ukrainians in a 1993 book as “little Russians” and writing that Ukrainian independence creates the image of “phoney [sic] Cossacks in cloaks and boots, nasty anti-Semites,” though Ignatieff said the statements were taken out of context. [6] Ignatieff has also been criticized for his comments on the bombing of Qana in Lebanon in 2006, in which civilians were accidentally killed when Israeli forces targeted Hezbollah terrorists. He had said that he was not “losing sleep about that” in a larger statement on the nature of the 2006 Israel-Hezbollah War. [7]

Michael Ignatieff received a BA Honours degree in history at the University of Toronto in 1969. He continued his studies at Harvard University where he earned a Ph.D. in history in 1976. He also earned a Master of Arts degree from Cambridge University in 1978. [8]

Ignatieff began his career as an assistant professor of history at the University of British Columbia in Canada from 1976 to 1978. He was named a senior research fellow at Kings College, Cambridge in England from 1978 until 1984. Ignatieff was a professor of practice and director of the Carr Center for Human Rights Policy at the Kennedy School of Government at Harvard University from 2000 to 2005. [10]

After his time in Canadian electoral politics, Ignatieff returned to education to become a senior resident fellow for Massey College at the University of Toronto from 2011 until 2012. He stayed at the university as a professor for the Munk School of Global Affairs from 2012 until 2013. [11]

Ignatieff was a professor of practice at the Shorenstein Center on Media, Politics, and Public Policy at the Kennedy School of Government at Harvard University from 2013 to 2016. [12]

Soros announced in January 2020 that the Central European University and Bard College were jointly launching the Open Society University Network (OSUN), an international membership group of educational institutions established to promote the ideals of “open society” and to expand access to higher education for underprivileged groups. [16]

Ignatieff called the forced move of the university from Budapest to Vienna a “scandal, absolutely unprecedented and a potentially sinister portent for the future,” adding that there could be a “democratic recession” due to CEU’s move. [18]

Ignatieff was made the official leader of the Liberal Party of Canada in May 2009 without opposition. He unsuccessfully attempted to force an election in September 2009. The election was finally held in March 2011, after the Conservative Party government lost a no confidence vote in Parliament. [20]

Ignatieff’s Liberal Party suffered a “historic defeat,” in which the Conservative Party won 167 seats in parliament, the New Democratic Party of Canada became the official opposition party with 102 seats, and the Liberal Party fell to an all-time low of 34 seats with just 18.9% of the popular vote. Ignatieff resigned as the party leader the day after the election. [21]

Ignatieff has written several fiction and non-fiction books including Just a Measure of Pain in 1978, Blood and Belonging in 1993, and On Consolation in 2021. [22]

During his political career, his political opponents printed a pamphlet that contained excerpts from Blood and Belonging in which Ignatieff referred to Ukrainians as “little Russians.” Ignatieff also claimed that Ukrainian independence creates the image of “phoney [sic] Cossacks in cloaks and boots, nasty anti-Semites.” [23]

Ignatieff claimed that the quotes were taken out of context, claiming his writing was referencing Ukrainian stereotypes. [25]

During an interview, Ignatieff said that “Qana was frankly inevitable in a situation in which you have rocket-launchers within 100 yards of a civilian population,” adding that “this is the kind of dirty war you’re in when you have to do this and I’m not losing sleep about that.” Ignatieff added that the situation was a “tragedy” and “unfortunately a victory for Hezbollah.” [28]

Ignatieff then referred to the bombing as a “war crime” by Israel during a television appearance later in the year. After his Toronto campaign co-chair withdrew his support over the comment, Ignatieff changed his stance, calling himself a “lifelong friend of Israel,” adding that “war crimes were visited on Israeli civilians, and they were visited on Lebanese civilians.” [29]