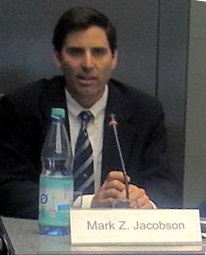 Mark Zachary Jacobson is a professor of civil and environmental engineering at Stanford University. He is notable for having filed and later withdrawn a defamation lawsuit seeking $10 million in damages against a scientific critic of his work on the practicality of converting the entire energy grid to wind, water, and solar power and a journal that published the critic; a District of Columbia court later ordered Jacobson to pay legal fees under the District’s anti-Strategic Lawsuits Against Public Participation (anti-SLAPP) provisions.[1]