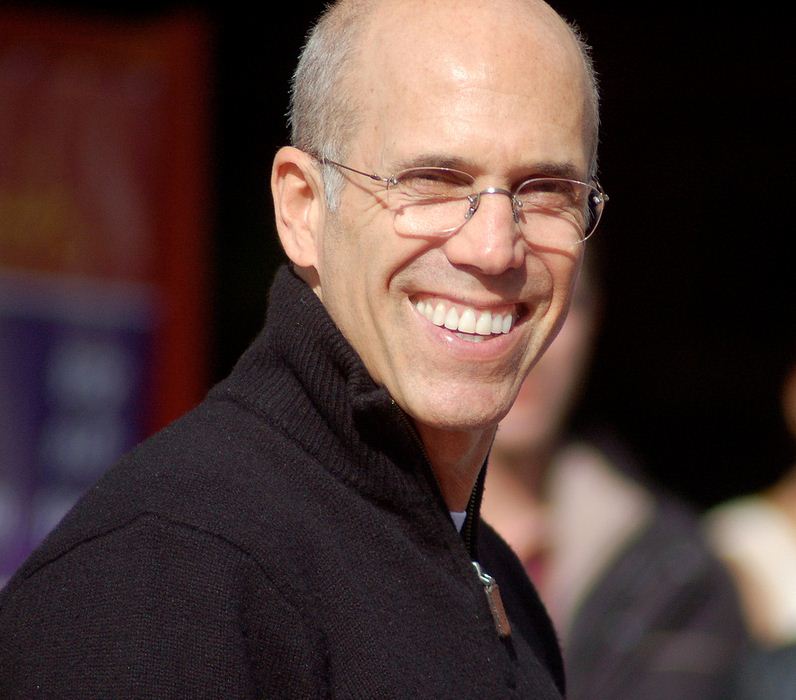 Jeffrey Katzenberg at a ceremony for Hugh Jackman to receive a star on the Hollywood Walk of Fame. (link) by Angela George is licensed CC BY-SA 3.0 (link)

Jeffrey Katzenberg was born on December 21, 1950 in New York City. He is best known for producing Shrek, Shrek 2, and Chicken Run.[1] Katzenberg is a donor to numerous center-left political candidates. In 2008 and 2012, Katzenberg endorsed Barack Obama. He endorsed Hillary Clinton in 2016.[2]

Katzenberg started his production career at Paramount Pictures, and then Walt Disney Studios. In 1994, he left Disney and founded Dreamworks SKG with Steven Spielberg and David Geffen.

Katzenberg grew up in Manhattan and attended the Ethical Culture Society’s Fieldston School. He started at New York University in 1971, but dropped out in 1972 during his sophomore year to work on then-New York City Mayor John Lindsay’s campaign for the Democratic Party presidential nomination.[3] Lindasy’s campaign was unsuccessful. After the campaign ended, Katzenberg worked various jobs before taking an entry-level position at Paramount Pictures’ New York office.

In 1977, he moved to the Los Angeles headquarters of Paramount Pictures to work in programming. One of his first major projects was Star Trek: The Motion Picture in 1979. His later projects include Airplane! (1980), Raiders of the Lost Ark (1981), and Beverly Hills Cop (1984)[4].

In 1984 Katzenberg left Paramount Pictures to work for Walt Disney Studios. He was appointed the chair of film production, during which time he revived Disney Studios. Under his tenure, Disney produced its first animated film in 30 years with the release of The Little Mermaid in 1989.[5] This release was the first in a string of successful releases known as the “Disney Renaissance” of the 1990s.

In October 2017, Katzenberg announced that he is trying to raise $2 billion for a new television startup[9]. Katzenberg’s idea NewTV would consist of short television episodes produced specifically for viewing on a phone or tablet screen[10]. Multiple large technology companies have met with Katzenberg regarding the idea. These companies include: Apple, CBS, Disney, Google, Spotify and Verizon[11].

In 2012, Katzenberg donated $3.15 million to left-of-center super-PACs.[12] This was reportedly almost 30 times more than his 2008 contributions. Katzenberg hosted a number of campaign events for President Barack Obama, and raised more money for the Democratic presidential nominee than anyone else in the state of California.[13] It has been estimated that in the 2012 campaign, Katzenberg gave or raised over $30 million to secure Obama’s reelection[14]. The Sunlight Foundation’s Bill Allison said of Katzenberg, “’it’s hard to think of any other donor going back to the [1990s] or even further who did what he did.’”[15]

After Donald Trump won the 2016 Presidential election, Katzenberg wrote an open letter published in Hollywood Reporter.[16] At the time of his writing the letter, it had been “a week since [the] heart-wrenching, devastating event” of Democratic nominee Hillary Clinton’s loss.[17] Katzenberg noted that he knows Trump and knew Trump’s father from when he worked for Lindsay.[18] He later wrote that he has been involved in politics for 50 years and “this is certainly not the first time [he’s] been on the losing end. It always hurts. And this one maybe hurts more than the rest – partly because we didn’t really lose. Our side got more popular votes.”[19]

While at Disney, Katzenberg had business dealings with film producer and accused sexual predator Harvey Weinstein, especially surrounding the acquisition of Miramax. Shortly after the first on-the-record accusations against Weinstein became public, Weinstein wrote an email to many Hollywood executives, including Katzenberg, asking for support.[20] Katzenberg wrote to Weinstein, “You stated in your email below that ‘A lot of the allegations are false as you know.’ Well actually I don’t ‘know.’” He later wrote “you have done terrible things to a number of women over a period of years.” In the message, Katzenberg appeared to deny prior knowledge of Weinstein’s alleged misdeeds.[21]

Katzenberg has been married to Marilyn Katzenberg since 1975, with whom he has two children.[22]