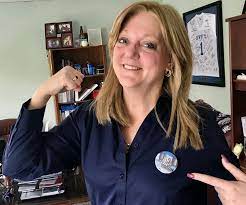 In late 2018, Hochadel served on the transition committee of then Governor-elect Ned Lamont (D-CT). In 2019, Hochadel was elected to co-chair the Inter-American Regional Executive Committee of Public Services International, an international coalition of government worker labor unions. In spring 2020, Governor Lamont’s administration invited Hochadel to speak on the state’s “Reopen Connecticut” panel to address the impact of the COVID-19 pandemic. [3]

On March 9, 2020, Hochadel presented testimony before the Connecticut General Assembly’s Education Committee regarding Connecticut Senate Bill 390, “An Act Concerning Minority Teacher Recruitment and Retention.” Hochadel’s testimony included a description of her experience as a teacher at J.M. Wright Technical High School and maintained that “students of color have better educational outcomes when they are exposed to teachers of color.” In her testimony, Hochadel noted that many of her students called her “mom” and regarded their experience with her very favorably even though she “did not look like their actual mother and had different experiences” due to her race. [4]

On September 20, 2020, the Connecticut Teacher of the Year Council, the Connecticut state chapter of the National Network of States Teachers of the Year, released a video on its YouTube Channel featuring Hochadel and praising the work of the organization and its members. [6][7]