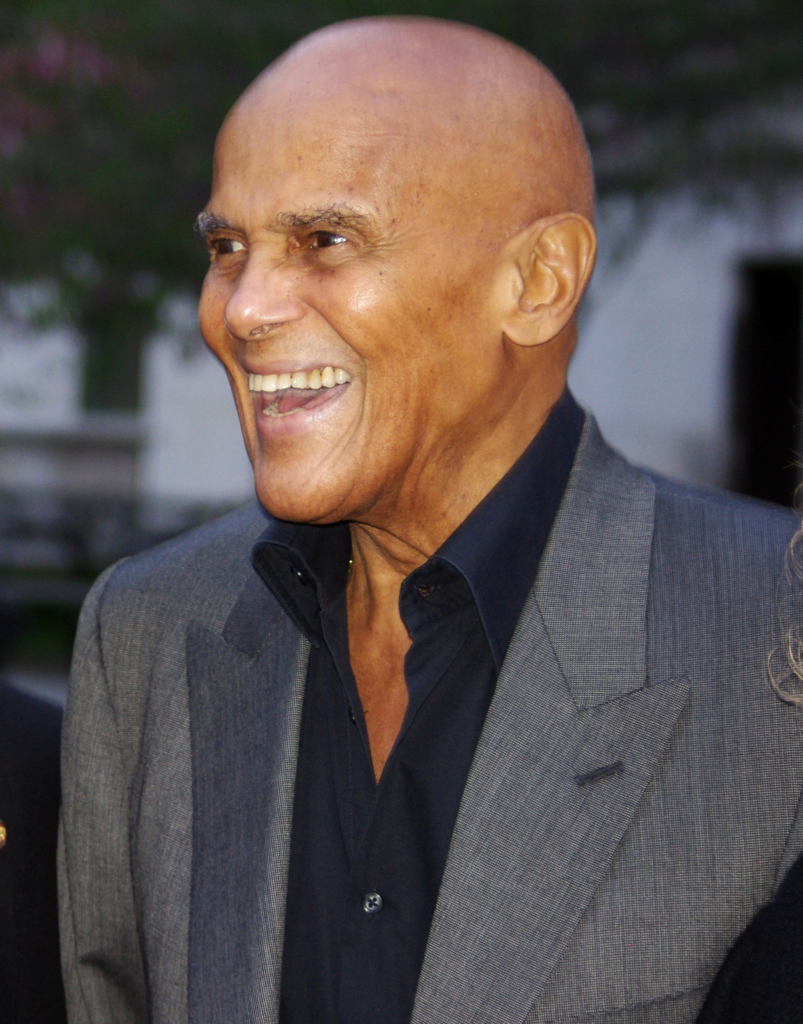 Belafonte-cropped (link) by David Shankbone is licensed CC BY 2.0 (link)

Harry Belafonte is an award-winning African American singer, actor, and liberal political activist from New York City. Belafonte, a veteran of the 1960s Civil Rights Movement, has in recent years endorsed a number of far- and extremist-left positions, at one point in 2012 musing that then-President Barack Obama should “put all these guys in jail” as a means to deal with his political opponents. [1]

The son of Caribbean-immigrant parents, Belafonte was born in Harlem, New York on March 1, 1927. Belafonte’s most famous recordings include “The Banana Boat Song (Day-O)” and “Jamaica Farewell”.

Belafonte’s long history of candid political activism—igniting both praise and controversy—has been a defining aspect of his life. He became a political activist as a young Navy veteran in the 1950s. However, in more recent years, he has made controversial statements about elected officials in the United States, while applauding foreign dictators and the socialist government of Venezuela.

Harry Belafonte was born on March 1, 1927, as Harold George Bellafanti Jr., in the Harlem community of New York City, New York. He had a difficult childhood, and his family lived in poverty. Belafonte’s mother, Melvine, was from Jamaica, and worked as a maid and seamstress; his father, Harold, was from the French-controlled island of Martinique but worked as a chef in the British Royal Navy. [3] [4] Following the divorce of his parents, Belafonte, as a young boy, was sent to Jamaica to live with his grandmother. [5] [6] He lived in Jamaica for eight years, before returning to live in the United States. [7]

Leaving Jamaica as a teenager in 1939, Belafonte moved back to live with his mother in Harlem. [8] Because she frequently left him with a babysitter while she was at work, he did not spend much time with his mother. [9] In high school, Belafonte struggled with a learning disability, so he dropped out of school and joined the U.S. Navy in 1944. [10] Serving near the end of World War II, Belafonte received an honorable discharge from the Navy in 1945 and returned to New York to work as a janitor’s assistant. [11] [12] [13]

In late 1945, Belafonte was given free tickets to see Home is the Hunter at Harlem’s American Negro Theater (ANT). [14] Fascinated by the show, he decided to be a volunteer stagehand at the theater. [15] He also started enrolled in acting classes at the Dramatic Workshop of the New School for Social Research. [16] Soon, he was featured in numerous ANT productions, culminating with him playing the lead role in “Days of Our Youth” during 1946. [17] [18] His musicianship was realized when he sang as part of a class assignment. [19] Monte Kay, a music agent, recognized Belafonte’s talent and invited him to sing at the Royal Roost jazz club. [20] Performing as the opening act for Charlie Parker, Max Roach, and Miles Davis, Belafonte was well-received by the audience. [21] Gaining the respect of famous artists, he secured his first recording deal in 1949. [22] Ditching popular music in the early 1950s, Belafonte created his own niche within the traditional folk genre—drawing inspiration from around the world—and started performing at New York City folk venues, including the Village Vanguard. [23]

In 1953, Belafonte started acting in Broadway productions; one year later, he became the first African American man to win a Tony Award for his role in John Murray Anderson’s Almanac—a musical that included some of his original songs. [24] [25]

Belafonte’s cinematic debut was in 1953, portraying a school principal in the drama movie Bright Road. [26] [27] However, his big break came in 1954, co-starring with Dorothy Dandridge in the musical film, Carmen Jones. [28] Playing a soldier that falls in love with Dandridge’s character Carmen, he was nominated for an Academy Award for his performance. [29] The movie was extremely successful and propelled Belafonte’s singing and acting career. [30] A few years after, he was cast in the lead role of Island in the Sun. [31] The movie sparked outrage when it was released because it depicted an interracial love affair between a black man (played by Belafonte) and a white woman (played by Joan Fontaine). [32] Some municipalities and some cinema owners demanded the film be pulled from the market, and though most demands proved unsuccessful, the film was banned in Memphis, TN. [33]

Belafonte popularized Caribbean folk music with his 1956 album Calypso,[34] the first solo-artist album to sell over one million copies. It included some of Belafonte’s most popular hits, including “The Banana Boat Song (Day-O)” and “Jamaica Farewell”. [35] [36] He went on to collaborate with other popular musicians throughout his musical career, such as Odessa and Bob Dylan. [37]

Despite Belafonte’s success in the entertainment world, he has said that political activism is defining aspect of his life. [41] Belafonte has credited the discrimination against the black population by British colonial officials he saw in Jamaica as a boy, for inspiring him to activism. [42]

After Belafonte’s military service, he was mentored by jazz musician and communist sympathizer Paul Robeson, who significantly influenced his political beliefs and also inspired his activism. [43] [44] Robeson, says Belafonte, showed him that music could be a powerful tool for advancing a political agenda. [45] In a conversation between the two men, Robeson—speaking about political activism—purportedly said to Belafonte, “Harry, get them to sing your song, and they will want to know who you are. And if they want to know who you are, you’ve gained the first step in bringing truth and bringing insight that might help people get through this rather difficult world.” [46]

Belafonte became an activist during the rise of the Civil Rights Movement in the 1950s. [47] While he was participating in the Montgomery Bus Boycott, Belafonte was introduced to Martin Luther King, Jr. [48] He and King became close friends and marched in several rallies together. [49] While King traveled around the United States, Belafonte financially supported King’s wife and children, hiring sitters for the kids and maids to clean the home. [50] He backed the Southern Christian Leadership Conference (SCLC), a civil rights group led by King, raising money for the group’s Birmingham Campaign—which provided bail to those who were jailed for their activism. [51] After King was incarcerated at Alabama’s Birmingham Jail, Belafonte, organizing charity concerts and fundraisers, collected $50,000 for the Birmingham Campaign to bail the civil rights leader out of jail. [52]

Belafonte served as an organizer for the March on Washington for Jobs and Freedom (often shortened to just, the “March on Washington”)—where King delivered his famous “I Have A Dream” speech. [53] [54] Hoping to bring more attention to the event, Belafonte, tapping his high-profile connections in Hollywood, recruited a large celebrity envoy to attend the March on Washington; flying them to Washington, D.C. via a charter flight that he had arranged. [55] “My job was to convince the icons in the arts that they needed to have a presence” at the march, Belafonte said. [56]

In 1961, Belafonte wrote a $40,000 check to the now-defunct civil rights organization, the Student Nonviolent Coordinating Committee (SNCC)—the money helped establish the group. [57] In 1964, he received a late-night phone call from the SNCC president, learning that the organization’s black voter registration program was in dire straits and would shut down in three days hours if it could not get funding. [58] Belafonte quickly started a fundraiser. [59] By day three, he had amassed $70,000 in cash donations; and, to beat the deadline, Belafonte, along with his best friend Sydney Poitier, drove to Greenwood, Mississippi to deliver the money directly to SNCC. [60] During the journey, they were spotted by members of the Ku Klux Klan, who attempted to run them off the road. [61] After receiving assistance from SNCC cars, which shielded their vehicle from the attackers, Belafonte and Poitier reached SNCC’s headquarters, delivering the money ahead of the deadline. [62]

During the Democratic presidential primary in 1959, U.S. Senator John F. Kennedy (D-Massachusetts), determined to win the African American vote, came to Belafonte’s front door pleading for help. [63] Belafonte not only advised Sen. Kennedy on the matter, but also endorsed his candidacy for president. [64] Kennedy went to win the presidential primary by a single point, and some believe that Belafonte’s endorsement was key to his success. [65]

In the 1960 U.S. presidential election, Belafonte starred in a campaign advertisement with Kennedy. [66] With Belafonte’s name-recognition as a celebrity entertainer and an outspoken civil rights activist, the Kennedy campaign tried to appeal to the African-American electorate. [67] In the commercial, Belafonte stated that Kennedy could be trusted to continue the fight for racial equality in the United States. [68] Upon taking office, President Kennedy nominated Belafonte to serve as a cultural advisor to the Peace Corps, an international humanitarian aid program established by Kennedy. [69]

Following the success of the Civil Rights Movement, Belafonte set his sights on addressing issues affecting Africa. [70] In South Africa, he fought against apartheid and strongly supported Nelson Mandela. [71] In the 1980s, Belafonte spearheaded an initiative to record a song with several artists to raise money for a food shortage in Ethiopia. [72] Composed by Michael Jackson and Lionel Ritchie, “We Are The World”, included celebrity vocalists Ray Charles, Diana Ross, Bruce Springsteen, and Smokey Robinson. [73] The song won a Grammy Award and earned several million dollars in sales. [74]

Belafonte, an outspoken critic of the United States’ 2003 invasion of Iraq, sparked controversy in 2002 for comparing two prominent African Americans in the George W. Bush administration, National Security Advisor Condoleezza Rice and Secretary of State Colin Powell, to “slaves who lived in the house” of the “master”. [75] [76] Refusing to apologize or alter his comments, he doubled-down. Rice and Powell, he added in a follow-up interview, were guilty of “serving those who continue to design our oppression.” [77] [78]

In 2006, Belafonte, along with several other celebrities, traveled to Venezuela to meet the country’s late socialist President Hugo Chávez. [79] Speaking on a radio program with President Chávez, Belafonte praised him for transforming Venezuela into a socialist nation, saying “we respect you, admire you, and we are expressing our full solidarity with the Venezuelan people and your revolution.” [80] In dismissing the opinions held by President George W. Bush, who strongly opposed Chávez, Belafonte said the American leader was “the greatest tyrant in the world, the greatest terrorist in the world” for starting the Iraq War. [81] Belafonte yelled, “long live the revolution!”[82]

In an MSNBC interview following President Barack Obama’s reelection in 2012, Belafonte spoke about of his disdain for congressional Republicans who had continued to oppose the president’s agenda. “The only thing left for Barack Obama to do is to work like a Third World dictator and put all these guys in jail,” he said, because they were “violating the American desire.” [83]

Belafonte is the founder of the Gathering for Justice and the Sankofa Justice & Equity Fund, both not-for-profit organizations. [86] [87]

Established in 2005, The Gathering for Justice is a left-of-center social justice organization based in New York. [88]

The Sankofa Justice & Equity Fund is a left-of-center a social justice organization that pairs political activism with “the power of culture and celebrity,” in order to raise “awareness and confront the issues that negatively impact marginalized communities.” [89]

In 2017, Belafonte was designated as an Honorary Co-Chair of the controversial left-of-center group, the Women’s March. [90] Other organizations that he works with include the American Civil Liberties Union (ACLU), Institute for Policy Studies, Rosenberg Fund for Children, and the Sanders Institute, and the United Nations Children’s Fund (UNICEF). He is the celebrity ambassador for the juvenile justice initiative at the ACLU; he sits on the board of trustees at the Institute for Policy Studies; he works on the advisory board at the Rosenburg Fund for Children; he is a fellow at the Sanders Institute; and, he is a Goodwill Ambassador at UNICEF. [91] [92] [93] [94] [95]