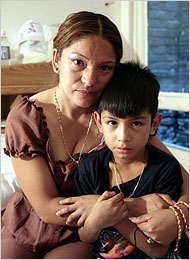 Elvira Arellano is a Mexican-born activist for illegal immigration into the United States. She is the founder of the illegal immigration advocacy group La Familia Latina Unida (“The United Latin Family”) and co-chair of Centro Sin Fronteras (“Center Without Borders”), a related 501(c)(3) organization founded by activist Emma Lozano. La Familia operates as an extension of Centro.

In 1997, Arellano entered the U.S. illegally and was deported to Mexico by U.S. authorities. She successfully entered the country illegally again within days of her arrest, and lived three years in Oregon before moving to Chicago, where she was arrested in 2002 for working under a false Social Security number. [1] Following Arellano’s arrest, the Centro Sin Fronteras formed La Familia Latina Unida to protest her arrest; around this time, Arellano joined Centro. [2] As of March 2017, Arellano has been granted a stay of deportation by a U.S. immigration court.[3]

Arellano was sentenced to three years’ probation and ordered to appear before an immigration court in 2006; instead, Arellano fled to the Adalberto United Methodist Church in Chicago, where she was considered a fugitive from U.S. law. [4]

Elvira Arellano is considered a “co-chair” of Centro Sin Fronteras, although she is not listed as such on the group’s Form 990 tax filings.[5]

In 2017, the Chicago Tribune described Arellano as “the face of the new sanctuary movement, a political strategy in the U.S. that first unfolded in the 1980s, in which churches and synagogues house immigrants. Though churches can’t guarantee protection, they are generally off-limits to law enforcement raids.”[6]

La Familia Latina Unida (“The United Latin Family”) is a Chicago, Illinois-based 501(c)(4) illegal immigration advocacy organization formed in 2001 by Arellano, who is listed as the organization’s president.[7] According to IRS filings, La Familia Latina Unida failed to file a Form 990 tax return for three consecutive years and had its 501(c)(4) tax exemption revoked in May 2017.[8] Its current IRS tax status is unknown. However, the organization continues to operate as a nonprofit, according to filings with the Illinois Secretary of State.[9]

Pueblo Sin Fronteras, another extension from Centro Sin Fronteras which co-organized multiple migrant caravans to the U.S. in 2018,  formerly shared the same Chicago address (2716 W. Division St, Chicago, Illinois 60622) with La Familia Latina Unida, which is the same address as the Adalberto United Methodist Church in which Arellano sheltered. [10] [11]

Following the mass arrest in 2006 by federal immigration officials of 1,187 non-U.S. citizens employed by IFCO Systems, a wooden pallet producer, Arellano went on a 22-day hunger strike “principally to tell [President George W.] Bush to reform the current immigration policies and to keep families together, for workers [sic] rights and an end to deportations.” [12]

During the protest, Emma Lozano, founder of Centro Sin Fronteras, called for “a moratorium to stop deportations” of illegal immigrants in the United States. Lozano said she planned to lead two activist campaigns: “one for mass citizenship training for undocumented immigrants, and another for mass voter registration.” Lozano said, “We need to change America, we are all America.” [13]