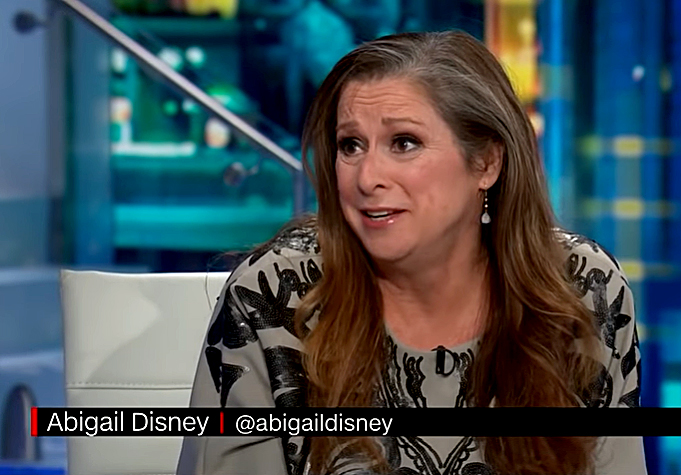 Abigail Disney, a grandniece of Walt Disney, is a liberal activist and, filmmaker. She is the co-founder, along with her husband Pierre Hauser, of the Daphne Foundation and the founder of Peace is Loud, which runs publicity campaigns for her own films.

Abigail E. Disney was born on January 24, 1960 to Patricia and Roy Disney. Roy Disney was the son of Roy O. Disney, the Walt Disney Company’s co-founder and brother of Walt Disney. [1]

In 1991, Disney and her husband Pierre Hauser created the Daphne Foundation (the name derives from a composite of Disney and Hauser’s initials). [2] The foundation funds left-leaning community-centered organizations based in New York City, including African Communities Together, Black Women’s Blueprint, Communities United for Police Reform, Desis Rising Up and Moving, and Justice Committee. [3] Directors of the foundation, aside from Disney and Hauser, include Leah Doyle, Deborah Howes, Yvonne L. Moore, and Ingrid Benedict. [4]

In 2008, Disney founded the non-profit Peace is Loud, which manages publicity campaigns for films and documentaries focusing on prominent women involved in peacemaking efforts. [5] Many of the films which the organization runs campaigns for were directed or produced by Disney herself. [6] Disney serves as the organization’s president. [7]

In 2007, Disney and Gini Reticker, a left-leaning film director notable for serving as an Executive Producer for Citizen Koch (a documentary centering on Charles and David Koch), co-founded Fork Films, a film production company based in New York. [8][9] That same year, with Reticker as director and Disney as producer, Fork films produced the documentary film, Pray the Devil Back to Hell, which focuses on the account of Nobel Peace Prize winner Leymah Gbowee, a Liberian activist heavily involved in the Women of Liberia Mass Action for Peace movement, which was partly responsible for the ending of the Second Liberian Civil War. [10]

Following Pray the Devil Back to Hell, Disney and Reticker collaborated again on the five part PBS series Women, War, and Peace, which aired in 2011 and focused on the role of women in war. [11]

In 2015, Disney executive produced another documentary directed by Reticker titled The Trials of Spring. The film centers on Egypt in the wake of the Arab Spring, especially the role of women protestors and political activists. [12] Also in 2015, Disney directed The Armor of Light, a documentary focusing on the narrative of evangelical minister Rob Schenck, a pro-life activist who, in the film, discusses how his views on abortion relate to his position on gun rights and gun-related crime and violence. [13]

In 2012, citing concerns about profit from the “plunder” and “pillage” of “occupied natural resources,” Disney donated her share of the profits from a Disney family investment in the Israeli cosmetics company Ahava to “organizations working to end this illegal exploitation.” [14]