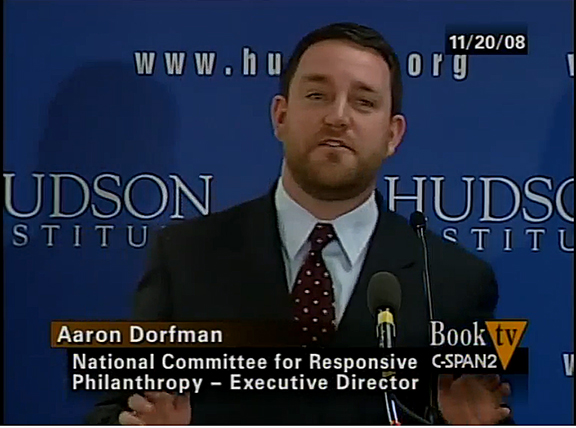 Aaron Dorfman is president and CEO of the National Committee for Responsive Philanthropy (NCRP), a left-of-center advocacy group that monitors charitable spending in the United States. Dorfman formerly worked as a top local organizer for the now-defunct Association of Community Organizations for Reform Now (ACORN), a far-left agitation group, in Miami and Minnesota.

Dorfman was hired as executive director of the liberal philanthropic advocacy group National Committee for Responsive Philanthropy in 2007 and was named president and CEO in 2016. [1]

Dorfman has called repeatedly for foundations to increase their giving above the legally required 5  percent of assets, especially during the COVID-19 pandemic. In March 2020, Dorfman (with Ellen Dorsey, executive director of the Wallace Global Fund) argued that philanthropists should use their assets—which he described as largely “ill-gotten gains from the Trump administration’s tax cuts”—to “promot[e] social justice,” including increasing taxes on capital gains and high incomes. [2]

In March 2021, Dorfman and Dorsey called again for foundations to increase spending to “step up and do more to address inequality, racial and economic injustices, and environmental destruction or fight to maintain a corrupt status quo.” Dorfman and Dorsey argued that foundations that “choose to expand their endowments by massive percentages year-on-year while paying out the bare minimum during multiple global economic, public-health, climate, and societal crises,” will become the targets of “[a]ctivists campaigning to #EatTheRich and #BanBillionaires.” [3] Dorfman has been critical of wealthy business leaders who he alleges seek to whitewash “harmful business practices” that “destroy democracy” through charitable giving. [4]

Dorfman has also been a frequent critic of conservative philanthropy, including the constellation of grant makers and nonprofit organizations associated with the Charles G. Koch Charitable Foundation. Dorfman criticized a Koch-funded program that trains nonprofit executives in business principles as “one stand-alone initiative” that produced positive results, but argued the foundation’s “influence on our society, on balance, … is for sure mostly bad for poor people.” [5]

Dorfman was also a frequent critic of the administration of President Donald Trump, accusing Trump of “hypocrisy” for filling his cabinet and transition team with “insiders and elites,” including wealthy conservative philanthropists. [6] In 2017, Dorfman opposed the Trump administration’s proposed elimination of the federal estate tax (then subject to an $11 million per couple exclusion), arguing that ending the estate tax would “eliminat[e] a major incentive for the large charitable gifts that can make a difference to nonprofit groups and communities around the country.” [7] He called on foundations to fund a “broad-based resistance” to the Trump administration, “from scrappy grassroots organizations, including those that don’t have 501(c)(3) status, to larger, more sophisticated groups.” [8]

From 1997 to 2007, Dorfman was executive director of People Acting for Community Together, a nonprofit organization in Miami that advocates for liberal causes. [9]

While working in Minnesota, Dorfman accused insurance companies of “redlining,” or refusing to write property insurance policies for minority customers in more affluent neighborhoods. Dorfman dismissed a report from the Minnesota Department of Commerce that rejected the redlining allegations as “prov[ing] what they wanted to prove with their investigation.” [12] Dorfman also campaigned against so-called “food deserts” in inner cities, alleging that national grocery chains refused to enter urban markets for both economic and racial reasons. [13]

In 2018, Dorfman joined the board of directors of Capital & Main, a liberal investigative online news journal. [14]

Dorfman was born in Minnetonka, Minnesota, and studied political science with former Sen. Paul Wellstone (D-MN) at Carleton College. He also holds a master’s degree in philanthropic studies from the Lilly Family School of Philanthropy at Indiana University. [15]