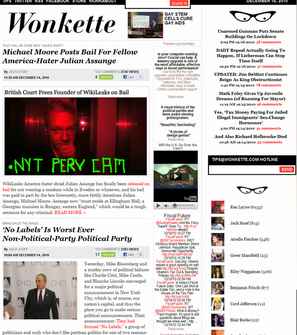 The site achieved infamy in 2011, when a blogger at the site mocked former Alaska Gov. Sarah Palin’s son Trig, who has Down Syndrome.[1] The site has also faced criticism for erroneous reporting, including a false report that then-Mediabistro gossip columnist Betsy Rothstein had been fired in August 2013. Wonkette’s editor, Rebecca Schoenkopf, defended publishing the false story on the grounds that “I wanted it to be true.”[2]

After almost a decade of online writing and editing experience at progressive online magazine Bad Subjects and the website Suck.com, Ana Marie Cox founded Wonkette. Originally her personal blog, a self-proclaimed “blend of gossip and satire and things I make up”[3]  the site soon adopted other writers and developed as a D.C. gossip column. Her blog set itself apart from other D.C. gossip columns largely because of its fearlessness to publish unsubstantiated rumors. Whereas more established newspapers were often delayed or restrained from publishing breaking or scandal stories because of the need to fact-check and decency restrictions, Cox set her publication apart by publishing the information she received when she received it.[4]

The site gained prominence and notoriety after revealing the identity of Jessica Cutler, a former congressional staffer who allegedly received money from an undisclosed Bush administration official in exchange for sexual favors, and blogged about other sexual escapades on the Hill on an anonymous blog, Washingtonienne.[5]

Cox resigned as editor in 2006, was replaced for several months by David Lat and several guest editors until the position was filled permanently by political blogger Ken Layne later that year. In 2012, political gossip columnist Rebecca Schoenkopf purchased the site from Layne and took over the editorship.

Since its creation and as it has taken on more and more writers and changed hands, Wonkette’s tone has shifted significantly. With Schoenkopf at the helm, its status as a D.C. gossip column has dwindled..[6]

Wonkette’s style of personal attack politics has been criticized for preparing the way for the rise of Donald Trump’s 2016 Presidential campaign and liberals’ counterproductive “basket of deplorables” messaging campaign to counter it. Kevin Williamson of National Review noted that Wonkette had written an entire post slagging the physical appearance of otherwise anonymous attendees of a rally hosted by radio talker Glenn Beck.[7]

Wonkette is funded by its readership. In 2011, the site lost numerous advertisers after then-regular columnist Jack Stuef mocked former Alaska Gov. Sarah Palin’s then 3-year-old son Trig for having Down Syndrome, including joking that the boy was the result of incest in the Palin family. Amidst the outrage following the post, many major companies suspended advertising on Wonkette, reportedly including Papa Johns, Huggies, Nordstrom, Bob Evans Farms, Reliant Energy, and Coldwell Banker.[8]

Wonkette was formerly owned by now-defunct controversial liberal blogging conglomerate Gawker Media, but was sold by the company in 2008.[9] It has been owned by its editor, Rebecca Schoenkopf, since 2012.[10]

The key people on Wonkette’s masthead include:

Much of the site’s content is written by these three, but daily contributions come from other writers as well, some of whom publish their work under pseudonyms.