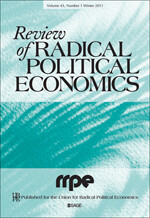 The Union for Radical Political Economics (URPE) is an autonomous collective of activists and academics who use radical-left political economic analysis to analyze social and political problems with the goal of replacing capitalism. [1]

In 2019, URPE had 458 members. While URPE’s membership is international, the organization is based in Amherst, Massachusetts. [3]

URPE was founded in 1968 at the University of Michigan-Ann Arbor. A group of students and faculty from the University of Michigan invited students and faculty from Harvard and Radcliffe College to a meeting to discuss creating an organization to develop and promote radical-left visions of political economy. They expressed hope that an organization would provide radical academics with a support structure to encourage their work after graduation. After the turbulent 1968 Democratic National Convention in Chicago, the members of URPE agreed to begin meeting in person alongside the annual American Economics Association meetings. [4]

In the 1970s, the URPE began to struggle with internal problems, with one member saying that the URPE was turning into “a sectarian battleground.” Claiming that women’s voices were being shut out by the white men who dominated the organization, the URPE formed the Women’s Caucus. A Gay, Lesbian and Bi-Sexual Caucus formed in the early 1980s, and a Third World Caucus formed in the late 1980s. Factions arose between leadership and members, with some claiming there were “levels of stardom among our faculty members, and a system in which it is always the same clique that gets exposure in the bourgeois media.” While around 150 people had attended the 1975 annual meeting, fewer than 90 people attended the 1976 meeting. In 1977, seeking to revive enthusiasm for the organization, the URPE launched the Economics Education Project to solicit articles for publication. The URPE also revised membership rules and costs, and formally incorporated as a non-profit organization. [6] [7]

The URPE acknowledges that it peaked in significance in the 1970s, and that “the importance of URPE in the political economy debate among academics” declined in the 1980s and 1990s as interest in “Marxian economics and radical economics” declined and other journals and organizations arose. [8]

The Review of Radical Political Economics journal has modest reach and impact. According to the IDEAS/RePEc Aggregate Rankings for Journals, the RRPE ranks 810th among Economics journals. [10]

The URPE awards an annual Dissertation Fellowship with $6,500 of financial support for the Fellow. [11]

Union for Radical Political Economics is led by a steering committee, with two people on paid staff. The Steering Committee is composed of 12 members who serve rotating three-year terms. [13]

The national office organizational coordinator is Steve Theberge. Apart from his work with URPE, Theberge’s primary training and occupation is as a stoneware potter, for which he spent years living and training in Zen Buddhist monasteries in Japan and the United States. [14]

The Review of Radical Political Economics Editor is Enid Arvidson, an economics Ph.D. and academic staff member at the University of Texas at Arlington. [15]

In 2018, the Union for Radical Political Economics had $159,811 in revenue, generated almost entirely from membership, subscription, and event attendance fees. While URPE solicits donations, it reported only $955 in donations in 2018. [16]