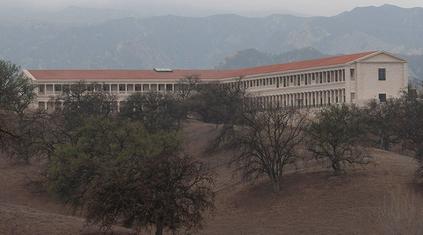 This is a logo owned by Packard Humanities Institute for infobox. (link)

The Packard Humanities Institute is an organization that funds preservation activities in archaeology, literature, music, and film. It was spun off from the David and Lucile Packard Foundation in 1999.

In 1999, the three daughters of David Packard, the technology industry businessman and Nixon administration official who founded the David and Lucile Packard Foundation, allowed David W. Packard to secede from the Packard Foundation with 11 percent, or $1.6 billion, of the Packard Foundation’s endowment. The resultant Packard Humanities Institute has spent down its endowment to $788 million, in part because of grant payout rates that have averaged 9.7 percent over the past five years.

The Packard Humanities Institute has several members of the Packard family on its board. Susan Packard Orr is vice-president, and three Packard family members—Pamela M. Packard, Arianna Packard Martell, and Woodley Packard—are on the board. Another board member is Walter B. Hewlett, heir to Hewlett-Packard cofounder William Hewlett.

David W. Packard has a doctorate in classics and taught classics at the University of California, Los Angeles and other schools before becoming a full-time philanthropist. His first love was film preservation, and his first major philanthropic project was restoring the Stanford Theatre, a classic movie house in Palo Alto, California, that had fallen on hard times.[1]

The Packard Humanities Institute’s principal effort in film preservation was being the primary mover behind the Packard Campus of the National Center for Audio-Visual Conservation, a branch of the Library of Congress located in Culpeper, Virginia. Packard bought the building, formerly used by the Federal Reserve to preserve currency in case of a nuclear attack, in 1997. The Institute spent ten years and $160 million renovating it before donating the building to the Library of Congress in 2007. The donation was the largest made by an individual to the U.S. government since James Smithson provided the endowment for the Smithsonian Institution in 1829. The Packard Campus continues to restore films and has a theatre that regularly shows old films.[2]

The institute has just completed a second film restoration project, completing at a cost of $180 million a building in Santa Clarita, California called the Stoa. It will house and preserve the collections of the UCLA Film and Television Archive, a collection that includes the largest collection of trailers and short subjects and the Hearst Movietone newsreel archive. The expense in part was due to constructing vaults capable of preserving highly flammable nitrate film. The Institute works with the Packard Foundation and the Stanford Theatre Foundation to preserve such classic films as For Whom the Bell Tolls, Meet John Doe, and Felix the Cat silent cartoons.[3]

The Packard Humanities Institute also supports programs in archeology, music, and the preservation of scholarly papers. These projects include preserving Roman and Greek ruins and publishing the complete works of Wolfgang Amadeus Mozart and Carl Philipp Emanuel Bach.

In October 2022, it was announced that Packard Humanities Institute would be working in association with the Opera San Jose to revive and showcase “Cinderella,” an opera composed by British composer and musician Alma Deutscher in November 2022. [4]