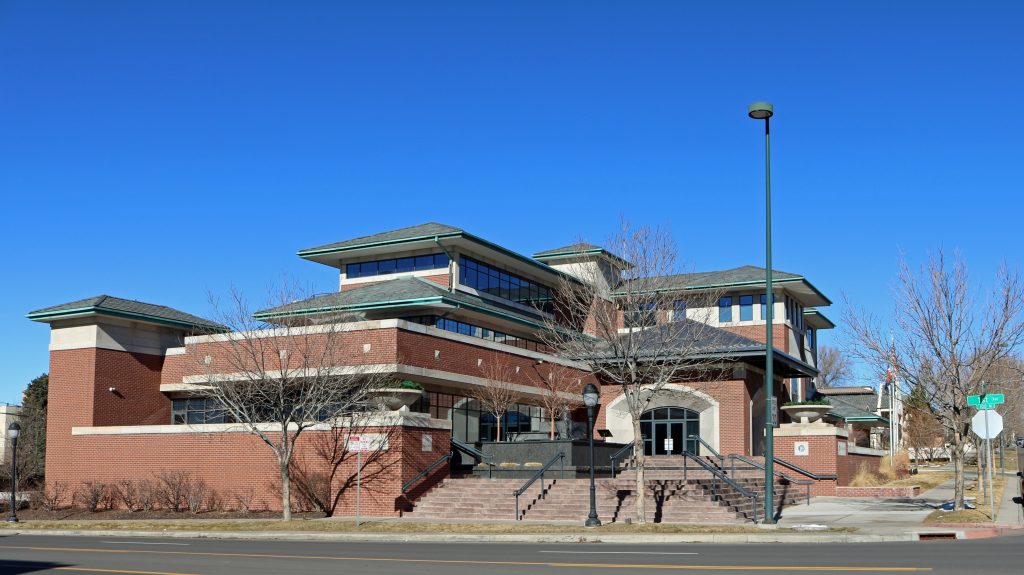 The headquarters of the Daniels Fund, located at 101 Monroe Street in Denver, Colorado. (link) by Jeffrey Beall is licensed CC BY 4.0 (link)

The Daniels Fund is a perpetual foundation created by Robert William “Bill” Daniels, an entrepreneur whose fortune came from commissions made creating and selling cable television systems. The fund primarily supports nonprofits in Colorado, New Mexico, Utah, and Wyoming through scholarships and support for social service organizations. Approximately 10 percent of the Fund’s budget is directed to grants to national public policy organizations.

Robert William “Bill” Daniels was born in 1920. He enlisted in the Navy in 1942, becoming a fighter pilot who served in North Africa in 1942 and in the Pacific between 1942 and 1945. He was awarded the Air Medal three times. [1] In November 1944, Daniels, then serving on the USS Intrepid, rescued wounded sailors from the ship’s burning deck, which earned him the Bronze Star. [2] He was recalled to service for the Korean War, serving as a flight instructor. [3]

Daniels was a Republican who lost a race for governor of Colorado in 1974 and who contributed six-figure sums to the Republican Party in at least two presidential contests. He hired Neil Bush, brother of George W. Bush, in 1987 and 1988 and held a fundraiser for George H.W. Bush in 1987. In 1990, he held a charitable event hosted by then-First Lady Barbara Bush. [7]

“Remember I am a conservative and want no money going to liberal causes,” Daniels wrote in 1998.  “The only thing I have in common with liberals is my concern for the homeless, the poor, and the downtrodden.” [8]

In 1997, Bill Daniels created the Daniels Fund. He designated 11 causes for the fund, designating 30 percent of the fund’s spending be “for scholarships for graduates of high schools” in Wyoming, Colorado, Utah, and New Mexico. Other purposes included supporting “innovative education initiatives,” helping the homeless and the disadvantaged, helping alcoholics and drug addicts recover, assisting the elderly, funding educational programs “which emphasize ethics and integrity,” and supporting amateur sports. [9]

Daniels stated that the Daniels Fund is barred from supporting “research of any kind” and cultural activities. “Most of my giving does not match with symphonies, art, and opera,” Daniels wrote. “I am just not into that. I am into helping people who need help, who are hungry, unclothed, in trouble.” [10]

The Daniels Fund began operations in 2000. According to Daniels Fund president Linda Childears, the fund’s first president, Phil Hogue, “went to experts to see what could be done…We went to big foundations and hired people with expertise on grants and scholarships.” These well-credentialed officials, according to Childears, hired program officers who had impressive resumes (“We hired on credentials,” Childears recalled) but were also aligned with the political left. [11]

These program officers had unlimited power to approve grants up to $100,000 and reject all grants without informing the board. Evan Sparks in Philanthropy noted that, despite Daniels’s distinguished record as a naval aviator, the National Air and Space Museum’s request for grants was rejected because the Fund did not support funding “instruments of war” or devices that “kill people.” [12]

In November 2003, most of the program officers were let go and the Fund cancelled plans to spend $2 million on a new conference center. The board began approving all grants and administering all rejections. The Fund conducted extensive research into the ideas of its founder and commissioned a biography of Bill Daniels that it makes freely available. The National Air and Space Museum has received several donations from the Daniels Fund, including a $3 million donation in 2021 for a new gallery about aviation during World War II. [13]

In 2020 the Daniels Fund reported that it awarded $47.5 million in grants and $21.3 million in scholarships. The fund awards Daniels Scholarships, which cover tuition, room and board, and incidental expenses, to students in Colorado, New Mexico, Utah, and Wyoming. The scholarships are awarded annually but can be renewed for up to four years. The fund says as of March 2021 it had awarded scholarships to 4,600 students that were worth $220 million. [14]