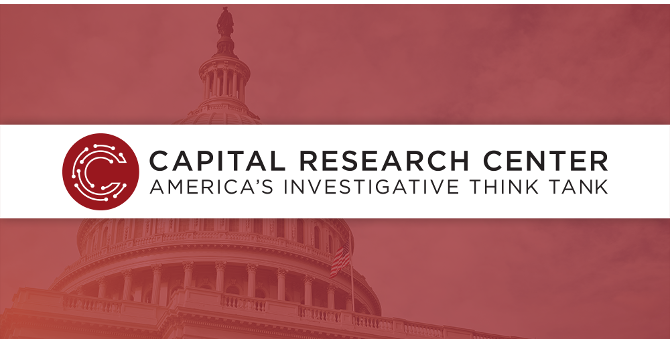 The Capital Research Center (CRC) is a right-leaning nonprofit think tank specializing in the study of policy affecting and influence exercised by nonprofit organizations. The organization was founded in 1984 by Willa Ann Johnson, a Reagan administration official and then-senior vice president of the Heritage Foundation.[1]

CRC is led by the organization’s president, former George W. Bush White House aide Scott Walter, and board chair Michael Franc, who has worked at the Hoover Institution and the Heritage Foundation. [2]

Capital Research Center was founded in 1984 under the direction of Willa Ann Johnson, who had served as a Reagan administration official. During Johnson’s tenure, CRC published Patterns of Corporate Philanthropy, a periodic analysis of the political valence of corporate charitable giving.[3] Johnson was succeeded as president and chair of CRC in 1994 by Terrence Scanlon, the former chairman of the Consumer Product Safety Commission during the Reagan administration.[4]

In 2016, Scott Walter succeeded Scanlon as president of CRC, directing the organization’s day-to-day operations. Michael Franc, director of the Hoover Institution’s Washington, D.C. programs, took over duties as chair of the CRC board of trustees responsible for the institutional governance of the organization.[5]

Capital Research Center engages in research into philanthropy’s interaction with in the public policy process, especially as it relates to the intentions of donors. The group has published books on problems of institutional political behavior and the often unsuccessful protection of capitalist and center-right donors’ intentions,[6] and CRC president Scott Walter has written articles on philanthropic policy.[7]

Capital Research Center is the publisher of the InfluenceWatch website, a repository of information on groups and people involved in public policy advocacy. The research housed at InfluenceWatch has been cited by commentators in the New York Post.[11]

Capital Research Center has received “substantial support” from the Lynde and Harry Bradley Foundation[12] and grants from the John William Pope Foundation[13] and the William E. Simon Foundation.[14] CRC asserts that it takes no funding from governments and performs no contract work.[15]

CRC’s president is Scott Walter, who took office in 2016. A philanthropic consultant and former editor of publications released by the Philanthropy Roundtable and American Enterprise Institute, Walter most prominently served on the Domestic Policy Council in the George W. Bush administration.[16]

CRC is governed by a board of trustees chaired by Michael Franc, a research fellow at the Hoover Institution who has worked for Congressional Republican leadership and the conservative Heritage Foundation.[17] Other CRC trustees include Edwin Meese, who served as U.S. Attorney General in the Reagan administration.[18]