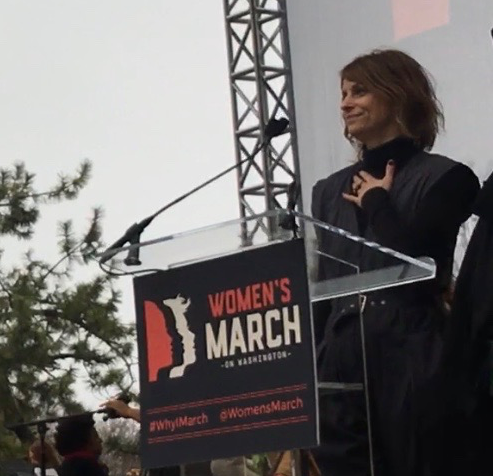 Vanessa Wruble is a left-progressive activist and co-founder of the Women’s March. Shortly after the first march in January 2017, Wruble left the Women’s March organization due to what she alleges were anti-Semitic statements by fellow senior March leadership. [1] Wruble went onto found and work as executive director of March On, which is a splinter group of the Women’s March movement. [2]

Wruble was one of the founders of the Women’s March and was the one who coined the name “Women’s March on Washington.” [3] The Women’s March was formed as a left-wing feminist protest of the election of President Donald Trump. The Women’s March made advocating for “open access to safe, legal, affordable abortion” part of its platform. New Wave Feminists, a pro-life organization, signed up to be a partner of the Women’s March but were later removed from the partners list due to the group’s anti-abortion stance. [4]

The platform also called for civil rights protections and healthcare “without exceptions or limitations” for the LGBT community. [5] Labor rights laws giving rights to illegal immigrants, a path to citizenship for illegal immigrants, and ratification of the Equal Rights Amendment are all policies the Women’s March backed. [6] The 2017 Women’s March included many left-wing partners including Planned Parenthood, NARAL Pro-Choice America, CODEPINK, Moms Demand Action for Gun Sense, and the NAACP. [7]

When forming the team that organized the Women’s March, Wruble wanted to ensure that it did not turn into “a bunch of white women marching on Washington” in part because “53 percent of white women who voted, voted for Donald Trump.” [8] To encourage non-white participation, Wruble approached Michael Skolnik, a left-wing activist, to help find a way to make the march more diverse. Skolnik connected Wruble with Tamika Mallory and Carmen Perez, who became leading figures of the Women’s March. [9]

Wruble would leave the Women’s March organization soon after the first march in January 2017 due to alleged anti-Semitism within the group. [10] Wruble, who is Jewish, told Tablet that she was made the target of anti-Semitic rhetoric by Mallory and Perez during meetings about the march. Wruble told Tablet that at the first organizational meeting Mallory and Perez espoused talking points from Louis Farrakhan’s book The Secret Relationship Between Blacks and Jews. [11] Prominent African-American academic Henry Louis Gates, Jr., has dubbed Farrakhan’s work “the bible of the new anti-Semitism.” [12] At a meeting debriefing what happened during the January 2017 march, Mallory and Perez allegedly were “berating” Wruble with anti-Semitic talk including statements like “your people control all the wealth.” [13]

After leaving the Women’s March, Wruble helped to found March On. [14] Wruble has been the executive director of March On since September 2017. [15] Partners of March On include the ACLU, Rock the Vote, Swing Left, Pantsuit Nation, and Ragtag. [16] March On has opposed the Trump administration’s immigration policies,[17] supported gun control activists,[18] and demanded “full reproductive services” for transgender people. [19] The Advisory Board of March On includes members of Democracy in Color, Democracy Partners, New World Foundation, Be The Change, and Feminist Majority. [20] During the 2018 election, March On endorsed serval Democratic candidates including Stacey Abrams (D-GA), Rep. Lizzie Pannill Fletcher (D-TX), Rep. Kendra Horn (D-OK), Rep. Lauren Underwood (D-IL), and Governor Michelle Lujan Grisham (D-NM). [21]

March On has two notable organizations under its umbrella: Future Coalition and Fight Back PAC. Future Coalition helped organize the Youth Climate Strike to call for government action to stop global warming. [22] Walk Out to Vote, which called on students to walk out of class on election day and go vote, was an initiative of Future Coalition. [23]

Fight Back PAC is March On’s Super PAC[24] and Wruble is a member of its leadership team. [25] Fight Back’s website includes a link to an ActBlue page which takes donations to help defeat incumbent Republican senators the PAC deems vulnerable in 2020. [26] During the 2018 cycle, Fight Back targeted U.S. Representatives including Carlos Curbelo (R-FL), Barbara Comstock, (R-VA), and Will Hurd (R-TX) due to their having taken contributions from the National Rifle Association (NRA). [27]

In 2001, Wruble started her career with WebLab and produced the “Crossover” project. [28] The project’s left-of-center partners included the Sundance Institute and Directors Guild of America. [29] Wruble went onto work for Current TV, a news network founded by former Vice President Al Gore. [30] In 2008, Wruble became a communications consultant for the United Nations. [31]

During her time in college, Wruble became an Echoing Green Fellow in 1996. [32]