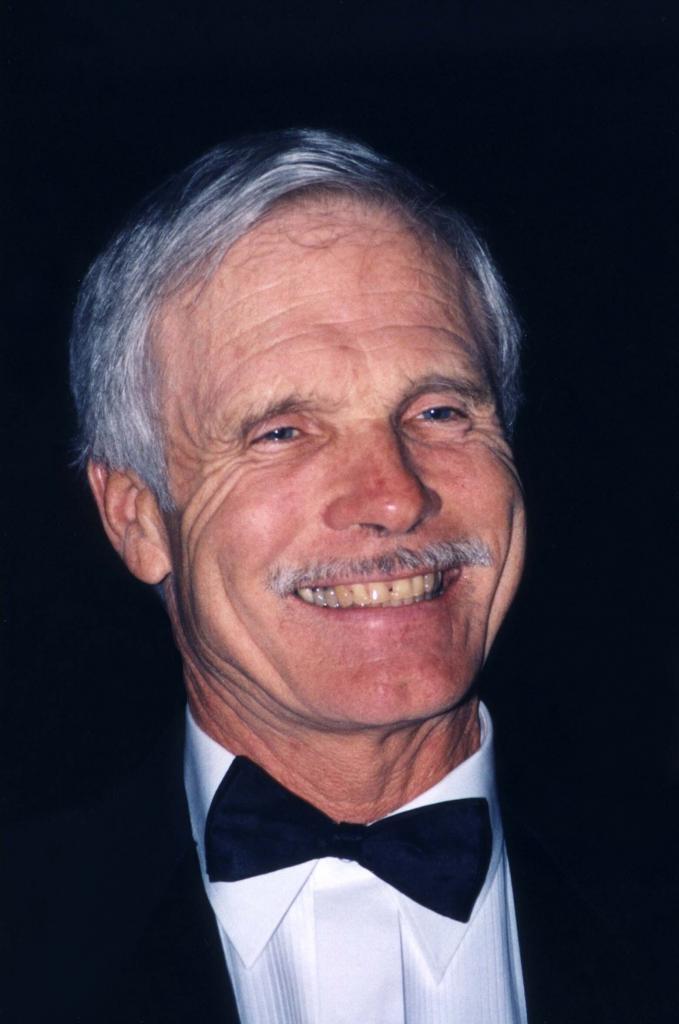 Robert Edward “Ted” Turner III is a billionaire media proprietor best known as the founder of CNN and TBS and a major donor to left-progressive causes, especially environmentalist efforts. Turner retired from active media work in 2006 and is currently the chairman of Turner Enterprises, his investment holding company.

Turner has an estimated net worth of $2.2 billion as of September 2020. [1] He has devoted much of his time and money to his investments and non-profit work. His Turner Enterprises owns thousands of acres of ranchland and environmental preserves in the western United States, making Turner the second largest landowner in North America. Turner has also started and continues to have varying levels of involvement in the Turner Foundation, Captain Planet Foundation, the Turner Endangered Species Fund, the United Nations Foundation, and the Nuclear Threat Initiative.

Though Turner primarily focuses on environmental conservation, he supports curbing human population growth as an environmentalist policy. His major nonprofit foundation, the Turner Foundation, was founded with $125 million to explore and implement population control.

Turner was married to actress and left-wing activist Jane Fonda for ten years. The marriage reportedly influenced Turner to drift toward the political left and become more interested in environmentalism.

Ted Turner was born in 1938 in Cincinnati, Ohio. His father, Robert Edward Turner Jr., owned Turner Advertising, a successful billboard business. Turner Jr. suffered from mood swings and would later be diagnosed with bipolar disorder, an affliction that Ted Turner would inherit. When Ted was aged nine, the Turners moved to Atlanta, Georgia. [2]

Ted Turner attended the McCallie School, an elite boarding preparatory school in Tennessee with a military curriculum. After graduation, Turner intended to join the Navy but was prohibited from doing so by his father. Instead, he began attending Brown University in 1956, but was expelled three years later after being caught with a female student in his dorm room. [3]

In 1960, Ted Turner got his first job as a manager of a branch of his father’s billboard company in Macon, Georgia. Two years later, Turner Jr. executed a large buy-out of a competitor, and the incurred debt nearly bankrupted the company. In 1963, Turner Jr. committed suicide. His son inherited the company[4] which was valued at $1 million[5] as the largest advertising firm in the southeastern United States. [6]

After buying several radio stations, Turner renamed his company to Turner Communications. He soon sold the stations and purchased his first television station in 1969 along with the rights to numerous movies and television shows. [7] In the early 1970s, his channel mostly showed reruns of television shows, but Turner also obtained the rights to broadcast Atlanta Braves and Atlanta Hawks games. [8]

In 1976, Turner began using satellites to broadcast his television station and rebranded again as the Turner Broadcasting Company. [9]

In 1980, Turner launched the Cable News Network (CNN), the first 24-hour news television station. The idea for the station was conceived by journalist Reese Schonfeld, whom Turner hired to run the network. In 1982, Turner ousted Schonfeld and became the CEO of CNN after Schonfeld fired talk show host Sandi Freeman, whom Turner believed to be a great talent. CNN would become profitable by 1986. [11]

With CNN as a cash source, Turner built a media empire. In 1986, he spent $1.5 billion to acquire MGM/UA Entertainment, one of the most prestigious film production companies in the world. However, due to amassed debt, Turner soon sold the company back to the original owner, but kept the rights to 2,200 films which he would display on his television networks. [12]

In 1993, Turner and Russian journalist Eduard Sagalajev launched the Moscow Independent Broadcasting Company (MIBC), the sixth television channel in the new Russian state. Turner eventually sold the company to Russian oligarch Boris Berezovsky. Berezovsky would be forced into exile and to sell the company to the Russian government in 2001 during a media nationalization campaign led by then-aspiring dictator Vladimir Putin. [15]

In 1996, Turner sold Turner Broadcast System and CNN to Time Warner. Turner became vice chair of the company and the cable network divisions,[17] and was the company’s largest shareholder. [18] He would later call the sale the “worst day of my life.” [19]

In 2001, Time Warner was purchased by AOL, and Turner was largely sidelined from company management. Within months of the purchase, the dot-com bubble burst and AOL’s stock price plummeted, costing Turner an estimated $7 billion. [20] Due to pressure from Turner, CEO Gerald Levin resigned and his replacement, Richard Parsons, brought Turner back into a major role in the company. [21]

In 1976, Ted Turner founded Turner Enterprises, a private company to manage his investments. Through the vehicle, Turner amassed thousands of acres of land in the western United States for ranching, especially for buffalo meat which Turner popularized nationally. In 2007, Turner became the largest landowner in the United States,[23] but was surpassed in 2011 by John Malone. [24] As of 2020, Turner is estimated to be the second largest landowner in North America. [25]

While Ted Turner has not explicitly identified himself with a political party, his policy views are generally left-of-center to left-wing. He has referred to himself as a “socialist at heart.” [26]

However, there is evidence that Turner was right-leaning when he was younger and gradually moved to the left. In 1963, Ted Turner joined a Young Republicans club after the death of his father, who had been a member. [27] According to Turner’s son Teddy, his father was conservative and pro-capitalist when he raised his children, but was eventually moved significantly leftward by his third wife, left wing activist and actress Jane Fonda. Also according to Teddy Turner, Ted Turner considered running for president, but Fonda said she would end their marriage if he did. [28]

Over the past twenty years, Ted Turner has been most focused on left-of-center environmentalist policies. His Turner Enterprises has purchased an enormous amount of land for private conservation efforts, while Turner’s philanthropic work and donations to the Turner Foundation, Captain Planet Foundation, Turner Endangered Species Fund, and Nuclear Threat Initiative have all put his environmental goals into practice. [29]

More controversially, Turner has expressed support for human population control as a means of environmental protection. He has stated that he believes the global environment is collapsing due to excessive resource consumption by humanity and that limiting the growth of humanity is the best course of action to save the planet. However, Turner has clarified that he does not advocate for eliminating existing humans for environmental purposes. [30][31]

Turner has expressed regret at the over-politization of the news, especially of CNN, his former project. In a 2018 interview, he said, “I think they’re sticking with politics a little too much. They’d do better to have a more balanced agenda.” [32]

All five of Turner’s children are board members of the Turner Foundation and work with Turner on his philanthropic activity. [35]

Robert Edward “Teddy” Turner IV has outspokenly different political views from his father. In 2013, Teddy Turner ran for Congress in South Carolina’s 1st District as a Republican. At least at the time, Teddy Turner opposed the legalization of gay marriage, supported lower taxes, and was skeptical of the impacts of climate change. While Teddy Turner made light-hearted disparaging remarks about his father at campaign events, he maintained that their relationship was good and their disagreements were purely political. [36] Teddy Turner came in fourth place in the Republican primary with 7.9% of the vote. [37] The winner of the primary and general election, Mark Sanford (R-SC), had previously received a campaign contribution from Ted Turner. [38]

Beau Turner is heavily involved in Turner’s investments and philanthropy. Beau Turner is the director of natural resources and biodiversity of Turner Enterprises, and the chairman of the board of trustees for the Turner Endangered Species Fund. He also sits on the boards of three other environmentalist nonprofits: the Ted Turner-founded Captain Planet Foundation, the Jane Smith Turner Foundation, and the Peregrine Fund. In 2008, Beau founded the Beau Turner Youth Conservation Center. [40]

Laura Turner is also involved in many of Ted Turner’s nonprofit projects. She is the chairperson of the Captain Planet Foundation and Zero Waste Zones. She co-founded Mothers and Others for Clean Air and the Upper Chattahoochee Riverkeeper. [41]

In addition to being on the Turner Foundation board, Sarah Jean Turner Garlington sat on the board of directors of the National Fish and Wildlife Foundation for 12 years. [42]

Rhett Turner is the president of Red Sky Productions, a documentary film production company. Much of his film work has concerned environmental matters, and he has cooperated with the National Wildlife Federation. [43]

In 1990, Ted Turner created the Turner Foundation. The Foundation was funded by $125 million of Turner’s funds and focused on grant giving to initiatives meant to support wildlife via human population reduction. [44] All five of his children sit on the Foundation’s board. [45]

In 1997, Turner and biologist Mike Phillips founded the Turner Endangered Species Fund and Turner Biodiversity Division. The two organizations use the land owned by Turner Enterprises to create and maintain wildlife preserves in collaboration with state and federal agencies. [47] The Turner Endangered Species Fund has received over $185 thousand in support from the federal government. [48]

In 1997, Turner launched the United Nations Foundation with a $1 billion donation, a sum which would not deplete until 2014. [49] The Foundation supports the philanthropic goals of the United Nations. Writing 20 years later, Turner said he donated the sum because he believes the United Nations is the only organization in the world capable of executing effective transnational policy. [50]

In 2001, Turner and Senator Sam Nunn (D-GA) founded the Nuclear Threat Initiative. The organization conducts research and advocates for policies regarding reducing the threat of nuclear weapons and materials. In 2018, the Initiative received a $6 million grant to expand its focus to biosecurity risk from the Open Philanthropy Project, a left-of-center nonprofit run by Dustin Moskovitz and Cari Tuna. [51]

Ted Turner has occasionally donated to political candidates and PACs, usually of or associated with the Democratic Party. [52]

In 2014, Turner donated to Michelle Nunn (D-VA), an unsuccessful Senate candidate and daughter of former Senator Sam Nunn with whom Turner co-founded the Nuclear Threat Initiative. In 2012, he gave $1,000 to the unsuccessful Congressional candidacy of Christie Vilsack (D-IA) and $1,000 to Elizabeth Warren (D-MA). In 2006, Turner donated to then-Senator Joe Biden (D-DE). In 2003 and 2006, Turner donated to the National Restaurant Association PAC, a Republican-leaning PAC associated with a restaurant industry trade group. In 2001, Turner gave $2,000 to the senatorial campaign of Jean Carnahan (D-MO). From 1990 to 1998, Turner gave $21,000 to the National Cable Television Association. The only Republican federal candidate Turner has donated to was Mark Sanford (R-SC), to whom he gave in a 1994 Congressional race. [53]