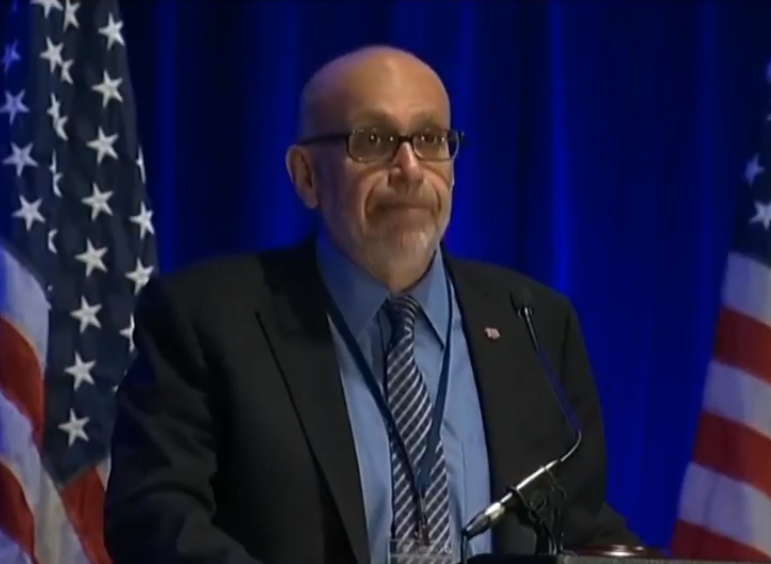 Stuart Appelbaum is president of the Retail, Wholesale and Department Store Union (RWDSU). He is also an executive vice president of the United Food and Commercial Workers union (UFCW), the parent union of RWDSU.

He is also the president of the Jewish Labor Committee and is a board member for the Workers Defense League, ALIGN: Alliance for Greater New York, the Sidney Hillman Foundation, the Rural and Migrant Ministry, the Empire State Pride Agenda, and New York’s Utility Project. [2] [3] [4] [5]

Stuart Appelbaum did undergraduate work at Brandeis University[6] and completed legal education at Harvard Law School. [7] He a member of the bar of the state of Connecticut. [8]

Appelbaum is the current president of the Retail, Wholesale and Department Store Union (RWDSU). [9] Applebaum has had a long union career: Before ascending to the presidency of RWDSU in 1998, Applebaum worked as Secretary-Treasurer, Coordinator of Special Projects, Assistant to the president, and vice-president of the RWDSU. Appelbaum was re-elected as president of the RWDSU in 2002, 2006, 2010, 2014 and 2018. [10] He is also on the Board of Trustees of the RWDSU and Industry Benefit Funds. [11] Appelbaum received $248,030 in gross salary in 2015 but received $277,980 that year in total compensation. He consistently receives over $200,000 in total compensation every year from 2002 for his position at RWDSU. [12]

He is also the current executive vice president of the United Food and Commercial Workers (UFCW), the parent union of RWDSU. Appelbaum also holds the position of senior advisor to the UFCW’s LGBT group OUTreach. [13]

During his time as president of the RWDSU, Appelbaum increased the influence of RWDSU and UFCW. According to his UFCW biography, Appelbaum has pushed the unions to become “forces for economic justice and social progress,” by “forging deep alliances with the progressive movement.” [14] Appelbaum has also stated that the RWDSU will continue to “pursue political action, build coalitions, and run campaigns that advance a progressive agenda.” [15]

Board Memberships and Associations

As the head of a major labor union, Applebaum holds a number of senior positions with left-wing organizations. Appelbaum is a vice-president of the national AFL-CIO and a member of its Executive Council. In this position, Appelbaum co-chairs the AFL-CIO’s International Affairs Committee. He currently serves as a vice-president of the New York State AFL-CIO and is a member of its Executive Committee. [16] Before working with RWDSU and UFCW, Appelbaum worked for the Michigan State AFL-CIO. [17]

He is the president of the Jewish Labor Committee and sits on the Executive Council of the Conference of Presidents of Major American Jewish Organizations. [20]

Appelbaum is an officer of the International Union of Food, Agricultural, Hotel, Restaurant, Catering, Tobacco and Allied Workers’ Associations (IUF), and Union Network International (UNI). He is also president of UNI Global Commerce, a vice-president of the Consortium for Worker Education, and a board member of the Latino Victory Fund. [21]

He also serves on the Executive Committee to the Regional Economic Development Council for New York City after being appointed to the position by Governor Andrew Cuomo (D). He also worked as Executive Assistant to the Secretary of the State of Connecticut. [22]

Due to his close associations with the Democratic Party, Appelbaum has served as a Presidential Elector on at least two occasions. In 2008, Applebaum was an elector for Barack Obama in New York, and in 2016, he was a New York elector for Hillary Clinton. [33]

Appelbaum defended then-New York City Comptroller John Liu (D) in 2013 after his campaign treasurer and one of his top fund-raisers were arrested and charged with wire fraud relating to illegal donations. When news broke that federal authorities wiretapped Liu, Appelbaum called the investigation a “witch hunt.” [34] Liu’s campaign treasurer Jenny Hou and one of his fundraisers, Oliver Pan were both convicted, and Liu himself was eventually fined more than $26,000 for campaign finance violations. [35]

Appelbaum and RWDSU protested the creation of a new Amazon headquarters in New York City. The union president hosted a rally in Manhattan in January 2019, calling Amazon “one of the worst employers, not just in the United States but anywhere in the world,” while also criticizing unions that supported the new headquarters. [36] Appelbaum also claimed people who supported the creation of the Amazon headquarters could no longer call themselves “‘progressive’ or ‘pro-worker’ or ‘pro-union.’”[37] Amazon terminated its plans to create the headquarters, a decision which New York State Budget Director Robe Mujica says Appelbaum and RWDSU influenced. Mujica claims RWDSU “attempted to exploit Amazon’s New York entry,” by organizing workers of the Amazon subsidiary Whole Foods. According to Mujica, the union “deployed several ‘community based [SIC] organizations’ (which RWDSU funds).” [38] Amazon’s decision to terminate its plans for a new headquarters cost New York City “25,000-40,000 jobs.” [39]

Appelbaum held a luncheon in July 2018, for then-Democratic Georgia gubernatorial candidate Stacey Abrams. [40] Abrams, a former minority leader of the Georgia House of Representatives, lost the election with 48.8% of votes to her Republican rival Brian Kemp, who received 50.2% of the votes. [41]