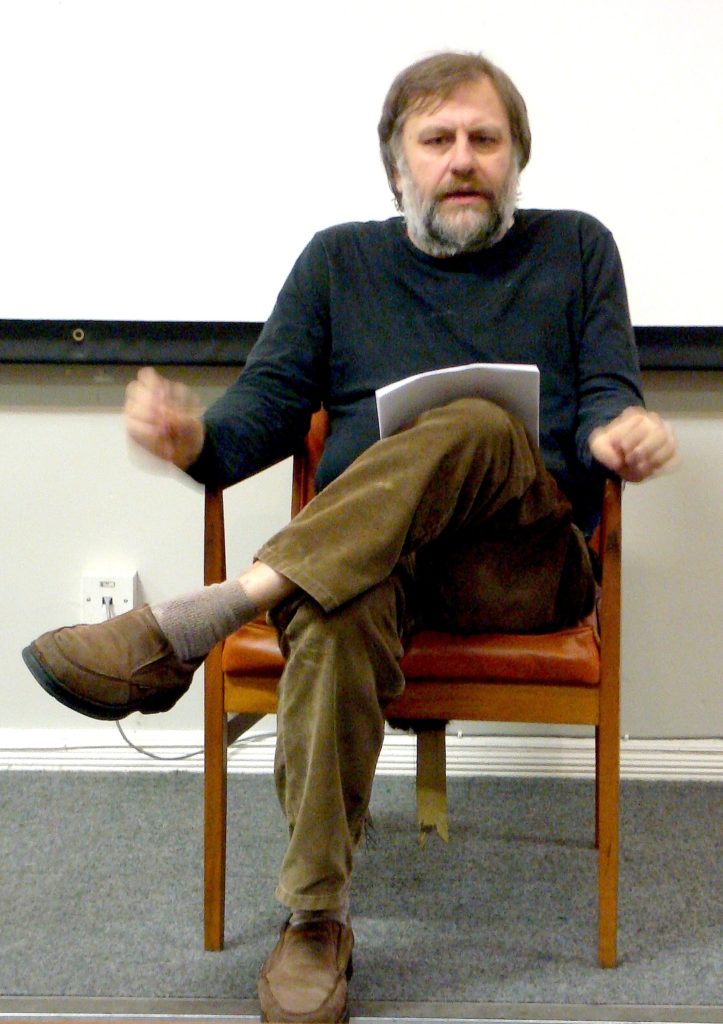 Slavoj Žižek is a Slovenian Marxist-Leninist philosopher who has achieved celebrity status among the radical left. In 2012, the magazine Foreign Policy listed him 92nd on its list of the top 100 “global thinkers.” [1] He has placed a picture of former Soviet dictator Josef Stalin in his living room[2] and advocates for the overthrow of capitalist democracies and their replacement with a communist dictatorship.[3] An admirer of the Reign of Terror leader Maximilien Robespierre and Soviet state founder Vladimir Lenin,[4] he believes that a non-democratic – likely violent – Leninist-style revolution is necessary and considers the defeated communist regimes from the 20th century to have been “a kind of ‘liberated territory.’”[5]

A supporter of violence to attain political objectives and staunch opponent of capitalism and democracy, he has written that “the problem with Hitler was that he was not violent enough” and that it is better to have “the worst Stalinist terror than the most liberal capitalist democracy.”[6] As one example, he argues the Soviet Union’s “brutal” crackdown on anti-Soviet demonstrators during the Prague Spring of 1968 had a positive side because it prevented Czechoslovakia from joining the capitalist West. [7]

He is critical of many left-wing parties and politicians (such as Hillary Clinton[8]) for accepting the legitimacy of capitalism and being too focused on identity politics and social issues.[9] He preferred a Donald Trump victory in the 2016 election because he believed it would break the status quo in U.S. politics and open up new opportunities for the far-left.[10] He has praised U.S. Sen. Bernie Sanders (I-VT) and U.S. Rep. Alexandria Ocasio-Cortez (D-NY).[11]

Slavoj Žižek [pronounced “SLAH-voy ZHEE-zhek”] is a Slovenian Marxist-Leninist philosopher at the University of Ljubljana, and a visiting lecturer at many other universities.[12] The author of more than 50 books, he has a worldwide celebrity status among the radical left[13], and has been praised by left-wing and mainstream media alike as the “coolest and most influential leftist in Europe” (Salon[14]), “one of Europe’s leading intellectuals” (Democracy Now![15]), and the “Elvis of cultural theory” (New York Times[16]). In 2012 Foreign Policy listed him 92nd on its list of the top 100 “global thinkers.”[17]

He admires several of the 20th century’s communist regimes. An interviewer visiting his home in 2012 noted a print of former Soviet dictator Joseph Stalin hanging in the living room.[18] In the 1990s, when offered a post in a government ministry by the Slovenian prime minister, he says he replied that the only jobs he wanted were “minister of the interior or head of the secret police.”[19]

He was a member of Yugoslavia’s Communist Party until 1988, when he resigned after becoming a critic of the nation’s communist regime. Following Slovenia’s reemergence as an independent nation with free elections after the break-up of Yugoslavia, he ran unsuccessfully for the presidency as a member of the Liberal Democratic Party.[20]

“He can be provocative, rude and aggressive,” said a profile in Philosophy Now, explaining his often controversial performances and statements. “Žižek uses many jokes in his works, which he claims illustrate profound philosophical points. They are often racist, sexist, anti-semitic, or combinations of all of these.”[21]

He has said “the problem with Hitler was that he was not violent enough” and that it is better to have “the worst Stalinist terror than the most liberal capitalist democracy.” Examining these opinions and others, a 2008 profile in the New Republic called him the “most despicable philosopher in the West” and a “deadly jester” who “profits from the assumption that the return of ideas that were once the cause of tragedy can now occur only in the form of farce.”[22]

Other reviewers have speculated that his opinions are not necessarily meant to be taken seriously. A sharply critical New Statesman commentary concluded he is “a theory-clown with bloody tears” who may be playing the role of a “philosophers’ Borat [after Sacha Baron Cohen’s character from the 2006 mockumentary Borat], taking ludicrous positions to see how far he can push them.”[23]

Similarly, in 2013 radical leftist philosopher Noam Chomsky dismissed Žižek as a “charlatan” and his theories as “posturing in the place of theory.” In the ensuing public feud, Žižek responded by bringing up Chomsky’s apparent defense of the genocidal Khmer Rouge communist regime that ruled Cambodia in the 1970s. Žižek asserted, “I don’t think I know a guy who was so often empirically wrong!”[24][25]

Žižek advocates for the overthrow of capitalist democracies and their replacement with a communist dictatorship.[26] An admirer of Vladimir Lenin[27], he believes that a non-democratic – likely violent – Leninist-style revolution is necessary. He concedes that prior communist revolutions were a “dismal failure” but that despite “generating terror and misery” they created a space of “utopian expectations” future revolutions could improve upon.[28] Because capitalist democracies are today the norm, he has written that communist regimes founded in the 20th century were and (in cases such as Cuba) are “a kind of ‘liberated territory.’”[29]

Žižek argues the benefits and successes of both capitalism and representative democracy are illusions hiding the failings of capitalist democracies[30] Because “capital has captured politics,” he says truly consequential political questions (such as how capital is controlled) are not permitted as debatable subjects, so democratic choice is an illusion masking battles over comparatively trivial matters (such as social issues) where “capital is indifferent” to the outcome.[31] Similarly, he asserts free choice in a competitive marketplace is often “unfreedom,” where something communists believe should be certain (guaranteed employment, a pension, universal government healthcare) is replaced by choices an individual must make to obtain and maintain such benefits – that we “experience freedom as a burden that causes unbearable anxiety.”[32]

His alternative to democratic change is communist revolution that would overthrow capitalism and impose communism. Justifying this anti-democratic argument with examples from the capitalist marketplace itself, he points to innovators such as Henry Ford and Apple co-founder Steve Jobs, who brought about marketplace revolutions not by providing the masses with what they might have voted for (faster horses or faster computers), but instead what they didn’t even know they needed and wanted (automobiles and iPhones).[33]

Žižek often cites historical examples of political violence initiated against both ideological adversaries and innocent civilians as tactics that must be emulated if his revolution is to succeed.

The Reign of Terror

Perpetrators of the French Revolution’s bloody “Reign of Terror” are often sympathetically portrayed by Žižek. In the essay Robespierre or the “Divine Violence” of Terror, he quotes Jacobin leader Louis Antoine de Saint-Just: “That which produces the general good is always terrible.”[34]

“These words should not be interpreted as a warning against the temptation to impose violently the general good onto a society,” observes Žižek, “but, on the contrary, as a bitter truth to be fully endorsed.”[35]

The Soviet Union’s crushing of the 1968 anti-Soviet uprising in Czechoslovakia was an unappreciated virtue, according to Žižek. He argues the “brutal Soviet invasion” possibly “saved” Czechoslovakia from joining the West. Because he suspects Czechoslovakia may have joined the capitalist West, rather than turn to his supposed “dream” of “a new, truly democratic Socialist” state, he argues the Soviet invasion kept the “dream” alive.[36] He has made a similar comparison regarding the communist regime in the People’s Republic of China violently suppressing the 1989 student demonstration in Tiananmen Square.[37]

In his book, Iraq: The Borrowed Kettle, Žižek recounts a wartime atrocity he says was committed by the Communist insurgent Vietcong against South Vietnamese children during the Vietnam War, and endorses it as a tool of revolutionary terror to be emulated.[38]

“There is a will to accomplish the “leap of faith” and step outside the global circuit at work here, a will which was expressed in an extreme and terrifying manner in a well-known incident from the Vietnam War: After the U.S. Army occupied a local village, their doctors vaccinated the children on the left arm in order to demonstrate their humanitarian care; when, the day after, the village was retaken by the Vietcong, they cut off the left arms of all the vaccinated children…. Although it is difficult to sustain as a literal model to follow, this complete rejection of the enemy precisely in its caring ‘humanitarian’ aspect, no matter what the cost, has to be endorsed in its basic intention.”[39]

While historians and journalists have documented acts of violence against civilians committed by the Vietcong, the only documented source for this “well known incident” appears to be a fictional anecdote from the 1979 film Apocalypse Now![40]

Criticisms of the Left

Žižek rebukes most leftist intellectuals and political movements for supporting what he believes are the illusions of democracy that prop up the failures of capitalism. He says his “personal experience is that practically all of the “radical” academics silently count on the long-term stability of the American capitalist model, with the secure tenured position as their ultimate professional goal (a surprising number of them even play on the stock market)” and paraphrases this attitude as “Let’s talk as much as possible about the necessity of a radical change to make it sure that nothing will really change!”[41]

Similarly, he is critical of center-left parties and politicians for failing to directly attack the legitimacy of capitalism and being too focused on identity politics and social issues (LGBT concerns, for example) that do not connect with the economic issues of working-class voters.[42]

For example, he has written the message of the “Clinton consensus” to the American Left in 2016 was “we can concede all your cultural demands . . . without endangering the global market economy – so there is no need for radical economic measures.”[43] He preferred a Donald Trump victory in 2016 because he believed it would break the status quo in U.S. politics, and open up new opportunities for the left.[44]

He believes the “crucial battle” for the U.S. political system and the Left after 2016 is not opposition to Trump, but instead “what happens within the Democratic Party.”[45] He is supportive of left-wing socialists such as U.S. Sen. Bernie Sanders (I – Vermont), U.S. Rep. Alexandria Ocasio-Cortez (D – N.Y.), and “others waiting in the shadows to explode on the US national scene,” as examples of that battle moving in the direction he prefers, while maintaining even they are still not radical enough.[46]

In the summer of 2018 New York University suspended Avital Ronell, a professor of German and comparative literature, following an 11-month investigation in which the school concluded she had sexually harassed a male student over a period of three years. The investigation, which uncovered emails corroborating the allegations, found evidence of both physical and verbal harassment of a sufficiently “pervasive” nature that it was ruled to have negatively impacted the man’s learning environment.[47]

In May 2018, while the investigation was still ongoing, Žižek and several dozen other colleagues and friends of Ronell from many universities authored a letter addressed to both NYU’s president and provost, criticizing the investigation and denouncing the alleged victim.[48]

Conceding they had “no access to the confidential dossier” which detailed the evidence against Ronell, the letter said the professors deplored the damage the investigation was causing her and stated their desire to “register in clear terms our objection to any judgment against her.” The letter cited Ronell’s academic credentials extensively and dismissed the claims of the accuser, stating “some of us know the individual who has waged this malicious campaign against her” and that the allegations “do not constitute actual evidence.”[49]

Some of the signatories, such as University of California at Berkeley professor Judith Butler[50], later backed away from the letter when more evidence from the accusations against Ronell was revealed by the New York Times.[51] Žižek, to the contrary, issued two public statements, the first one before the New York Times report, in which he pronounced the accusations “utterly ridiculous” and a case of identity politics run amok, based on confidential information he claimed to have regarding the evidence.[52] After the Times story appeared, he doubled down on his support for Ronell, and accused the student of faking the relationship “to get her help in promoting his career.”[53]