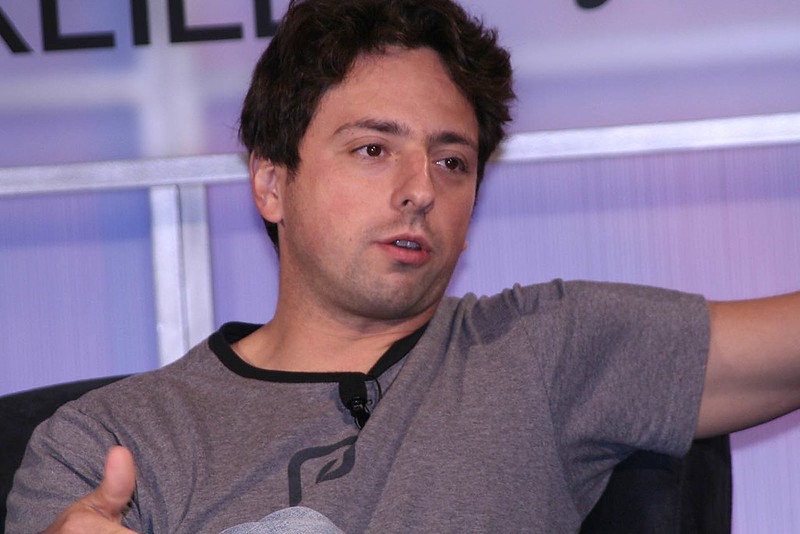 Sergey Brin is a Russian-American billionaire and the world’s seventh-richest person as of early 2021. Brin is best known as the co-founder of Google and its parent company Alphabet. Brin founded Google in the late 1990s with Larry Page, a friend and fellow classmate in the Stanford University computer science Ph.D. program. Google has since become one of the most powerful technology companies in the world, and the company’s success has made Brin and Page among the world’s richest individuals. [1] Brin led Google and Alphabet as president of the companies from Google’s founding in 1998 until December 2019, when Brin and Page both announced that they would be stepping away from daily operations while staying active with the company as board members and controlling shareholders. [2]

Though Brin is not often seen in the public eye and is considered to have a relatively low profile,[3] Brin is active in philanthropic giving and has donated substantial sums of money to left-leaning political organizations and causes. Brin has also made donations to Democratic organizations, including the Democratic National Committee and former President Barack Obama’s reelection campaign. [4] Brin supports other left-of-center causes through the Google Foundation and the Sergey Brin Family Foundation. [5]

Sergey Brin was born in 1973 in Moscow. Brin’s father was a Jewish math professor in Moscow and his mother was a research scientist. His family left Russia in 1979 to escape the persecution of Jews by the Soviet regime and ultimately settled in the United States. Brin attended the University of Maryland-College Park, earning an undergraduate degree in mathematics and computer science before attending Stanford to pursue graduate computer science studies. [6]

While at Stanford, Brin met Larry Page, and the two developed a friendship centered around arguments over their views on mathematics, computers, and other various issues such as urban planning. The two began to work on a project together to rank pages based on how often they were linked to one other on parts of the World Wide Web. Brin and Page developed an web crawler that would pull links among the estimated 10 million web pages on the internet at the time, and Brin developed an algorithm that would rank those webpages based on importance. The PageRank algorithm led to the creation of the Google search engine, which led Page and Brin to take a leave of absence from Stanford’s Ph.D. computer science program to pursue Google as a business. [7]

Brin’s 1996 resume remains active on Stanford’s online archives. The webpage resume outlines several early computer science projects that he worked on and is notable for jokes Brin hid in the source code of the page that he was looking for a job with “a large office, good pay, and very little work. Frequent expense-account trips to exotic lands would be a plus.” [8]

In the years since founding Google, Brin and Page both have been known to maintain relatively low profiles despite their billionaire status. One of Brins most memorable public appearances while leading the company was at the 2012 unveiling of Google Glass, a wearable glasses-like computer device that was developed by the Google SkunkWorks lab called Google X, which Brin led. The demonstration was hailed as one of the most elaborate product demos since the unveiling of the iPhone and featured skydivers jumping into the demonstration while live streaming the jump via Google Glass. The Google Glass device ultimately failed over bad publicity, concerns over privacy, and design flaws. [9]

In 2014, Brin was caught in a public scandal after having an extramarital affair with Amanda Rosenberg, the marketing manager for the Google Glass product. The affair led to controversy at the Google campus and among Silicon Valley tech circles and led Brin to ultimately divorce his longtime wife, Anne Wojcicki. Prior to their divorce, Brin and Wojcicki, who is the CEO of DNA analysis company 23&me, ranked among the top 10 most charitable couples in the world through philanthropic giving from the couple’s family foundation. [10]

Anne Wojcicki is also the sister of Susan Wojcicki, an early employee of Google who offered her garage to Brin and Page to start the company. Susan Wojcicki pushed for the early acquisition of YouTube and now works as YouTube CEO. The fallout from Brin’s affair reportedly led Page to not speak to Brin for some time. [11]

After the 2016 election, far-right website Breitbart leaked a video of a group meeting of Google executives that showed Page and Brin criticizing the election results and then-President-elect Donald Trump to a room full of employees. [12] Brin has made a number of donations to left-of-center organizations and Democratic institutions.

Brin donated $100,000 in support of state recognition of same-sex marriage[13] and personally donated to former President Barack Obama’s reelection campaign and to the Democratic National Committee. Brin has also contributed hundreds of thousands of dollars to left-of-center voter mobilization group My Ride to Vote. [14]

Prior to his divorce from Anne Wojcicki, Brin and his wife supported charities jointly through the Brin Wojcicki Foundation. Despite the couple’s divorce, the Foundation still gifted nearly $50 million in 2018, mostly to San Francisco Bay Area community organizations and education nonprofits such as College Track and K to College. The Foundation also made grants to the Human Rights Foundation, the Tony Blair Foundation, and the Wikimedia Foundation. [17]

In 2014, in light of his separation from Wojcicki, Brin founded the Sergey Brin Family Foundation, which holds over $1.4 billion in assets, mostly in the form of Google stock. The foundation gave nearly $60 million in grants in 2015. Grant recipients included many California-based schools, libraries, and educational programs, in addition to a variety of left-leaning organizations such as the Proteus Fund, the Tides Foundation, ProgressNow Colorado, and the NAACP Foundation. [18]