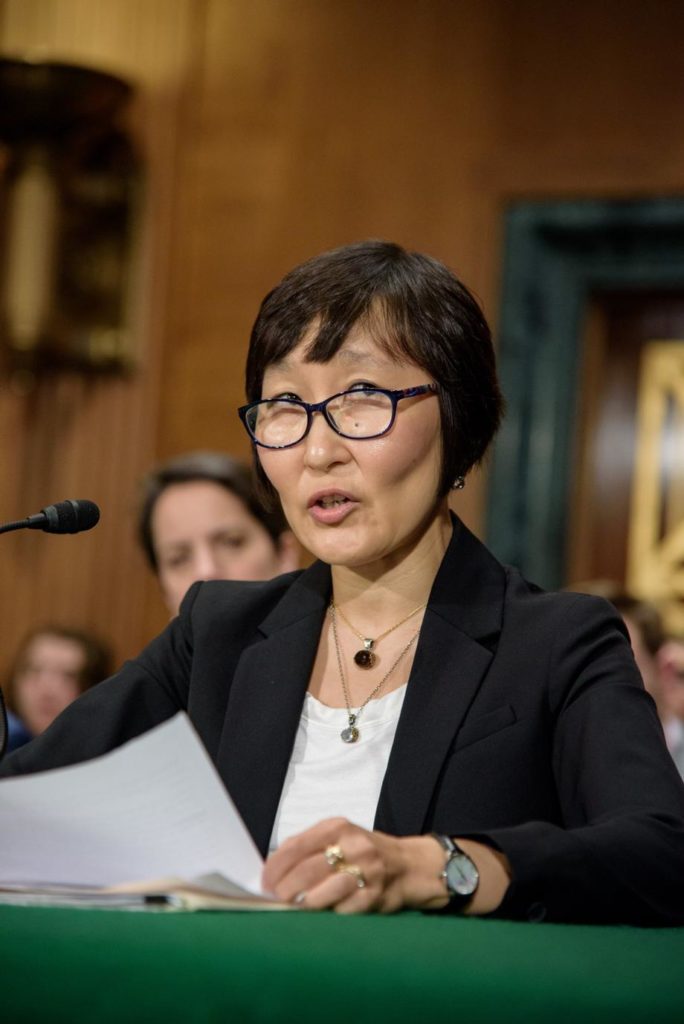 Saule Omarova is a Soviet Union-born lawyer and academic specializing in banking regulations. Her views on financial reform have been characterized as far-left, including proposals to nationalize much of the private banking system. Omarova is a law professor at Cornell Law School.

In November 2021, President Joe Biden announced the nomination of Omarova for the post of U.S. Comptroller of the Currency. Her confirmation process was unexpectedly contentious both due to Omarova’s past and her unorthodox radical-left views on financial matters, leading some critics to accuse her of being a communist. [1] The Wall Street Journal has said that Omarova’s “radical ideas might make even Bernie Sanders blush.” [2] Omarova has denied these characterizations and communist sympathies.

On December 7, 2021, Omarova’s nomination was withdrawn after at least five Democratic U.S. Senators reportedly expressed opposition to her. [3] [4]

Saule Omarova was born in 1966 in the Soviet Union in what is modern-day Kazakhstan. She was raised by her unmarried mother, who worked as a doctor, and her grandmother, whose entire family had been sent to Siberian gulags for failing to join the Communist Party. [5]

Omarova attended Moscow State University as an undergraduate. Her thesis was entitled, “Karl Marx’s Economic Analysis and the Theory of Revolution in The Capital.” The school had an exchange program with the University of Wisconsin-Madison. While Omarova was at UW-Madison for one semester in 1991, the Soviet Union collapsed, and she decided to stay in the United States to earn an M.A. and Ph.D. in political science. Omarova has said that she feels “guilty for having left the country at such a momentous time.” Her Ph.D. was focused on “comparative political economy and… the politics of oil development in post-Soviet Russia and post-Soviet Kazakhstan.” [6] [7]

Though Omarova initially intended to work in academia, she instead got a J.D. at Northwestern University in preparation for a career in law, with a specialty in banking and regulatory law. [8]

Saule Omarova began her career with a six year stint at the financial firm, Davis Polk & Wardell. From 2006-2007, she also served in President George W. Bush’s U.S. Treasury Department as a special advisor on regulatory policy. [9] [10]

At some point, Omarova worked at the University of North Carolina at Chapel Hill as a George R. Ward associate professor of law. In 2014, Omarova began working as a Beth and Marc Goldberg Professor of Law at Cornell University Law School. [11]

In October 2020, Saule Omarova published a paper in the Vanderbilt Law Review entitled, ”The People’s Ledger: How to Democratize Money and Finance the Economy”, which proposed radical changes to the American banking system that critics characterized as a functional government takeover of consumer finance. [12]

Traditionally, the U.S. Federal Reserve (Fed) creates new U.S. dollars by digitally loaning money to major banks, which is a direct way to inject liquidity into the economy, but provides considerable financial benefits to wealthy individuals connected to the financial system at the expense of everyone else via inflation. [13]

In her paper, Omarova proposes “democratizing” this process by essentially absorbing most of the current banking system into the Fed. All citizens would get their own “FedAccounts,” or bank accounts linked directly to the Fed, which would receive newly printed money. These accounts would “fully replace” currently existing private bank accounts. Since this transition would massively reduce the assets controlled by private banks which they normally use to give loans, the Fed would take over these responsibilities for the economy through the National Investment Authority (NIA), a newly formed agency. The NIA which would distribute funds to banks which loan out money in ways preferred by the Fed, thereby allowing the government to steer the private financial system. [14] [15]

Cato Institute scholar George Selgin has criticized Omarova’s financial democratization proposal as a massive nationalization scheme which would have disastrous consequences for the economy by replacing relatively efficient private lending with an inefficient government-managed financial system. [16]

Saule Omarova is an outspoken opponent of cryptocurrencies, primarily due to the potential for private actors to gain control over the currency system. She has said it would be a “scary scenario” if a crypto rose to prominence and one or more major tech companies began to issue bank charters instead of the federal government. [17]

Nomination for U.S. Comptroller of the Currency

In November 2021, President Joe Biden announced the nomination of Saule Omarova for U.S. Comptroller of the Currency. Omarova faced opposition from Republicans, libertarians, and private banks attempting to block her confirmation. [18]

In her confirmation hearing, U.S. Senator John Kennedy (R-LA) accused Omarova of being a communist, citing her upbringing in communist Kazakhstan, her membership in the Kazakh “Young Communists,” her attendance at Moscow State University on a scholarship named after Soviet state founder Vladimir Lenin, her undergraduate degree thesis on Marxism, and her proposals in her economics paper to “democratize” the American financial system. [19] Sen. Kennedy said, “I don’t know whether to call you professor or comrade.” [20]

U.S. Senators asked Omarova to make her undergraduate thesis, “Karl Marx’s Economic Analysis and the Theory of Revolution in Das Kapital” , available to the public. Omarova claims she no longer has copies of her thesis and that the topic was assigned to her. Moscow State University claims her thesis “was destroyed long ago.” [21]

The right-of-center American Accountability Foundation (AAF) found police records from 1995 revealing that Omarova was arrested for stealing $214 worth of merchandise from a TJ Max in Madison, Wisconsin. The charges were later dropped under Wisconsin’s first-offender program. [22] The AAF also uncovered a video from March 2021 where Omarova said she wanted many small oil and gas companies to go bankrupt to combat climate change. [23]

Fox Business reported that as late as 2019, Omarova was a member of a Facebook group called “Marxist Analysis and Policy.” [24]

At her hearing, Omarova denied holding any communist beliefs or voluntary affiliations with communist groups. She testified that much of her family was persecuted and killed by the communist Soviet regime, that her membership in the Young Communists was involuntary, and that she renounced her citizenship after the fall of the Soviet Union. [25] However, Omarova has praised the Soviet Union’s lack of a gender-pay gap and its generous government-mandated maternity leave policies. [26]

Omarova’s critics have been criticized by Democrats and left-leaning groups for being vicious and uncharitable. U.S. Senator Elizabeth Warren (D-MA) referred to Sen. Kennedy’s questioning as “sexism, racism, pages straight out of Joe McCarthy’s 1950 Red Scare tactics.” [27] Media Matters for America (MMfA) claims that private banks are financing or encouraging opposition to Omarova to prevent her confirmation and implementation of policies which will regulate their operations. MMfA said:[28]

The bad faith understanding of Omarova’s views and policy proposals is clear within right-wing media, which are seeking to misrepresent and slander her for her progressive banking policies. Right-wing TV news has been rife with unfair and biased coverage of Omarova that seems to purposefully ignore the content of her idea. [29]

In late November 2021, Axios reported that five Senate Democrats had informed President Biden that they could not support Omarova’s nomination, effectively killing it in the evenly divided Senate. [30] Omarova withdrew her nomination on December 7. [31]