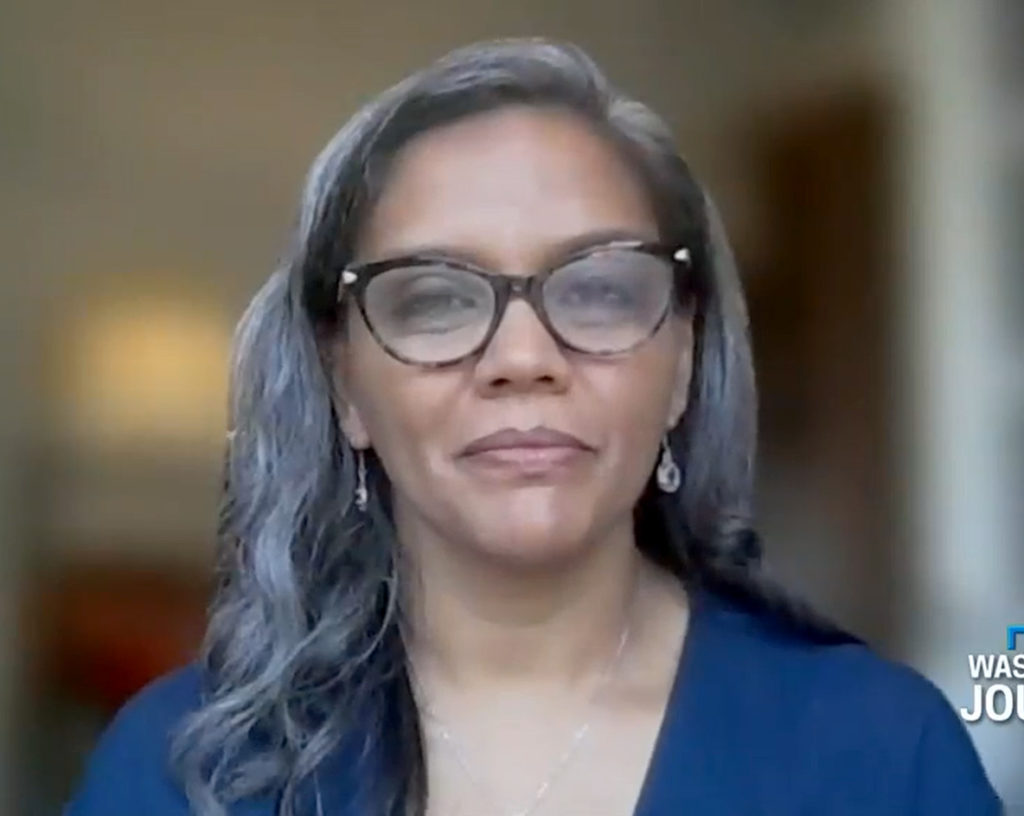 Sarita Gupta is a left-of-center activist who currently serves as the director of the Ford Foundation’s Future of Work(ers) program. Gupta’s radical associations include greeting the 7th National Convention of the Young Communist League. [1]

After graduating college in 1996, Gupta became president of the left-of-center United States Student Association until 1998. She subsequently joined Jobs with Justice, a national coalition of worker centers and left-wing advocacy groups that partnered with the AFL-CIO. [3]

Gupta has appeared at the Aspen Institute and on multiple media networks including MSNBC and Al Jazeera America. [4] [5]

Sarita Gupta was born in the United Kingdom but immigrated to the United States and grew up in Rochester, New York. Gupta graduated from The Harley School, a college preparatory, independent day school in Rochester in 1992. [6] She then attended Mount Holyoke College from 1992 until she graduated in 1996. [7]

After her graduation, Gupta was elected vice-president of the AFL-CIO-funded United States Student Association (USSA) until 1997 before becoming president of the association until 1998. [8] During her time at USSA, Gupta helped develop the Student Labor Action Project,[9] a joint initiative of USSA and Jobs with Justice that promotes student engagement in left-wing economic campaigns. [10]

Gupta currently lives in the Maryland suburbs of Washington, D.C. with her husband and daughter. [11]

After her presidency at USSA, Sarita Gupta became the executive director for the Chicago arm of Jobs with Justice (JWJ), a coalition of worker centers and left-wing advocacy groups formed in 1987 that partnered with the AFL-CIO. [12] During this time, Gupta helped increase the size of the JWJ coalition to over 70 organizations and unions during her time in that position. [13] She fulfilled this role until October 2002 when she began working as a field organizer for the national arm of Jobs with Justice. [14]

Gupta progressed into the role of national field director for JWJ in 2004 until 2007. She oversaw and led strategic programs that promoted left-wing policies[15] on issues such as health care, immigrant workers, and collective bargaining. [16]

Gupta became JWJ executive director in 2007 and carried out that role until July 2018, when she became a Co-Executive Director, a job which she holds at present. [17] She is also Co-Director at Caring Across Generations,[18] a campaign launched in 2007 by the National Domestic Workers Alliance (NDWA) and JWJ that focuses on enacting government-funded care for the elderly and disabled. [19]

In October 2019, Gupta resigned from her role with Jobs With Justice and Caring Across Generations and became the director of the Ford Foundation’s Future of Work(ers) program. [20]

Ford Foundation’s Future of Work(ers) program advocates for economic protections for workers who lose employment due to technological innovation, arguing that innovation will particularly exacerbate inequality for women, ethnic minorities, immigrants, and those with disabilities. [21]

The program advocates for protections from a supposedly growing issue among workers, namely a lack of adequate benefits caused by a lack of representation, including a lack of equity between races and genders. It advocates for social-progressive benefits, such as healthcare, to counter what it describes as the destruction of capitalism. It provides grants in America and internationally to organizations that support its advocacy. [22]

Sarita Gupta appeared as a guest speaker at the Young Communist League (YCL) 7th National Convention in 2002. She was introduced as “coordinator of Chicago JwJ and former president of USSA” and spoke alongside then-USSA president Jo’ie Taylor. [23] [24]

Gupta testified before the U.S. Senate Committee on Small Business and Entrepreneurship on “An Examination of the Administration’s Overtime Rule and the Rising Costs of Doing Business,” in May 2016. [25]

She also spoke at the Aspen Institute on “The Justice System and Jobs: How Court Decisions Are Shaping Americans’ Work Lives” in September 2018. [26]

Gupta spoke at numerous panels and events sponsored by the Obama administration including the White House Summit on Worker Voice, the White House Conference on Aging, and the United State of Women Summit. She also spoke at the 2019 Jerry Wurf Memorial Forum on “Workers, Equality, and Democracy: How Labor and Its Partners Should Think About the Future.” [27]

Gupta has appeared on multiple media networks such as MSNBC, Al Jazeera America, PBS, CNBC, and Fox News. She has had articles published in The Huffington Post, The Hill and BillMoyers.com and is also featured in The Wall Street Journal, Bloomberg, and Politico.

Gupta, alongside the Institute for Policy Studies’ (IPS) executive director John Cavanagh, wrote an article for IPS in 2009 during the Obama administration, calling for a “full-scale emergency relief plan.”[28] that would cost the country “roughly $400 billion.” [29]

Gupta also wrote in a Medium piece titled “As CEOs Distance Themselves from Trump, Their Businesses Continue to Profit from White Supremacy,” that President Trump’s “misogyny, islamophobia, xenophobia, and attacks on LGBTQ Americans,” were not enough for CEO’s to distance themselves from him. She also claimed President Trump has “sympathy for Nazis,” and holds stances “rooted in white supremacy, bigotry, and discrimination.” [30] [31] [32]