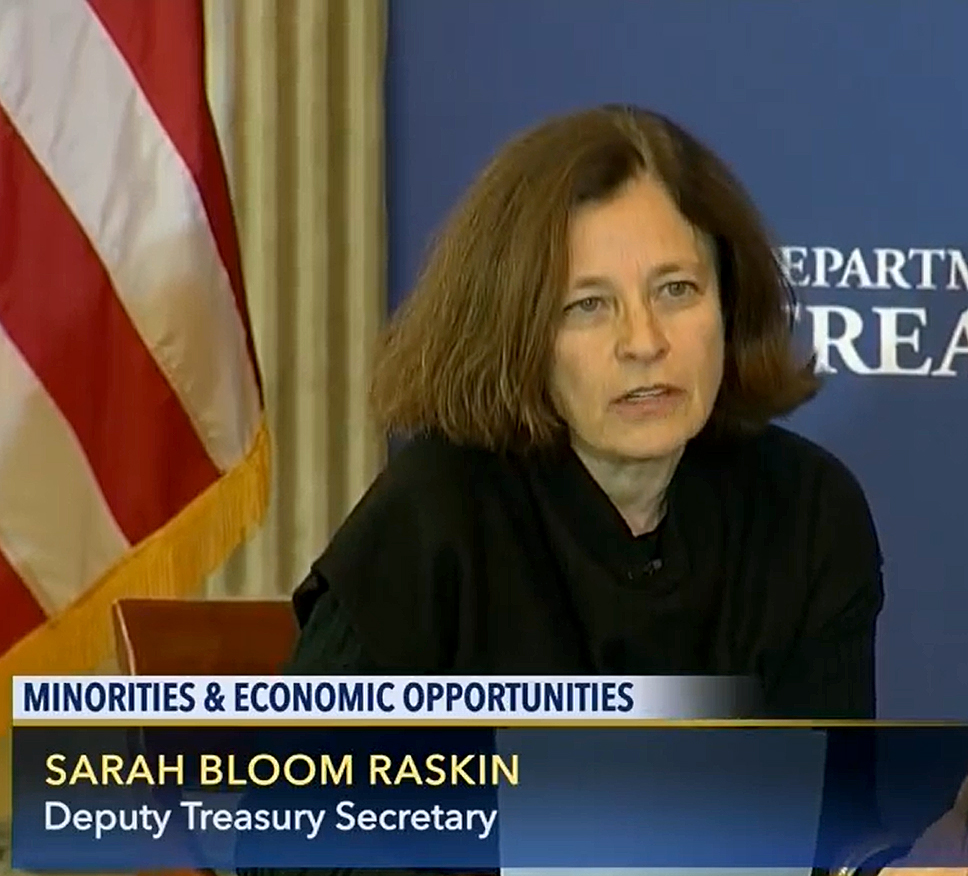 Sarah Bloom Raskin is a lawyer and fiscal policy administrator in Democratic administrations. She was the deputy secretary of the United States Department of the Treasury in the Obama administration, and has also held a seat on the board of governors of the Federal Reserve. In addition to her work at the federal level, she was previously the commissioner of financial regulation for the state of Maryland under Gov. Martin O’Malley (D), where she oversaw the state government’s response to the 2008 financial crash and subsequent economic recession. [1]

In January 2022, the White House announced that the Biden Administration had selected Raskin to rejoin the Federal Reserve Board of Governors, this time as the vice chair of the committee tasked with supervising the board’s activities. [2]

Sarah Bloom Raskin attended Harvard Law School. She has worked for several private law firms, as well as financial institutions such as the WorldWide Retail Exchange and the Promontory Financial Group. She was also a legal advisor on banking issues for the United States Senate Committee on Banking, Housing, and Urban Affairs. [4]

In 2007, Raskin was appointed to head the financial regulation office of the state of Maryland by Gov. Martin O’Malley (D). She held the position until 2010, when President Barack Obama selected her for the Federal Reserve Board of Governors. In 2014, she moved to the Treasury Department, where she served as deputy secretary through the remainder of President Obama’s second term. [5]

In 2017, Raskin joined the University of Maryland law school as a visiting professor. The following year, she was selected for a fellowship at Duke University. In November 2020, the Biden-Harris Transition team first began considering Raskin for a role in the new administration, with media reports suggesting that she was a candidate for the position of Secretary of the Treasury. [6] In March 2021, new reports emerged which claimed that the administration was now considering Raskin for the position of Comptroller of the Currency, the head of the office regulating national banks. [7]

In the lead-up to the 2020 election, Raskin wrote an opinion piece for the New York Times in which she claimed that the fossil fuel industry is “dying” and that the Federal Reserve should avoid implementing any policies that might support it. [8] Around the same time, she co-authored an article in Politico that claimed that the Federal Reserve’s policies were contributing to income disparity in American society. [9]

In January 2021, Raskin wrote an article for the Financial Times in which she claimed that the Federal Reserve should pressure the private sector to fund environmentalist initiatives and divest from the traditional energy industry. [10] A year later, the Biden administration announced that it had nominated Raskin to re-join the Federal Reserve Board of Governors, this time as vice chair for supervision. [11]

In January 2022, Fox Business reported that Republican members of the Senate Banking Committee were apprehensive about the administration’s choice, citing Raskin’s track record of pushing environmentalist causes in her statements and policies. Senator Pat Toomey (R-PA) argued that Raskin would likely go beyond the traditional mandate of Federal Reserve board members and push for central banks to be “actively engaged in capital allocation,” particularly by pressuring them to “choke off credit to traditional energy companies.” Toomey pointed to Raskin’s previous efforts to have the fossil fuel industry barred from receiving bailout funds related to the COVID-19 pandemic. [12]

Around the same time, The Hill ran an opinion piece which portrayed Raskin favorably and criticized her Republican opponents, claiming that Raskin was more of an advocate for capitalism than for government intervention. The article also claimed that the fossil fuel industry would not be able to compete in a true free-market environment, and accused Republicans, not Raskin, of politicizing the allocation of capital. [13]