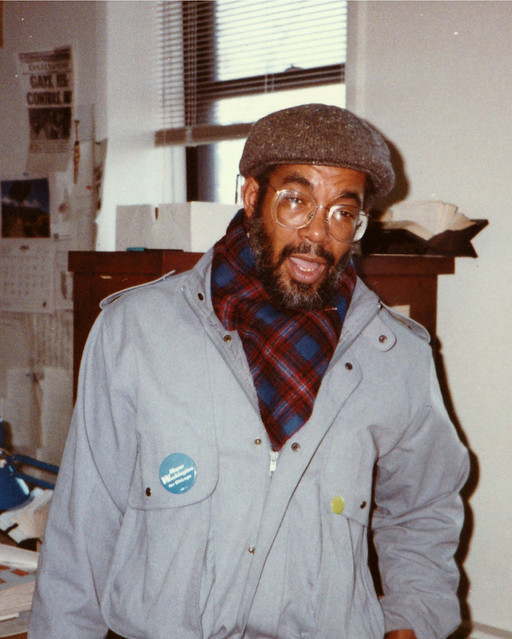 Salim Muwakkil, born Alonzo Canady, is a radical-left political commentator and activist. A former Air Force service member, Muwakkil became radicalized by champion boxer, anti-Vietnam War campaigner, and black nationalist Muhammad Ali during his time in the military. He went on to join the Black Panther Party, a communist and racial-extremist group which was active from the late 1960s to the early 1980s and functioned as the militant vanguard of Students for a Democratic Society, a leading far-left college campus activist organization. He was also a member of the Nation of Islam, a controversial nominally Muslim religious organization with an extensive track record of rhetoric attacking white people and Jewish people. [1] [2]

In the 1970s, Muwakkil was an editor for a black nationalist publication, the Muhammad Speaks – Bilalian News while also working as a news writer for the Associated Press. Muwakkil’s background did not prevent him from becoming a writer and editor for the United States Department of Housing and Urban Development in the 1980s. Muwakkil would go on to become an editor for the socialist magazine In These Times while also contributing to more mainstream publications such as the New York Times and the Washington Post. In addition to his work as a writer and editor, Muwakkil has been a radio show host and a college professor. [3]

Salim Muwakkil was born in New York City in 1947. His birth name was Alonzo Canady, the same as his father. He graduated from high school in 1964 and enlisted in the United States Air Force as an administration specialist. He was in the military for five years, during which he was exposed to the Black nationalist and anti-war views of boxer Muhammad Ali. In a 2016 article for In These Times reflecting on Ali’s legacy, Muwakkil claimed that nearly all Black troops supported Ali’s views and that many Blacks were radicalized during their time in the military. Muwakkil counts himself among those who were radicalized and says that he joined the Black Panther Party as soon as he was discharged from the Air Force in 1969. A short time later, he also joined the Nation of Islam. Muwakkil also enrolled at Rutgers University and graduated in 1973 with a B.A. in political science. He took a job with the Associated Press bureau in Newark, New Jersey. At the same time, he was working as an editor for Muhammad Speaks, a newspaper affiliated with the Nation of Islam, and its successor publication, the Bilalian News. In 1974, he accompanied Muhammad Ali on his visit to Jamaica, and the following year, he adopted the name Salim Muwakkil. [4] [5]

Muwakkil moved to Chicago in the late 1970s. He wrote and edited for the United States Department of Housing and Urban Development and was also a freelance writer for publications including the New York Times and the Washington Post. In 1984, Muwakkil became a senior editor for In These Times, and several years later, a contributing columnist for two of the city’s most prominent newspapers, the Chicago Sun-Times and the Chicago Tribune. Since then, he has appeared on programs such as “Chicago Tonight” and “Beyond the Beltway” and hosted a radio show of his own. Muwakkil also wrote a book about former Chicago mayor Harold Washington (D) and worked as an adjunct professor at the Art Institute of Chicago and Northwestern University. [6]

Throughout his stint at In These Times, Muwakkil has written articles praising the far-left Democratic Socialists of America, demanding race-based taxpayer-funded payments as reparations for slavery, and criticizing President Barack Obama for allegedly not sufficiently advancing left-progressive ideology. Muwakkil has also favorably covered Louis Farrakhan, the controversial current leader of the Nation of Islam, and the 1619 Project, the revisionist history project of far-left activist writer Nikole Hannah-Jones. [7]

In 1999, Muwakkil received a grant from the Open Society Foundations, the flagship grantmaking organization within the international philanthropic and activist network of billionaire and left-progressive ideologue George Soros. The foundation selected Muwakkil to produce a report evaluating the possibility of gang leaders and former convicts assuming leadership roles within black communities; it was titled “Is the Future of Black Leadership Gang Related?” [8]