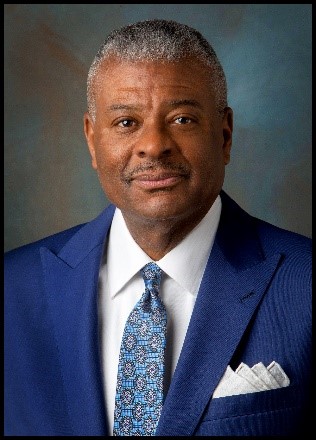 Ron Stroman was nominated by President Joe Biden to the Board of Governors of the United States Postal Service (USPS) and confirmed in May 2021. [1]  Stroman was previously Deputy Postmaster General, where he “spearheaded the organization’s strategic outreach on voting by mail.” [2]

Stroman resigned from his position in 2020 after Louis DeJoy was appointed by President Donald Trump as Postmaster General. [3] In 2020, he became a senior fellow at the left-of-center Democracy Fund. [4] Stroman speculated that DeJoy’s downsizing of the USPS could “disenfranchise” voters in the 2020 election. [5] Stroman met strong public opposition to his own cost-reduction policies while at the USPS, which included closing 82 facilities, firing 15,000 union members, and outsourcing to companies like Amazon. [6]

Early in his career, Stroman worked with the Government Accountability Office, the House Committee on Oversight and Government Reform, [7] the Department of Transportation, [8] and as an aide to former U.S. Representative John Conyers (D-MI). [9]

In 2011, then-President Barack Obama appointed Stroman Deputy Postmaster General making him the highest ranking African American in the history of the USPS at that time. Stroman resigned on June 1st in 2020 after 42 years as a government employee. During his service, he was known as a leader that expanded the conservation culture. [10] His role included collaborating with Congress to make changes to health benefit pre-funding, improving relationships within the mailing industry, developing retail network, and increasing USPS efficiency. [11]

In 2020, Stroman worked with the left-of-center Democracy Fund as a senior fellow. [12] In 2021, President Biden nominated Ron Stroman to the USPS Board of Governors and was approved by the U.S. Senate to serve until 2028. [13]  He also led the USPS agency review during the transition to the Biden administration. His appointment to the board would possibly give the board the chance to replace Postmaster DeJoy. [14]

When Stroman was Deputy Postmaster General, he “spearheaded the organization’s strategic outreach on voting by mail,” [15] and “worked with state and local officials to oversee the expansion of vote by mail.” [16]Those efforts earned him a reputation as someone “who had defended the integrity of voting by mail.” [17]

In an interview with National Public Radio (NPR), Stroman raised questions about the effects of Postmaster General DeJoy’s policies. Stroman claimed that if the policies had any potential to “slow the mail,” they could the “disenfranchise people, voters across the country” and called for them to be “halted.” [18]

Stroman expressed concern that Postmaster General DeJoy’s postal service cost-cutting measures were, “a couple of months before an election with enormous consequences” and called the proposals “a high-risk proposition.” [19] Stroman repeated the charge, claiming that making the changes “less than three months before a presidential election, in the middle of a pandemic, is such a high-risk proposition that it is ill-advised to make those changes right now” and called for them to be “halted, certainly until after the election.” [20] Stroman also cast doubt on the ability to deliver 2020 election ballots on time if Postmaster DeJoy’s cost-cutting measures took effect. [21]

When Postmaster DeJoy decided to suspend changes to the USPS until after the election, Stroman advised the public to “vote early” and claimed that Postmaster DeJoy’s shift “raise[d] more questions than answers.” [22]

While working at the USPS, Stroman’s responsibilities included lowering operating costs, and in 2014, he himself made cost cutting recommendations. After doing so, Stroman was confronted by left-wing protestors who chanted, “no closures, no cuts, no contracting-out.” The crowd opposed the proposed closings of 82 mail facilities that would eliminate 15,000 union jobs. Stroman’s measures included eliminating Saturday delivery, delivery at the door,  and closing mail processing plants and post offices across the United States. Stroman was allegedly also in charge of outsourcing postal services to companies including Amazon, Pitney Bowes, and Staples. [23]

Postal Workers United produced and circulated a flyer with nine questions for Stroman. The questions inquired as to whether the cost-cutting measures were a step to privatize the USPS and whether they would raise revenues by expanding post offices’ functions to include banking services. The group also asked whether the planned delays of mail delivery were illegal. [24]

Stroman outlined his reasons for the cuts, explaining that the USPS the U.S. Treasury $15 billion, faced declining mail volume every year, and had defaulted on its retiree health benefit responsibilities. He also noted that the USPS required $10 billion in revenue for purchasing new sorting equipment and modernizing its fleet. [25]