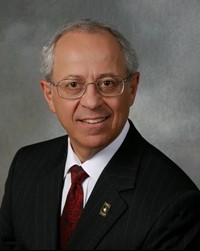 Robert S. Raymar is a New Jersey-based attorney and member of the law firm Hellring Lindeman Goldstein & Siegal LLP. [1] Former President Bill Clinton (D) unsuccessfully nominated Raymar to the United States Court of Appeals for the Third Circuit in 1998, a seat that was later filled by Maryanne Trump Barry in 1999. [2]

Raymar has sat on the Democratic Party-aligned Center for American Progress Action Fund’s Board of Directors since 2017. [3]

Robert S. Raymar studied at Rutgers University, Princeton University, and Yale University, where he served as the editor of the Yale Law Journal. [4] Raymar attended Yale at the same time as former President Bill Clinton and former U.S. Secretary of State Hillary Clinton. [5] Raymar was the national chair of Yale Law School Graduates and Friends for Clinton from 1991 to 2000, 2007 to 2008, and 2015 to 2016. [6]

Raymar sits on the Princeton Internships in Civic Service Board of Directors as the development co-chair to this day. [7]

Raymar’s career included a tenure as law clerk to the United States District Court for the District of New Jersey and United States Court of Appeals for the Third Circuit’s Judge Leonard I. Garth. [8]

Robert S. Raymar is a member of the Board of Directors for a number of organizations. Most notably, Raymar has served as a member of the Democratic Party-aligned Center for American Progress Action Fund board since 2017. [12]