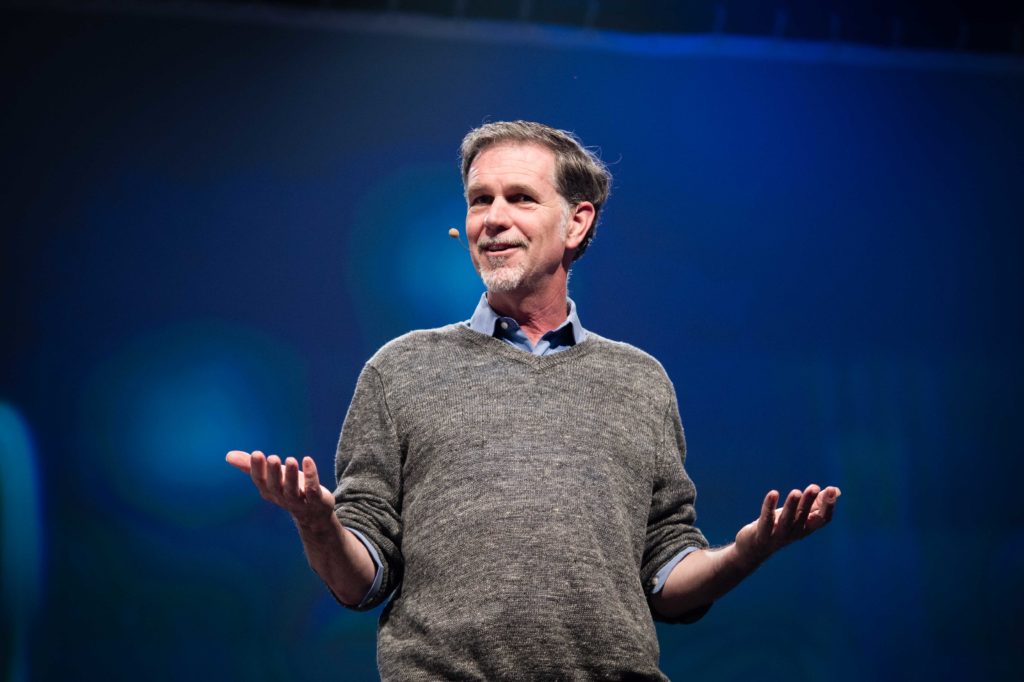 Reed Hastings is the cofounder, chairman, and co-CEO of Netflix and a major Democratic political donor. During the 2016 Clinton presidential campaign, Hastings and his wife, Patty Quillin, raised over $100,000 on behalf of former U.S. Secretary of State Hillary Clinton. [1] In 2020, Hastings and Quillin spent over $5.3 million in support of federal Democratic candidates and committees, including $1.4 million in support of President Joe Biden. [2] The couple also spent over $4.5 million to support left-of-center ballot initiatives in California and over $2 million on high-profile local elections in 2020 alone. [3]

Hastings is also a major philanthropist. Though he directs most of his philanthropic giving through a donor-advised fund with the Silicon Valley Community Foundation and maintains anonymity thereby, Hastings is a noted supporter of charter schools, spending over $200 million in support of expanding school choice and endowing student scholarships across the country. [4] In 2020, Hastings and Quillin donated $120 million to historically black colleges and universities (HBCUs). [5] Recently, Hastings has begun donating to left-of-center organizations focused on race and criminal justice, pledging $5 million to nonprofits that focused on racial issues and donating $1 million to the left-of-center Center for Policing Equity in June of 2020. [6] [7]

Hastings has faced several scandals as the head of Netflix. After censoring an episode of the comedy series “Patriot Act” that criticized the crown prince of Saudi Arabia and hosting a French film accused of promoting pedophilia, Hastings defended Netflix by claiming that it was “trying to entertain” and is not “in the news business.” [8] [9] Hastings has also come under fire for running Netflix in accordance with left-of-center political ideologies. In June 2020, members of the right-of-center Free Enterprise Project (FEP) criticized Hastings for pulling Netflix’s investments out of the state of Georgia in response to the passage of pro-life legislation while investing $8 billion in Egypt, a country in which abortion is outlawed. [10]

Hastings grew up in a suburb of Boston, Massachusetts. Hastings’s father, Wilmot Reed Hastings, worked under former President Richard Nixon in the Department of Health, Education, and Welfare. [11] After graduating high school, Hastings worked as a door-to-door vacuum salesman before attending Bowdoin College, a small liberal arts school. After college, Hastings worked for over a year in the U.S. Peace Corps, teaching math in Swaziland (now eSwatini) before leaving the program. Hastings then attended Stanford, where he received his master’s degree in computer science. [12]

In 1991, Hastings started a software debugging company with Netflix co-founder Marc Randolph that was acquired in the mid-1990s for $750 million. In 1996, Hastings and Randolph developed the idea for Netflix, which opened in 1997. [13]

During his time at Netflix, Hastings has been criticized for his coldness and unconventional management style, with former partner Randolph claiming that Hastings is not “empathetic” and “just doesn’t feel what others feel.” [14] In 2009, Hastings posted a slide deck of Netflix’s internal company policies. The policies revealed that the company sought to get rid of “normal polite human protocols,” instead replacing them with constant feedback sessions in which colleagues criticize each other’s work. [15] Hastings has also been known for firing large numbers of staff members at once, insisting that only outstanding workers can remain at the company. [16] [17] Hastings also instituted a Netflix culture of complete transparency, telling other employees when and why their colleagues were fired. [18]

In June 2018, Hastings drew criticism for not firing Netflix communications chief Jonathan Friedland until months after he had used racial slurs twice. [19]

In 2019, Hastings came under fire after Netflix censored an episode of the comedy series “Patriot Act” that criticized the crown prince of Saudi Arabia after the Saudi Arabian government requested that it be taken down. [20] Hastings defended the decision, claiming that Netflix does not do “truth to power” and justifying the removal on the grounds that Netflix is “trying to entertain.” [21]

In August 2020, Netflix drew criticism for releasing Cuties, a French film accused of promoting pedophilia by telling the story of a group of 11-year-old girls finding “liberation” through sexually suggestive dancing. The American Cuties poster also featured a photo of children in tight, cropped outfits to promote the film. Critics accused Netflix of sexualizing children and promoting pedophilia. When asked to respond to the criticism, Hastings repeated the same line he had used in the “Patriot Act” controversy, telling the New York Times, “We’re not in the news business. We’re trying to entertain.” [22]

In November of 2020, five U.S. Senators confronted Netflix over its decision to produce a television series based on a science fiction trilogy written by Chinese author Liu Cixin. Liu previously defended the Chinese government’s mass internment of Uighur Muslims, claiming that they would be “hacking away at bodies at train stations and schools” if not placed in forced labor camps. The Senators accused Hastings and Netflix of providing a platform for Chinese Communist Party propaganda by supporting Liu. [23]

Hastings has also come under fire for leading Netflix in accordance with left-of-center political ideology. In June of 2020, members of the right-of-center Free Enterprise Project (FEP) introduced a shareholder proposal designed to protect conservative employees as Netflix from viewpoint discrimination. FEP also criticized Hastings for having Netflix express its support for Black Lives Matter in the midst of violent protests and called out Hastings for pulling Netflix investments out of Georgia in response to pro-life legislation while investing $8 billion in Egypt, a country in which abortion is outlawed. [24]

Hastings is heavily involved in philanthropy, especially in promoting changes to the American education system. Hastings has donated to a number of education organizations, though the recipients are not all known due to Hastings’s use of a private donor-advised fund account through the Silicon Valley Community Foundation. [25] Hastings contributed $100 million to the Foundation in 2016. [26]

As of June 2020, Hastings has created his own foundation, the Lone Rock Foundation, to address issues in the American education system. Hastings is currently building a 2,100-acre ranch that will operate as a training center for American public-school teachers set to open in March 2021. Hastings appears to have spent more than $20 million on the project as of June of 2020. [27]

Despite his avowed support for the political left, Hastings is a strong proponent of tough teacher accountability measures and the expansion of school choice programs, generally right-of-center policies that have been heavily opposed by left-of-center teachers’ unions. [28] In 1998, Hastings funded and volunteered for a proposed ballot initiative that would have overturned California’s cap on the number of charter schools allowed in the state. [29] Hastings also formerly served on California’s Board of Education. [30]

Hastings also sits on the board of the Pahara Institute, an education advocacy and networking group that also supports the expansion of charter school programs. [31] Hastings’s new center, once open, will serve as a retreat for educators and school administrators who support Hastings’s positions on education. [32]

Hastings has developed a number of his own charitable foundations to support charter school expansion and other education reforms in the past. In 2016, Hastings started the now-defunct Hastings Fund, which sought to back other educational organizations, with an initial $100 million donation. Two years later, Hastings pulled out of the fund to form the City Fund with hedge fund billionaire John Arnold, initially endowing the foundation with $200 million. Between 2018 and 2020, the City Fund spent over $110 million to advance charter schools around the United States. Hastings and Arnold have also spent $15 million to support candidates who support charter schools in school board elections. [33]

In June 2020, Hastings and his wife gave $120 million to historically black colleges and universities (HBCUs), splitting the donation evenly between Morehouse College, Spelman College, and the United Negro College Fund (UNCF). The donation marked the single largest donation by an individual to support scholarships at HBCUs. [34] The couple also pledged an additional $5 million to nonprofits that focused on racial issues, citing a need to address “racism and injustice.” [35] That same month, Hastings gave $1 million to the Center for Policing Equity, a left-of-center criminal justice advocacy organization focused on alleged racial inequities in policing. [36]

Hastings is a longtime supporter of Democratic politicians. [37] Hastings contributed $88,900 to former President Barack Obama’s campaigns in 2008 and 2012. [38] During the 2016 presidential election, Hastings and his wife were among then-candidate Hillary Clinton’s top supporters, working as campaign “bundlers” to collect donations to the 2016 Clinton campaign. [39] Hastings and his wife raised over $100,000 in support of Clinton’s failed presidential run. [40]

Hastings was an outspoken opponent of President Donald Trump. In June 2016, Hastings claimed that then-presidential candidate Trump “would destroy much of what is great about America.” [41] Hastings also called on venture capitalist Peter Thiel to resign from Facebook’s board of directors after Thiel expressed his support for President Trump, accusing Thiel of displaying “catastrophically bad judgment.” [42]

Once former Vice President Joe Biden received the Democratic nomination, Hastings shifted his support, spending $1.4 million in direct support of the Biden campaign. [45] Hastings and his wife, Patty Quillin, also ranked among the largest donors to Future Forward, a Democratic-aligned super PAC that reportedly spent over $100 million in support of President-elect Biden. [46] Hastings gave an additional $500,000 donation to the Senate Majority PAC in 2020. [47] By the end of the 2020 election cycle, Hastings and Quillin spent at least $5.3 million in support of federal Democratic candidates, not including contributions to organizations that are not required to disclosed their funders. [48]

Hastings and Quillin were among the few major Democratic donors to give to the U.S. Senate runoff campaigns in Georgia, giving $1 million to a Democratic PAC to elect U.S. Senators Jon Ossoff (D-GA) and Raphael Warnock (D-GA). [49]

Nearly all of the Hastings’s California ballot donations in 2020 are under Quillin’s name. Hastings gave $2 million to oppose Proposition 20, a California ballot measure that aimed to increase penalties for property crimes and repeat parole violations. Hastings and his wife were the largest donors in opposition to the measure, matched by Mark Zuckerberg and Priscilla Chan. [53] Proposition 20 failed. [54]

Hastings also contributed to candidates in the Los Angeles Unified School Board race, spending over $1 million in collaboration with fellow donor Bill Bloomfield to support candidates who favored the expansion of California charter schools. [61]